What Is the Difference Between Pho and Ramen?

Asia is absolutely brimming with fabulous noodle soup dishes, each with its own great flavors and story to tell. In Taipei, Taiwan you’ll find beef udon noodle soup on nearly every block. In Bangkok, curry noodle soup and tom yum reign supreme, and China, with all its many regional cuisines, has countless more to discover.

As luck would have it, you can find authentic versions of many of them here in the U.S. if you look, but two in particular, Japan’s ramen and Vietnam’s pho, have enjoyed especially kinetic levels of fanfare. Because both pho phandom and ramen mania have soared way beyond critical mass, we thought it wise to share a brief explainer on these two soulful soups, what makes them special, and exactly how they earned their way into the pantheon of international cult food phenomena. 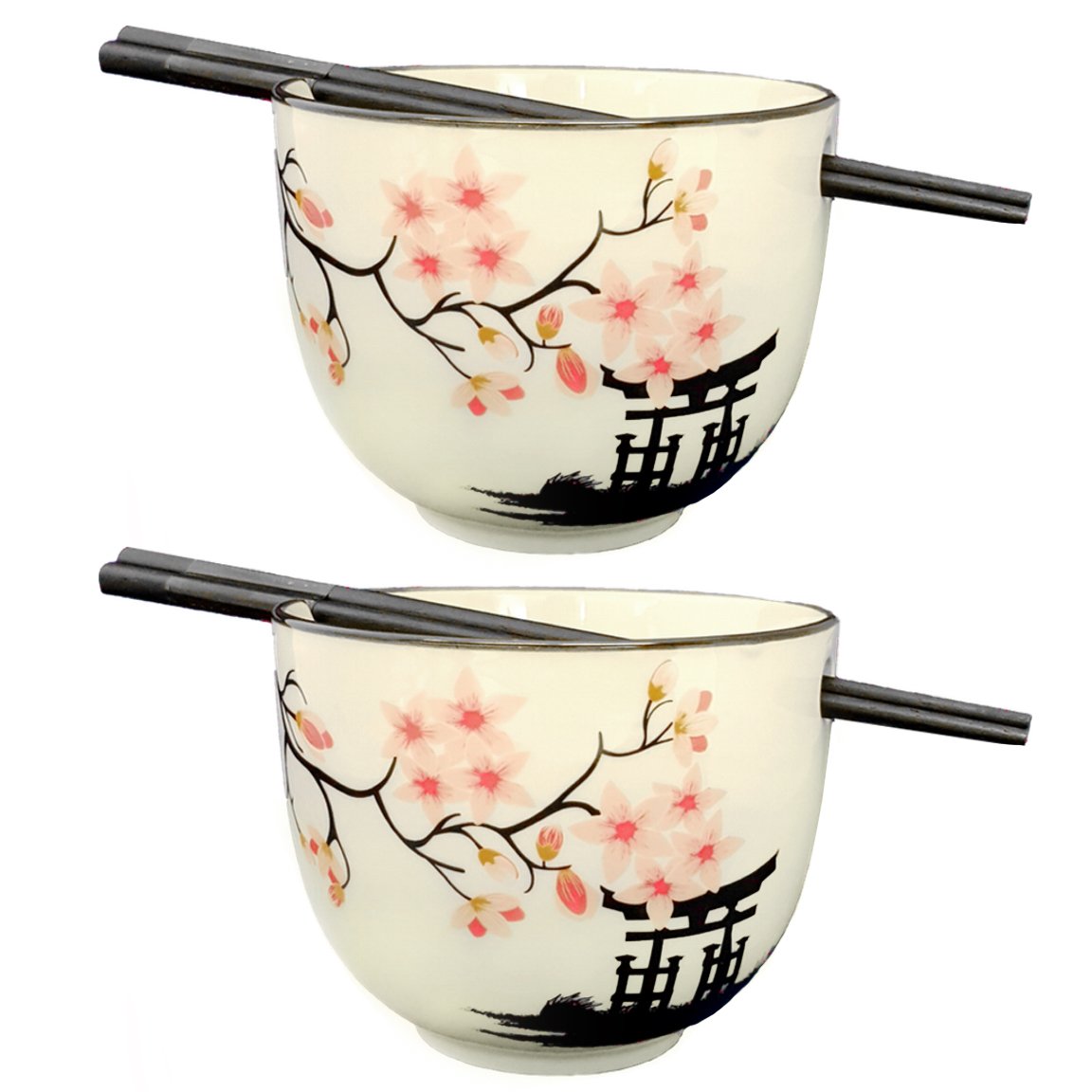 Happy Sales Pink and White Blossom Noodle Bowls and Chopsticks, 2 for $39.99 on Amazon

Serve pho or ramen in these charming bowl sets!

Pronounced “fuh,” pho is a beef and rice noodle soup with mostly clear but flavorful broth, topped with thinly sliced beef, bean sprouts, and fresh herbs, like cilantro. Though the specifics are murky, it is thought to have originated around the turn of the twentieth century in Northern Vietnam just outside Hanoi, and likely evolved from similar dishes. A theory has been floated that the name “pho” was adapted from the French soup called “pot-au-feu.” Vietnam was, of course, under French colonial rule from 1887 until its independence in 1954.

However it began, pho fast became one of the country’s most beloved and widely-eaten street foods, with slight variations depending on the region. After the Vietnam War, and diaspora of Vietnamese refugees, pho was brought lock, stock, and barrel to the global masses, where the verdict from consumers was a resounding yes. Nowadays, you can find it on nearly any Vietnamese menu from coast to coast, including updates, adaptations, deconstructions, and more. In 2016 pho was one of Google’s most searched new food terms, and continues that upward trajectory into 2019.

American pho is served almost ubiquitously with a lime wedge, sliced jalapeños, and Sriracha (an American made chili sauce), while Vietnamese versions may not be served with anything at all, but may also be accompanied by chili pastes, powders, or hoisin sauce.

Like most soups, but perhaps even more so with pho, a straight line can be drawn from good pho to a good and carefully made broth. Starting with a few usual suspects, like beef bones, onions, garlic, and salt, the broth ultimately receives its signature flavor via star anise, clove, cinnamon (pho’s holy trinity), and sometimes lemongrass. A good pho broth is simmered for a minimum of eight hours, ideally more, making it a great dish to order out or take in, unless of course, you’ve got that sort of time and patience to spare—then, by all means, go ahead and pho yourself.  (Also see how pho and bun bo hue compare.)

While pho might be trendier on the global food scene, ramen’s foothold is slightly more pronounced, and certainly much older. You’d be hard pressed not to find at least a couple of  “ramen joints” in just about any American city, with many now celebrating anniversaries of a few decades or more.

Unlike pho, ramen is (traditionally) made using a rich pork or chicken-based broth and firm, springy wheat or egg noodles versus pho’s dainty rice noodle. Though traditional ramen is topped with slightly thicker roast sliced pork, a medium-boiled egg, nori, scallions, and bamboo shoots, countless toppings including seafood, tofu, beef, and chicken are now widely available, both in Japan and elsewhere.

Three distinct base variations have separated themselves from a field of many; the most popular here being Tonkotsu Ramen, with its uncomplicated pork broth and sliced pork, Miso Ramen, marked by the presence of umami-rich miso, corn, and pork belly, and then their saltier cousin, Shoyu Ramen, made from a soy sauce and pork broth and sometimes fish broth.

Ramen, which is thought to have evolved from a Chinese noodle dish brought to the island nation by immigrants in 1859, was greatly modified in Japan to resemble its current look and taste. The popular working-class soup was served in street stalls and food markets, but took on a life of its own following a poor rice harvest in 1945 that opened the door for noodle dishes of all sorts.

Tasty, filling, and relatively cheap, ramen has become a bonafide worldwide sensation, both in its home country and abroad. Don’t believe me? Consult the Shi-Yokohama Ramen Museum which receives thousands of ramen-obsessed every year, and note that every single major region of Japan proudly sports its own unique version. Along with sushi, ramen is easily Japan’s most important and celebrated culinary tradition, and though foodies may scoff, a simple dried version—instant ramen (surely you had a stack in college)—was brought to market by Nissin Foods in 1958 and became a sensation all its own, earning its status as the 20th century’s greatest invention, as voted by the Japanese people themselves.

Much like pho, the success of any ramen is tied directly to its broth, and there is no true shortcut for doing it right. Though different versions of ramen are finished differently, most begin with a master broth of boiled and cleaned pork or chicken bones, garlic, ginger, scallion, and fish flakes or miso. From there, the broth is simmered for as few as six, but as many as twelve hours, or more. On average, ramen broth is slightly thicker and less translucent then pho, mostly from the presence of miso paste, and collagen-rich pork fat. Both are jam-packed with deep flavor, and the broth of each is often what separates a great success from an average attempt, and drives a fervent adoration among diners everywhere.

Eating both ramen and pho can be a delightfully messy and noisy affair. Generally accomplished with chopsticks for the solid foods, and spoon for the broth, expect a healthy amount of splatter and slurp, which is generally regarded as a sign of respect for the cook. A good version of either soup has the power to take the sting out of any cold winter’s night, and with a few of those both upon and ahead of us, might we suggest you get to slurping, ASAP?