It's a little late, but we were in Paris over the week of Thanksgiving and I wanted to share a few of our experiences in case they helped someone else.

We were three people, 2 adults and a 9 year old who is a pretty good eater as long as there is a fish on the menu. On the whole, I definitely felt that having a child at dinner was a lot less common in Paris than it was on our last trip, which was to Rome. Rome definitely welcomes kids in all restaurants with enthusiasm. And while we were certainly never made to feel unwelcome because we had a kid with us, I simply didn't see any other children at dinner, like ever. We never requested a special meal for her and, except for a couple places where we were explicitly offered a kids' menu, she ordered off the regular menu. The only problem with this is she simply doesn’t eat as much as adult so she often had food left over.

Here's where we ate, with comments
Lunch
Papilles (easing ourselves in on the first day with some very familiar brunch options)
58 Tour Eiffel (exactly what you would expect. I wouldn't really say the views were worth it for the costly sub par food. They did offer a kids' menu of noodles, noodles, noodles, but allowed us to substitute an adult course instead.)
Le Train Bleu (So amazing. The food was delicious and the atmosphere was exactly what my daughter was hoping for on her first trip to Paris. The service was spot on and they did offer a kids' menu which was simply a half portion of any adult plat which worked perfect)
Au Relais d’Artémis (on a day trip to the Loire Valley)
Le Grand Café Capucines (a trip down memory lane for my husband and I. The food was great, but oh my lord, such inflated prices compared to when we ate here almost 20 years ago)
Breizh Café (Great food, if the service was a bit brusque)

Dinner
Bouillon Pigalle (Cheap and crowded)
Le Bon Bock (A mistake but close to the apartment.)
Salento (Nice cozy Italian near our apartment. Nothing fancy, but satisfying)
Buoa Thai (We were suffering a bit from palate exhaustion :) This fit the bill. Even though I requested spicy, nothing was spicy. Maybe I didn't look like I could handle it?)
L'Oiseau Blanc (Our Thanksgiving meal. Amazing. $$$$$. Kids' menu. )
J'Go (Solid food. A very French kid's menu: the starters were either paté or foie gras. The only place where we experienced a bit of a language barrier. The main problem is that we went there for the roasted chicken and they had none that evening. That and leaving through the insanely crowded bar after dinner is not an experience for those with claustrophobia)

A few more words about L'Oiseau Blanc. As we were there in November, they were offering a special game menu and I got to try Lievre a la Royale. It was nothing like I expected, and I am glad I got to try it. The service was impeccable and they treated my daughter so kindly. We were gifted the best table in the corner looking directly at the Eiffel Tower (see photo). Of course the cost was commensurate with the experience, but that was expected. We had decided to not try to fit in a Michelin star on this trip, but I don't feel like we missed anything by choosing L'Oiseau Blanc.

One other note…..Big fans of macarons, we did our own taste test of Laduree, Fauchon, Pierre Herme, George Maricol, and Gerard Mulot. I have to say that for us, the unanimous winner was Laduree. None were bad of course. 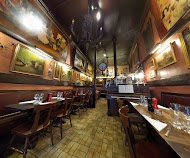 by David Watsky | Over the weekend, angst, anger, and unrest over the police killing of George Floyd reached a fever...

by Amy Schulman | Over the past week, the country has erupted in protest over the unjust murders of George Floyd, Breonna...

How to Fight for Food Justice in America

by David Watsky | What is food justice? We tackle the broad concept of food justice as well as some of the causes of...

Take Pride in Your Cooking: The Best Cookbooks by LGBTQ+ Chefs

by Simone Paget | There’s nothing quite like the feeling of cracking open a new cookbook and being immediately inspired...

What’s a “Pantry Staple”?: True Stories from the Cluelessly Quarantined

These Grilling Gadgets & Innovations Will Bring Your BBQ Into the Future