SRV, in the stye of a Ventian bacaro, in the South End.

Parsnip, in the old UpStairs on the Square space, doing something that looks New American/French-ish. 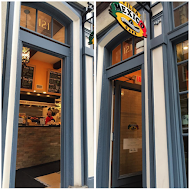