Get some plant-based cooking inspiration, and entertainment while you're at it.

Vegans on YouTube tend to be passionate and march to the beat of their own drum. That’s certainly the case for the best YouTube cooking shows for vegans. These creators and hosts conceived their shows mostly as their passion projects. Some have turned their channels into full-time careers, but all strive to offer vegans delicious food of all kinds. Whether you prefer to get your recipes along with a heavy dose of entertainment or just want to keep it simple, there is a vegan cooking show out there for you—whether you yourself follow a plant-based diet or not.

If you haven’t heard of Esther the Wonder Pig, you probably will soon. Esther is an internet personality like no other. As her moniker suggests, she is a pig with a personality as big as the hearts of the dads who take care of her. She was once adopted as a mini pig, but she kept growing, inspiring her dads to ultimately leave the big city life behind to start an animal sanctuary for her and other rescued animals.

“What’s Cooking in Esther’s Kitchen” is a YouTube series hosted by Steve Jenkins and Derek Walter, the dads of Esther the Wonder Pig, who also post each day to Facebook and other social media accounts in Esther’s voice. They also happen to be critically acclaimed authors of a book about Esther called (you guessed it), “Esther The Wonder Pig.” This cooking channel is casual and includes down-to-earth advice from Derek and Steve. Recipes from the channel include vegan cheese balls and faux fried chicken. In the “Tacos and Tequila” episode, learn how to make fresh lime margaritas and chili tacos with homemade mozzarella.

Esther the Wonder Pig: Changing the World One Heart at a Time, $12.22 on Amazon

See what happens when a micro piglet they adopted turned out to be a full-sized 600-pound sow!

Brown Vegan is a YouTube channel that aims to show people a practical approach to the vegan lifestyle. She offers fun recipes you won’t find elsewhere like veganized Popeye’s biscuits. In addition to straight recipe videos for such delicious fare as fire-roasted chickpeas with rice, find helpful videos such as “How to Camp as a Vegan” and “Tips for Eating Out as a Vegan.”

Monique Koch is the charismatic creator, director, producer, and star of “Brown Vegan.” She also has a website and podcast by the same name. Monique preaches progress over perfection, and her down-to-earth approach enhances the fun of trying her recipes and enjoying her videos for repeated viewings.

“The Vegan Zombie” gets major points for creativity and using fun storytelling to get the message out about veganism. This YouTube cooking show is set in a zombie apocalypse, and it includes recipes for everything from apple sage sausage with fried potatoes to pizza rolls.

Chris Cooney is the man behind the zombie façade. He creates, produces, edits, directs, and stars in the show. According to The Vegan Zombie website, Indy the German Shepherd is his sidekick. In addition to hosting the YouTube show, working on an upcoming film, and being active on social media, Chris wrote a cookbook called “The Vegan Zombie: Cook & Survive.”

“Mary’s Test Kitchen” is a fun vegan cooking channel on YouTube where you can find recipes for such indulgent treats as vegan Boston cream doughnuts. (Yes, they are as amazing as they sound.) She also has recipes for healthier fare such as roasted red peppers.

Mary Lin is the talented creator of “Mary’s Test Kitchen.” She is a Chinese Canadian who grew up in Vancouver, and she says the food she loved growing up influences many of her recipes. In her Instagram bio for @MarysTestKitchen, Mary requests “fun food only” please. That mantra seems to inform all the recipes on her YouTube channel. With many subscribers and followers across multiple social media channels, Mary’s message is being heard loud and clear, and it’s much appreciated.

“The Vegan Black Metal Chef” is a vegan cooking show that stands out for reasons that go far beyond the theatrics of the host’s costumes and theme. Unlike several vegan cooking shows that can be heavy on the host’s chatter, “The Vegan Black Metal Chef” doesn’t contain talking. Instead, the host uses original heavy metal music and song lyrics to teach viewers how to make each recipe.

Brian Manowitz is The Vegan Black Metal Chef. He’s the creative force behind all the channel’s music and videos. He uses irreverent humor to get his point across. In an interview for ABC News, Manowitz advises, “Just bring consciousness to your actions.” He has a cookbook called “The Seitanic Spellbook.” 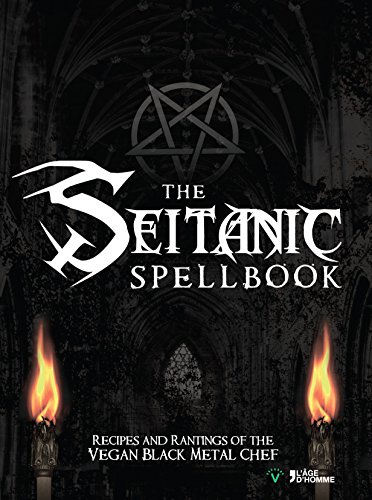 The Seitanic Spellbook, $9.99 on Amazon

Recipes And Rantings Of The Vegan Black Metal Chef.

“Veggie Rose” is a YouTube channel that’s all about breaking vegan stereotypes and showcasing recipes than even omnivores can appreciate and enjoy. She offers sweet recipes such as a vegan funnel cake and vegan whipped cream. She also savory recipes for food like vegan steak and vegan hamburger helper.

Rose Alvarez is the personable, talented host and creator of the Veggie Rose channel. She thought the existing vegan options were often bland, and she set out to change that with her own original recipes. Rose has e-books for sale on her Veggie Rose website. They include “Home for Christmas,” a vegan holiday cookbook, and “Meat Me Halfway,” which offers recipes for vegan meat substitutes.

Related Reading: The Best Vegan Cheese You Can Buy

“Honey LaBronx, the Vegan Drag Queen Cooking Show” is a fun, entertaining YouTube cooking show that you won’t soon forget. Recipes that you can find on the channel include corn dogs, pecan pralines, and dill hummus. You can also other fascinating videos on the channel like Honey’s pro-intersectional veganism speech from the Berlin Veganes Sommerfest 2018.

Honey LaBronx creates all the content for the channel and is the charming, naturally funny host. Honey also hosts the podcast “Big Fat Vegan Radio.” She is an LGBTQ rights activist who promotes messages of intersectionality, animal rights, and social justice in her channel.

“Sweet Potato Soul” is a channel that showcases unique and tasty vegan fare. It provides convenient options like five-minute vegan breakfast recipes. The channel also has recipes for vegan soul food such as vegan chicken and waffles and BBQ oyster mushroom sliders.

Jenné Claiborne is the creator and host of “Sweet Potato Soul.” As the name of her YouTube show suggests, she has an insatiable love of sweet potatoes. Her recipes have been published in “The New York Times” and “InStyle.” They have also been featured on “The Today Show.” She has a cookbook out that’s aptly titled “Sweet Potato Soul.”

Easy Vegan Recipes for the Southern Flavors of Smoke, Sugar, Spice, and Soul

People for the Ethical Treatment of Animals is better known simply as PETA. When I was growing up as an animal rights activist in a town in Alabama where hunting is very popular, PETA was the first animal rights group I heard of, and PETA is the biggest animal rights group in the world. The organization branched out in many directions, and they now have a YouTube vegan cooking channel.

Check out our favorite Hulu and Netflix food/cooking shows too! And if you like to listen up, see our list of the best food podcasts.

Related Video: A Visit with the Queen of Vegan Cheese, Miyoko Schinner