What Is the Difference Between French Press and Pour-Over Coffee?

How can something with only two ingredients (coffee beans and water) have so many endless variations and possibilities? On the one hand, it’s fun to figure out the myriad differences between this and that type of coffee or this or that type of brew method, but on the other hand, it can frankly be a little maddening to weed through all the geekery in order to make just the right cup. (And good grief, there’s a lot of coffee-geekery out there, huh?)

If you’re wondering whether a French press or a pour-over brew method is the one for you, you might just want someone to come along and tell you the differences between them. Of course, it’s only a poor carpenter who blames the tool for shoddy work, and no matter which brewer you chose, you’ll want to make sure you get the best ingredients (water, coffee) and try, try again until you succeed in making a cup that hits the spot for you. It’s not always easy the first few times, but trust us, it’s always worth it.

While French press pots come in various sizes, colors, and materials, a press pot is a press pot is a press pot, for the most part. They almost always have a glass, stainless-steel, or plastic brew carafe, and a plunger top that’s got a moveable mesh screen to push the grounds down to the bottom of the pot and hold them back for serving. The design is so simple and straightforward that anybody could figure out how to use one—in fact, the only real instruction for brewing the coffee is in the name: Press it down! One negative, however, is that the coffee won’t hold well in the press pot, both because it will cool down quickly and because it will start to get bitter if it’s left sitting too long. 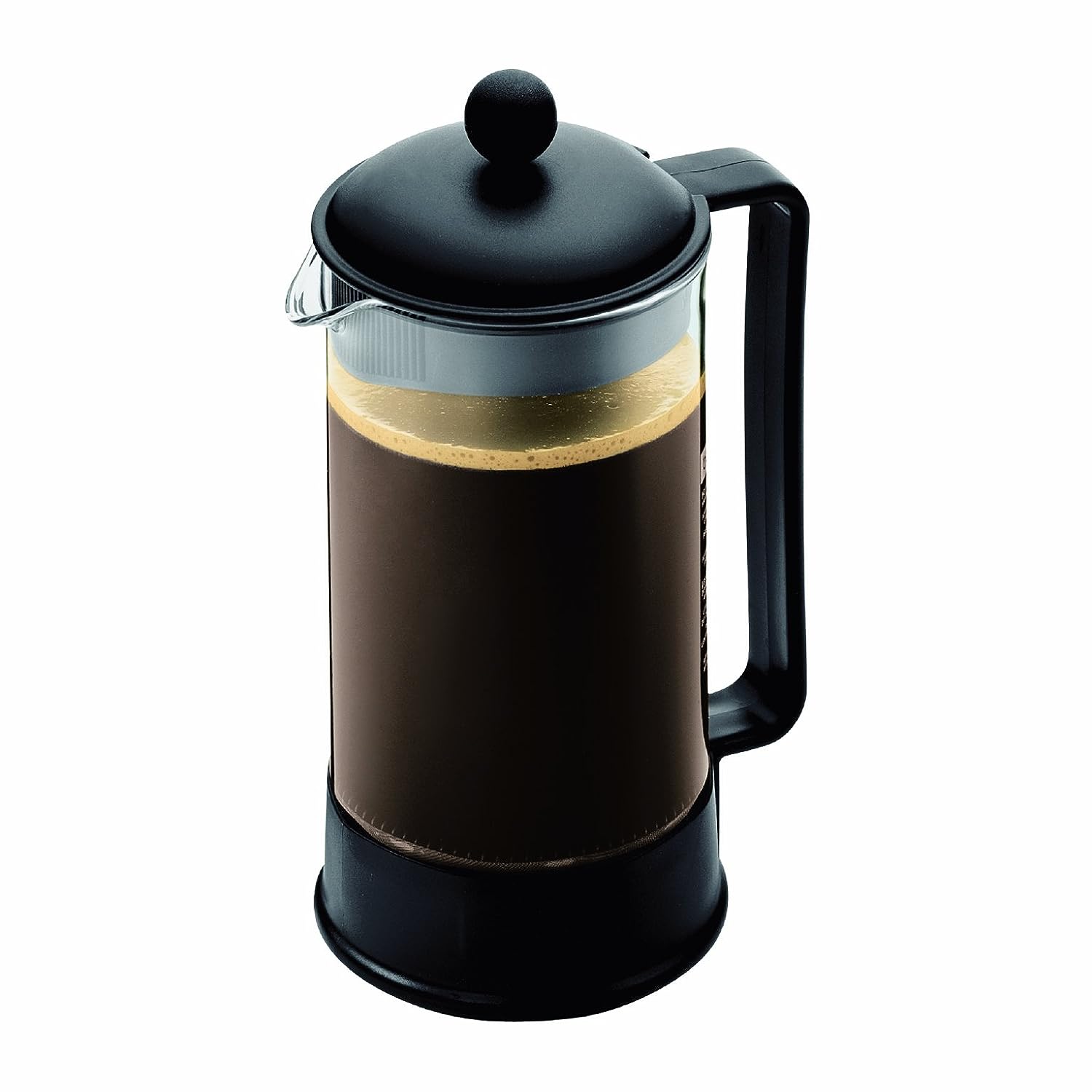 This classic French press makes up to eight cups at once.

Pour-over devices, on the other hand, come in a kind of staggering array of variations, each one just slightly different from the others—so slightly, in fact, that it can be something of a rabbit hole to compare them. Some pour-over brewers are flat- or smooth-sided, like a Chemex, while others have ridges or ribs on the inside that are designed to prevent the filter from sitting totally flush against the brewer walls. Some pour-overs come to a cone-shape at the bottom; others are flat. Some have one big hole, some have one little hole, some have multiple holes—each one serves a purpose, usually related to speed of brewing (big hole = faster brew) or extraction rate (smaller, fewer holes = more potential for extraction). Sure you can get in deep with what type you prefer, or you can buy the one you like the most and just live your life, since, honestly, the only real instruction for brewing the coffee is also in the name: Pour the water over your coffee! 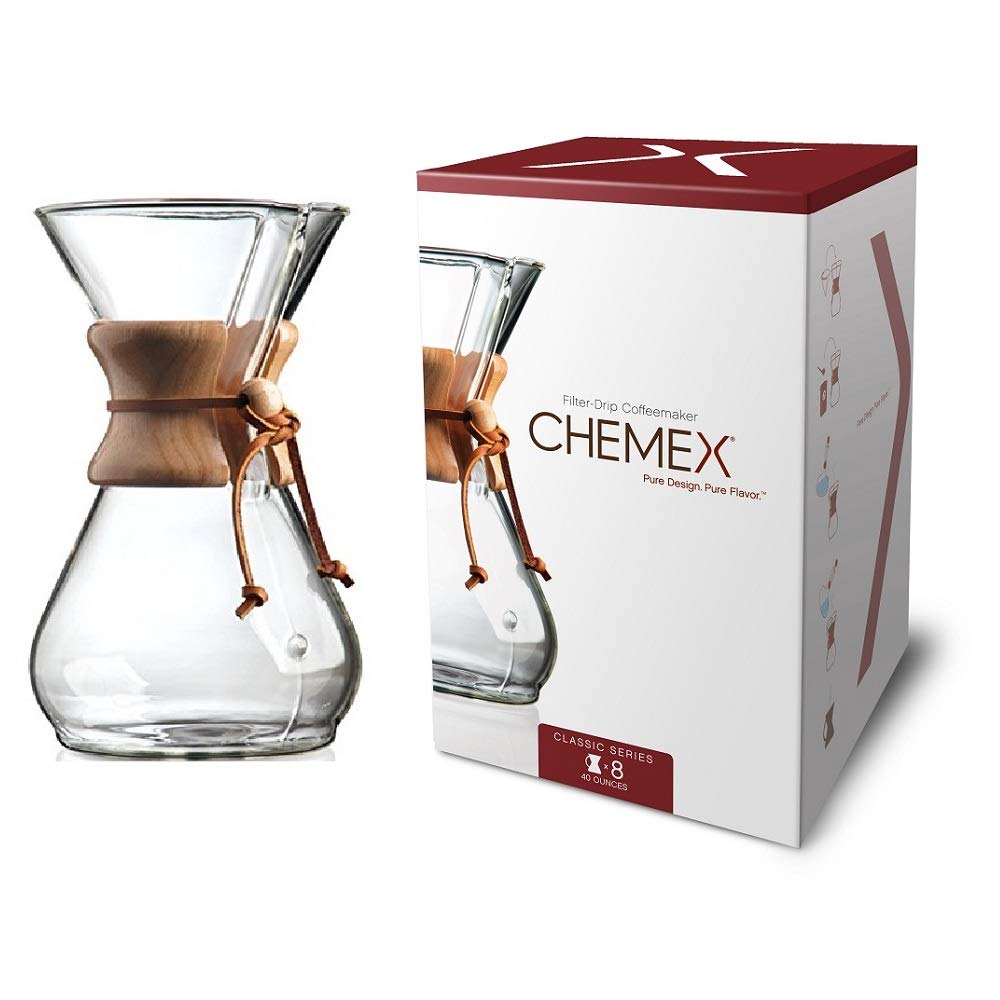 Don't forget to add the paper filters that go along with this one. 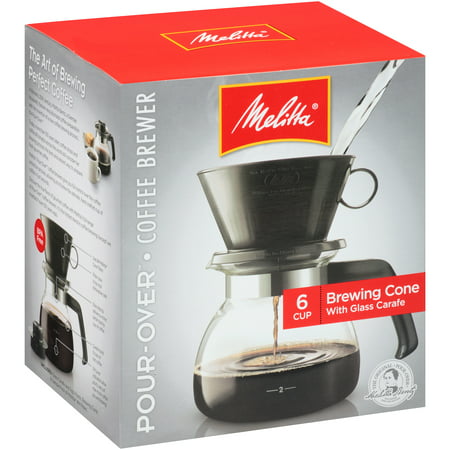 This makes six cups of coffee, so take note if you drink a LOT at once.

With the exception of espresso, which can be made in 30 seconds or less, most other forms of coffee brewing all take about the same amount of time, generally between 3–5 minutes. Both French press and pour-over coffee are no exception, but the main distinction between them, time-wise, is how much of the brew itself is active or passive.

With a French press, the set-up is everything: Coffee beans are ground relatively coarse (a little chunkier than coarse sea salt) and dumped into the bottom of the press, with just-off-boil water added to them to the desired amount and a roughly four-minute timer set. Once the coffee and water are mingling together, all you have to do is wait and depress the plunger to stop the brewing process. It’s hard for many people to believe that pour-over brewing takes just about as much overall time—3–5 minutes—because the fact that it’s mostly active time can make it seem longer, starting with a “bloom,” or an initial saturation of the grounds with water, and followed by regular pulses of water throughout the brewing process. Time being relative, it naturally depends on how you prefer to approach the passing of time: standing still or in constant motion.

If French press sounds like it has the advantage so far, this might be the category that turns the tables. While a pour-over brewer has an easy-to-clean filter situation (literally just remove the filter, complete with grounds, and toss or compost it), a French press pot will be full of loose grounds that need to be either scraped out, strained out, or otherwise magically removed from the bottom. Simply rinsing them out doesn’t always work, since the grounds are coarse and they can very easily clog a drain or make a mess in the sink, and yet they’re usually wet enough that they will sop all over a trash bag or can. A nearby compost bin is a good solution, but if you’re not the food scrap-saving type, this can become a pain pretty quickly.

The Easiest WayEverything You Need to Know About Instant CoffeeOkay, look, neither of these brewing methods are as convenient as, say, a single-serve machine or an order in to your favorite café, but neither one of them is particularly taxing in the investment or commitment department: They’re both pretty quick, they’re both easy once you get the hang of them, and you can stand around in your underwear (or, heck, your birthday suit) waiting for the last few seconds on the timer.

Some folks will argue that brewing a pour-over is more complicated, while others will say that a French press is a pain to clean up. You and I now know, however, that the ultimate deciding factor will come down to just one thing…

The true difference between these two brewers is in the cup, which of course is the one place it really matters.

French press coffee, because of its long full-immersion brew and lack of a paper or cloth filter, will almost always have a heavier body, what some describe as being “rich” or creamy. Some coffee lovers find that thick mouthfeel to be distracting from the rest of what the coffee has to offer, and the brewing process can also create somewhat muddled flavors that erase some of the nuance of more delicate coffees, but for a big, bold, long-sipping brew, French press is the ideal.

On the flip side, the filters that most pour-over brewers call for are great at holding back sediment and even coffee oils, which means the resulting drink is usually noticeably lighter or silkier on the tongue—think of it more like a sheet than a blanket. The clarity these brewers can create also means that a coffee’s profile is able to shine—fruity flavors taste fruitier, sweet coffees taste sweeter—but they can also get lost in the mix if you’re prone to adding sugar or milk.

Now you have to ask yourself: Who takes the final point in the great brewing match of press pot versus pour-over? Tell us in the comments!

Clearly, none of this matters unless you start with great beans, so check out our guide to The Best Coffee Subscriptions to keep yourself supplied with the good stuff. And when you’re on the go, see How to Make Great Coffee While Traveling.

Related Video: French Press vs AeroPress—What Is the Difference?

Erin Meister (you can just call her "Meister") is both a longtime journalist and a coffee professional with nearly two decades' experience. She has written about food, coffee, film, travel, music, culture, and celebrity for The Boston Globe, The Washington Post, Rachael Ray Every Day, Saveur.com, Time Out NY, Chickpea Magazine, Food & Wine's FWx.com, BUST magazine, Barista Magazine, and more. She is the author of the brand-new book "New York City Coffee: A Caffeinated History (The History Press, 2017)".
See more articles
Load Comments