What Is the Difference Between Mexican and Filipino Adobo?

“Adobo” can refer to a seasoning, a sauce, or a whole dish—and then, what is the difference between Mexican and Filipino adobo? This will help you keep your adobos straight (and make your life so much more delicious).

As an American with Afro-Caribbean heritage, Goya adobo seasoning has always held a permanent piece of real estate in my family’s kitchen. Though my family isn’t from the Spanish speaking Caribbean, my uncle married a Cuban woman, so we have had a lot of holiday gatherings where we enjoy a mix of Spanish and English Caribbean Food (eg. arroz con pollo, flan, curry chicken, fried plantains, baked ham, macaroni pie, moros y cristianos, tostones, etc). 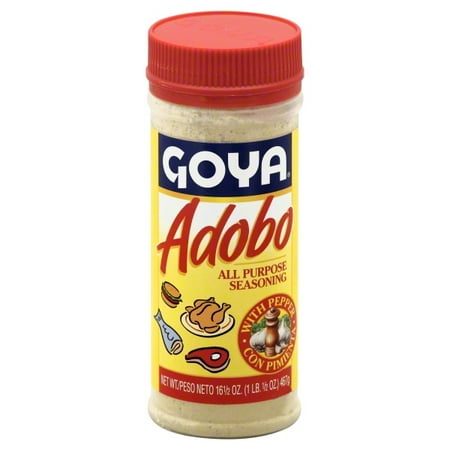 From cooking together, we discovered, despite the linguistic barriers and cultural differences, both cultures use adobo with meat and rice regardless of what we call the dishes themselves. It is always funny when we realize our cultures overlap more than we differ.  Now that I am grown and have become a trusted family cook, I have even dabbled in a Mexican style chicken adobo with chilies and tomatoes from time to time. So, it should come as no surprise that I have always considered myself well versed in adobo. I just love the savory, garlic taste with a bit of turmeric and oregano and, sometimes, cumin.

Then, I tried Filipino adobo. It was sweet, tangy, and garlic-infused with fresh scallions (aka heaven), but different than what I was used to. How could the two things have such similar names, a vinegary taste, and yet not be the same dish? Is it just variation on a theme?  Or, are these cultures just unaware that they do the same thing? The answer is actually a fun history lesson and not what you might expect. So, here is everything you need to know about the difference between Mexican and Filipino Adobo.

Spanish Adobo refers to both the rub seasoning and/or the marinade that people use to preserve and flavor the meat. At its simplest, the word “adobo” simply comes from the verb “adovar,” which means “to marinate.” So, originally this word was used to describe a pickling sauce that was made of olives, vinegar, and spices in Spain. Thus, the word “adobo” was used to refer to the preservation of meat through pickling and marinating sauces and rubs. Typically the seasoning or marinade will include paprika, oregano, salt, garlic, and vinegar.

In Mexico, they use crushed chilies, spices, and vinegar to make a marinade and sauce that is red, thick, and spicy. As a marinade, it often goes on meats that are then grilled, but as a sauce, it can be used to simmer meat and other sides (see our Adobo-Marinated Chicken Tacos recipe, and our similarly named Adobo Chicken Tacos recipe that uses the sauce to coat shortcut rotisserie chicken). The base of Mexican adobo uses the traditional Spanish spices but adds indigenous ingredients to the mix: tomatoes and chilies. Thus, Mexican adobo is a fusion of indigenous and colonial influences.

Filipino Adobo refers to a whole dish. In fact, it is basically the national dish of the Philippines. The dish includes meat, seafood, or vegetables marinated in vinegar, soy sauce, and garlic. The food is then browned in oil and simmered in the marinade.

Looking at it from an aerial view like this, it is easy to see some similarities: vinegar, garlic, and marinating meat. From there, each culture uses spices that make sense based on their locations and flavor profiles. So, who did it first?  In Mexico, it was a fusion. For the Philippines, unfortunately, like history, the credit goes to the conquerors when it is not always the case.

The Philippines consists of over 7,000 hot islands—literally.  The tropical maritime climate averages 79 degrees each year. So, without refrigeration, food quickly goes bad unless you can preserve it. Filipino Adobo, simplified is soy sauce, vinegar, and spices. The acid in the vinegar and high salt content of soy sauce deters the growth of bacteria in meat.

So, when the Spanish arrived and colonized the Philippines, they saw what the Filipino people did to their meat and probably said something like, “Oh! Adobo!” And, there you have it. Filipino Adobo is an indigenous dish that received a Spanish name because it reminded the Spaniards of how they marinated and preserved meat with spices. They are not the same, but they are similar because each culture needed to preserve and flavor food so it wouldn’t rot.

Nowadays, the world has fridges. So, regardless of who thought it up first, we all cook adobo because, well, we just love it.

Related Reading: What Is the Difference Between Mole and Adobo?

What Is the Difference Between Mexican and Spanish Chorizo?