May Cookbook of the Month: Dinner in French by Melissa Clark Discuss
+

Looks like there is not much action on this board, so I thought I would post about our trip. We were in town for a conference and a bunch of the meals were at the conference itself, but we had some time to venture out:

For German food, we went to Mader's for lunch. I had read that the decor is a bit over-the-top in German kitsch, but we really didn't mind. Our server was very friendly. The pretzel bread they brought to the table was warm and delicious. Liver dumpling soup had a good broth and the dumpling was great. For mains, the sauerbraten (beef) was fine, served with red cabbage and spaetzle. But the real treat was the slow-cooked pork knuckle, which was tender and very flavourful. The apple strudle was fine and the black forest cake was very good.

For another lunch we went to the Milwaukee Public Market. We ate mainly at West Allis Cheese. The fried curds were excellent, with a crispy coating and not at all greasy. The grilled cheese was also excellent, with a generous slab of cheese. And the Usinger's bratwurst on a pretzel bun was fine, although I am not clear it was noticeably better than other bratwurst we have had.

One work dinner was at Rumpus Room (not our pick). The beer and cheddar soup was very good. The wedge salad and steak were fine, but unremarkable.

We went for the fish fry at Lakefront Brewery. We also went for the brewery tour and tried about 8 beers in total. I liked their IPA, their Mexican ale, and their Grist ginger particular. Their root beer was also nice. We had the smelt and the perch. The smelt were awesome, nicely fried and ungreasy. The perch did not seem like any perch we have eaten - big pieces and large flakes. We are suspicious it was something else. The fried curds there were also excellent and the pretzels with a cheese and mustard spread were also gobbled up.

We did one nice dinner at Ardent. It was lovely, with a dish of various tomato presentations being the taste highlight. The wine pairings were all excellent, although we were a little disappointed to not get a Wisconsin wine at least once (we tried a riesling on another night and it was pretty decent). The vichyssoise was also delicious. Their own beef was the main animal protein featured (as tartare and then as a cooked steak) and it was very flavourful.

We tried 3 frozen custards - Gilles, Kopp's, and Leon's - and our preferences were in that order. The peanut butter with chocolate bits at Gilles was our favourite. We also tried 8 flavours at The Purple Door. The local whiskey flavour was the best, but coffee Heath bar was underwhelming as were some of the fruit flavours.

At miscellaneous points we had various old fashioneds, variations on Moscow mules, and Spotted Cows from New Glarus, all of which went down nicely.

We did scoot out to Madison briefly and loved Paul's Pel'meni - both the meal and potato versions. The somewhat unexpected additions of curry and other Asian condiments worked quite well. We also bought a pecan Kringle at Larsen's in Racine, which was fine (and gigantic) but we are not clear about the fuss.

Well that was the best we could do in a few days, so hope it sparks some discussion or at least provides an update to the next visitors. 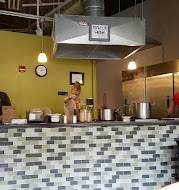 You'll Have Zero Beef with These Delicious Veggie Burgers

by Caitlin M. O'Shaughnessy | Interest in veggie burgers has been rising for a while now (along with the general surge in plant...

by Dan Koday | Guac seems simple, but there are many ways it can go wrong—hence, these tips on how to make the best...

Upgrade Your Taco Tuesday with These Fresh Fruit Salsas

by Jen Wheeler | Looking for a way to liven up your Taco Tuesday—or any summer dinner? Want something more than a sauce...

by Amy Schulman | Esteban Castillo was raised in Santa Ana, California, surrounded by palm trees and a population that...

JUNE 2021 Cookbook of the Month - NOMINATIONS

What else can I add to a curried chickpea stew for texture?