City of Gold (movie) and Boston restaurants that fit the mold

I will start off by recommending the movie City of Gold which is about the LA Times reviewer Jonathan Gold. We saw it at Kenmore. I have been a Gold fan forever (he won the Pulitzer almost a decade ago and used to write for Gourmet). He loves to find interesting ethnic restaurants in LA. One thing he has noted is that the neighborhoods in LA are very insular so the restaurants are cooking for people from their neighborhoods who grew up in the exact same place as they did as opposed to cooking food that is sort of like what they grew up with but that the general population will want. His thought is that it makes for some very interesting food but is perhaps not great for the communities. Exploring the neighborhoods through the food is a way to see the city in a whole different light. I found it interesting. Just curious if you think there are any intact neighborhoods and restaurants in the greater Boston area that fit the LA mold that the movie depicts. 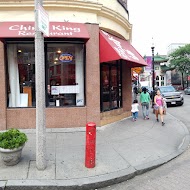 Updated 1 hour ago 21 comments
Side Dish
5