Yes, that includes Oreos and beer.

Winter is coming (on April 14th) and so are the snacks. If we’ve learned anything over the past seven seasons of “Game of Thrones” (besides the fact that we may never emotionally recover from the untimely death of Khal Drogo), it’s that, like the fictional residents of Westeros, fans of the series are serious about their food and drink.

GOT GrubHow to Make the Food You See in 'Game of Thrones'Though the premiere of the final season isn’t set to air for a beat, die-hard fans can visit a “Game of Thrones” Pop-Up Bar at Replay Lincoln Park in Chicago or book a few nights at The Cuon, a family run guest house in Strangford, Ireland, where the cast stayed while filming the first two seasons. The quaint bed and breakfast offers a “Game of Thrones” Banquet (Stark cloaks and swords included) and a “Ned’s Picnic,” a recreation of the iconic picnic Ned Stark and King Robert Baratheon enjoyed at nearby Winterfell Castle, complete with crusty bread, cold meats, and Hodor beer.

But if a transatlantic flight isn’t in the cards (and you’re not up for trying your hand at some homemade Mutton in Onion-Ale Broth), you can still add the following product tie-ins to your Game of Thrones party menu. And see how to stream “Game of Thrones” if you don’t have HBO.

The most epic cookies of all time are here. #GameOfCookies #ForTheThrone

If you prefer baked goods straight from a bag, “Game of Thrones” Oreos are finally here. Oreo revealed the collaboration in February via a cryptic Instagram video with the caption, “cookies are coming.” Fans had their own theories about what this “fire and icing” partnership might entail (“Could it be?! Jon Snow on an Oreo?” writes Instagram user sarah_m585), but based on Oreo’s recent collaboration with Mickey Mouse, we expected more of the classic black and white cookie—perhaps with a whimsical novelty filling. We’d still love to see lemon cake Oreos in honor of Sansa’s favorite dessert. We were half right, anyway—check out the newest (impressive!) video above. While these are currently unavailable on Amazon, you can check for them in local stores, including Target and Walmart. 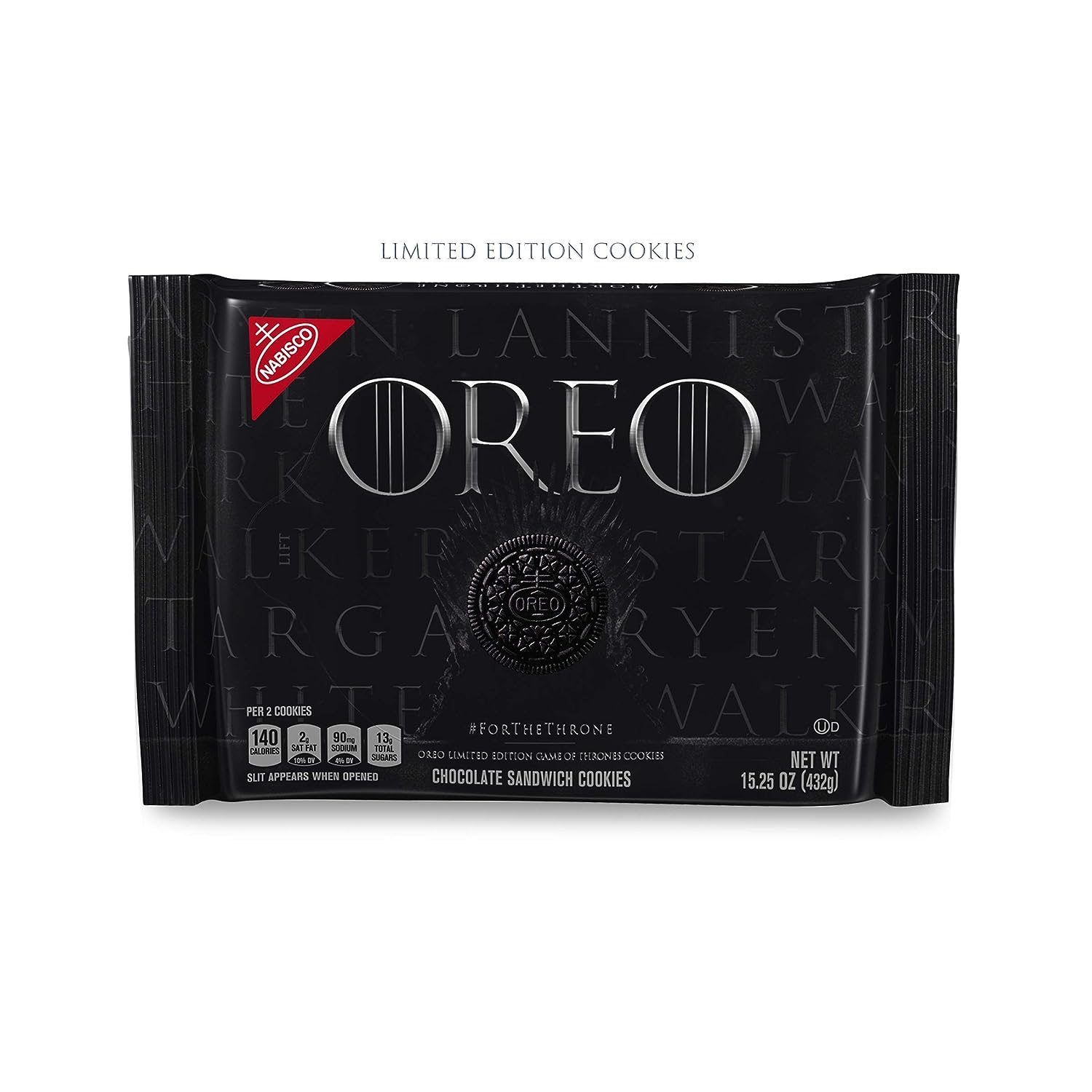 Check to see if they're back in stock, or go search your local stores.

Sometimes winning it all means sacrificing everything. A can must become no one. So we did. Now it’s your turn. Want a chance to claim your limited edition @GameofThrones Mtn Dew? 18+, Ends 3/29/19. Rules {https://bit.ly/2CJwg4A} Swipe up on our IG Story for your chance to win. Watch the Final Season April 14 on @HBO. #ACanHasNoName #ForTheThrone #MTNDEWsweepstakes

Mountain Dew has decidedly won the “Game of Thrones” packaging arms race in the food category with its all-white, “A Can Has No Name” version. Put this baby in the fridge and as soon as it gets cold you’ll see Arya’s kill list with the names of her more unfortunate targets already crossed out. Your local grocery store won’t carry this limited edition, but Mountain Dew wants you to use a few hashtags to win a can, tweeting: “Tell us what you’d sacrifice using #ACanHasNoName #ForTheThrone #MTNDEWsweepstakes for your chance to claim your limited edition @GameofThrones  Mtn Dew can.”

For The Throne, our latest @gameofthrones-inspired beer, launches this Friday at the brewery mercantile in Cooperstown, NY, and nationwide in early April. This strong golden ale is co-fermented with pinot grigio and viognier grape juices and bottle conditioned with Champagne yeast. A tribute to those who aspire to be the final occupant of the Iron Throne, this is truly an ale fit for royalty. Read more about For The Throne on our website (link in bio.) #ForTheThrone

Tyrion Lannister may have famously said “it’s not easy being drunk all the time,” but imbibing just got a whole lot easier with Ommegang’s latest “Game of Thrones” beer. Since 2013, the upstate New York brewery has rolled out 14 Westeros inspired brews, including a “Royal Reserve Collection” which they released in 2018. The line features Hand of the Queen, a malt forward ABV barleywine with notes of soaked raisins, molasses and toffee; Queen of the Seven Kingdoms, a Belgian sour blonde ale brewed in honor Cersei Lannister; and Mother of Dragons, a smoked porter mixed with a Belgian Kriek (think: dark and smoky with hints of sour cherry). The latest edition is For the Throne. Clean and dry, this golden ale co-fermented with Pinot Grigio and Viognier grape juice would pair nicely with some homemade pork sausage. Check out these “Game of Thrones” goblets you can pour your beer into for an even more thematic experience.

For a limited time only, UK-based delivery service Deliveroo will be offering hand-painted chocolate dragon eggs that bear an uncanny scaly resemblance to the ones Daenerys Targaryen is given on the show. Made from fair trade white chocolate, the eggs are available in emerald green, copper red or muted brown. Weighing close to two pounds, these hefty eggs (which retail for about $1) provide a cost-effective sugar high for premiere night. Unfortunately, the eggs are only available for customers residing in London, Manchester, and Leeds. The rest of us will have to make our own dragon eggs, or find other ways to cope with the impending end of the series.

Choose your own colors and fillings.

British beverage company Diageo has teamed up with HBO to release a limited-edition collection of single malt Scotch whiskies designed to provide “an authentic taste of the Seven Kingdoms and beyond.” Like Westeros, Scotland’s distilleries are diverse and each “produce a distinctive whisky representative of its local terroir.” We think Jon Snow would approve of the Oban Little Bay: Game of Thrones The Night’s Watch, a scotch with subtle smoke and fruitcake aromas, notes of clove, chocolate and juicy orange. Spicy with a hint of sea-breeze, the light dry finish of this “proper northern drink” is the perfect companion for a savory steak and kidney pie.

If you’d like to drink like Tyrion Lannister, California-based brand Vintage Wine Estates have released four official “Game of Thrones” wines. There’s a Chardonnay designed to complement the delicacies of King’s Landing; a warm and spicy Red Blend with notes of leather and spice; a fruit forward Pinot Noir, and the piece de resistance: a silky and luxurious Napa Valley Cabernet Sauvignon, perfect for your next feast. Enjoy them alone or use to make your own mulled wine. Also see the wines Cersei Lannister would love.

Finally, a White Walker that won’t give you night terrors. In October, Johnnie Walker released White Walker, a limited edition whisky named after the enigmatic and feared characters of the same name. Paying homage to the “Frozen North,” this blended scotch whisky is made with single malts from Cardhu and Clynelishis—one of Scotland’s most Northern distilleries, and features hits of vanilla, red fruits and orchard fruits. Designed to be served directly from the freezer, the label is made with temperature-sensitive ink which reveals “Winter is Here” when the bottle is frozen. See some “Game of Thrones” cocktail recipes for ideas on how to use it besides just sipping it neat.

If you’re within striking distance of a Shake Shack, you can grab a Dragonglass shake and a Dracarys burger starting Friday, April 12—the only catch? Allegedly, you have to order in Valyrian. But they provide a handy cheat sheet to help you out. (And teach you how to order others to bend the knee while you’re at it.)