Oat milk has become such a serious craze that I’m surprised this kind of chocolate hasn’t arrived sooner. If you haven’t heard of oat milk, let me introduce you to one of my new favorite beverages. While some have called it basic, I love its toasty flavor and all of the calcium, iron, and other vitamins in it. Plus it’s vegan, nut-free, and has a much lower carbon footprint than other alternative milks (cough, almonds, you monster, cough).

More Vegan OptionsThe 9 Best YouTube Cooking Shows for VegansAll of that has led sustainably minded chocolate makers to start using it in their bars, which lends the chocolate the same toasty, roasty taste as the alternative milk itself. Vegans and those with dietary restrictions in particular will like this type of bar, as oat milk chocolate is completely vegan, nut-free, etc., just like its oat milk counterpart.

I have a theory that everyone secretly loves milk chocolate, even my Aunt Judy who says she’ll only eat high-percentage dark chocolate. For all of these folks, chocolate makers have already been turning out dark milk chocolate and coconut milk chocolate. Now it’s oat milk’s turn, and even if you’re not vegan, it’s fantastic.

Since 2017, Map Chocolate has turned out small batches of flavors like triple ginger oat milk white chocolate with dark chocolate chunks, salted caramel, and, for the adventurous, salted caramel with black garlic. “I love being able to offer a plant-based milk (and white) chocolate,” says owner Mackenzie Rivers, noting that she uses gluten-free oats from Bob’s Red Mill.

Meanwhile, Raaka Chocolate just released its limited batch of oat milk bars in January; it includes coconut in the mix too, for an uber creamy bar. And Ritual Chocolate premiered its seasonal chocolate eggnog bar just before the holidays: rum-soaked cocoa nibs, nutmeg, cinnamon, sugar, and oats are ground and refined into a smooth-as-Drake, plant-based chocolate. Roots Chocolate makes a “pop-up” bonbon called Oatie with oat milk and oat bran, based on “an unbaked oatmeal drop cookie my mom used to make,” says owner Lisa Nelson. Cru Chocolate plans to release an oat milk bar soon, as does Land Chocolate, in the U.K., and WKND Chocolate, in Spain, which first named its bar “WKND Ration,” based on the history of U.S. Army D Ration chocolate bars being mainly made with oat milk. 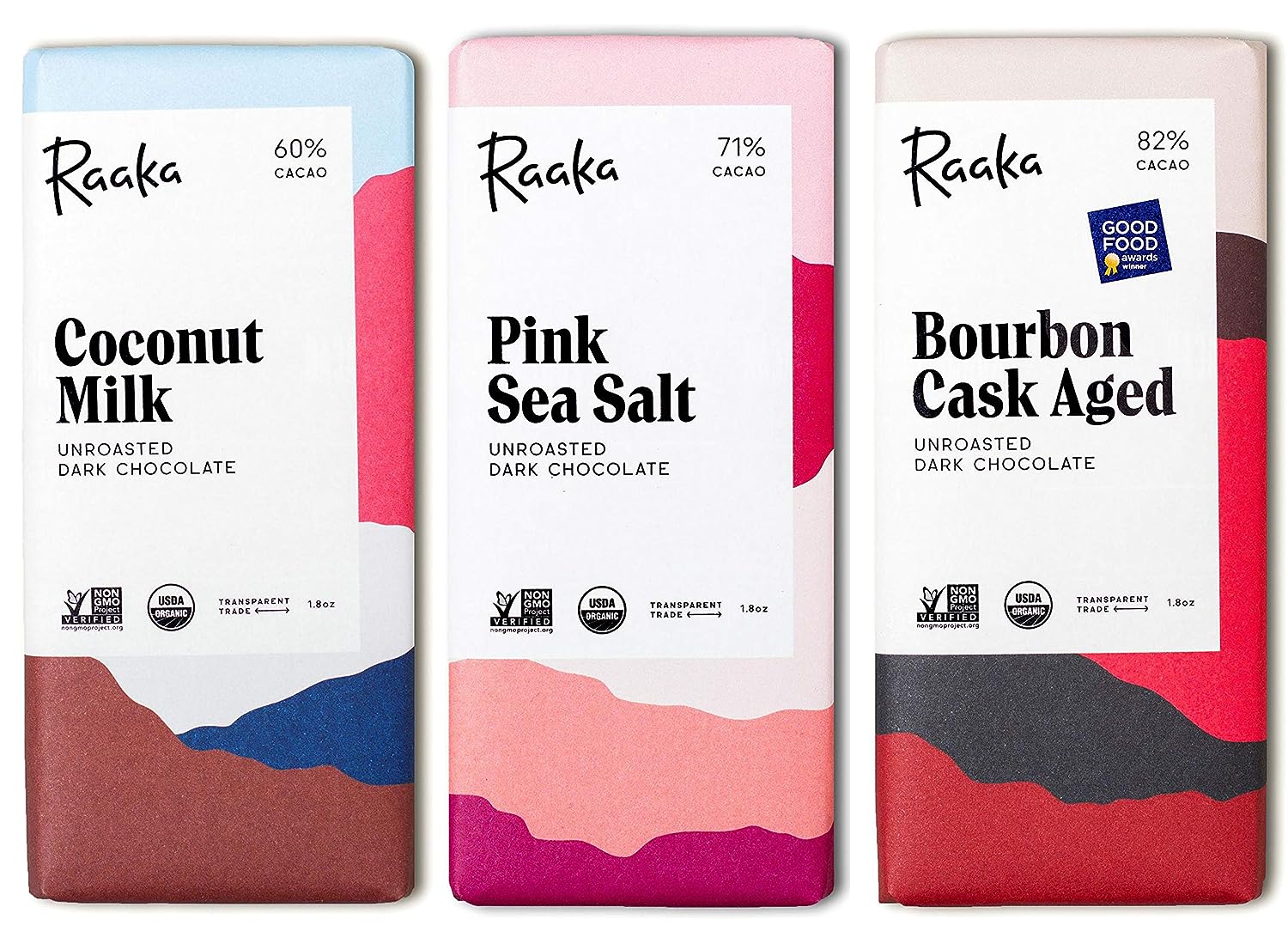 Though not made with oat milk, these dark chocolate bars are also vegan and gluten-free.

Now, keep in mind that none of this chocolate—whether it’s milk or mylk—is exactly “healthy.” In all cases, we’re talking about a lower percentage of cocoa, usually 60 percent tops. That means fewer antioxidants and flavanols from the cocoa beans themselves and more sugar (whether it’s cane sugar or natural sugars in milk). Plus, any “milk” chocolate will always have extra cocoa butter (read: fat) added to it, and if it includes coconut there will certainly be more fat as well. Please don’t shoot the messenger, because I am certainly at the top of the list of people who wishes chocolate (especially milk chocolate) were healthy. One point for oat milk chocolate, though: It should have less sugar than traditional milk chocolate, because it will not include the natural sugars in milk.

Introducing our Oat Milk bar, a dark chocolate that tastes like a homemade granola cookie. It could pass for breakfast, but also dessert. This is first of seven bars in a limited batch Cane Sugar Free collection we’re releasing this month. We’ve made it with Peruvian cacao, oats, pure maple sugar, toasted coconut, and a dash of vanilla bean. Grab one before it’s gone.

As someone who spends most waking hours thinking about chocolate, part of me takes issue with the idea that it’s even a milk chocolate at all, since the “milk” part is literally ground-up oats. As Karla McNeil-Rueda of Cru Chocolate says, “I think baristas are the ones leading the trend of calling it oat milk, but is actually a grain bar.” In fact, the first “oat milk” bar appeared years ago, from Patric Chocolate, and was simply called Oatmeal Cookie.

But it’s not like you’d make real milk chocolate by pouring milk into melted chocolate: As soon as chocolate encounters liquids like milk and water, it seizes, or clumps up. That’s why you have to use powdered milk to make the delicious treat. (Heads up, history nerds: Swiss chemist Henri Nestlé invented a way to make powdered milk in 1867 and a Swiss chocolate manufacturer added it to chocolate in 1879, changing history forever.)

So is the “milk” part of these bars legitimate or simply marketing? I’m too busy enjoying them to worry about it.

Related Reading: How to Make Oat Milk at Home

Megan Giller is a food writer and the author of "Bean-to-Bar Chocolate: America’s Craft Chocolate Revolution." Her work has been published in The New York Times, Slate, Zagat, and Food & Wine, and her blog Chocolate Noise was a 2016 Saveur Food Blog Awards finalist. She also hosts luxury chocolate-tasting events, teaches classes at the Institute of Culinary Education and other locales, and judges at chocolate competitions. Follow her on Instagram at @chocolatenoise.
See more articles
Load Comments