How to get to funky town.

If you want to learn how to make kimchi, there is no one end-all be-all kimchi recipe, but the process isn’t complicated. In fact, DIY kimchi is one of the more accessible at-home food projects out there: It doesn’t require much more than some basic ingredients, the lidded crock or container of your choosing, and time. Should be simple enough, right?

Well, with so many variables going on, right down to the molecular level, the line between a kimchi that’s brilliantly funky and fermented and one that’s just plain funky can be a thin one.

How to Make Kimchi

Kimchi-making novices need not fret, though. Although you could certainly boil kimchi fermentation down to a science, it’s better to think of it as a tradition, backed up by history and guided by a few intuitive principles that can easily be learned. For the finale of our first season of Chow-To, our senior video producer, Guillermo Riveros, visited Atoboy in NYC to get a lesson from chef de cuisine YeongSoo Lee:

When looking to make a new batch of kimchi, or troubleshooting one that’s gone awry, it helps to consider your ingredients and the processes that take them from crunchy and raw to tender and bubbly. Here are seven pointers that will have you on your way to perfectly fermented vegetables, each and every time.

Not Just Napa Cabbage7 Alternative Veggie Versions of KimchiOne nuance that gets lost in translation outside of Korean cuisine is that kimchi isn’t one kind of pickle, but many—there are hundreds of different types in Korea alone. Kimchi recipes vary by region, the local availability of ingredients, and especially the seasons. Napa cabbage kimchi, the most well known variety, is associated with the harvest in the fall. Spring, on the other hand, is about fresh greens, while summer is for warm-weather vegetables like cucumbers and radishes. At Atoboy, you can find kimchi made from eggplant, broccoli, snap peas, tomatillos, and even apples.

When shopping for your produce, remember that kimchi is not just a recipe, but a means of preserving ingredients while they’re at their best. Don’t hesitate to look beyond your basic cabbages and incorporate whatever peak seasonal produce fits your fancy.

2. Experiment with Ingredients and Flavors

Kimchi can be enhanced by a number of seasonings and add-ins, traditional and non-, each giving a distinct flavor to the final product. Love lots of deep, umami, flavor? Try adding salted shrimp, oysters, or mushrooms. Prefer something a bit lighter and cleaner? Leave the seafood out and do a kimchi that’s all vegan. The same goes for spice levels, too—you can feel free to adjust the amount of hot pepper to fit your heat tolerance. Kimchi is a food that’s meant to be personalized and customized, so don’t be afraid to go off recipe and tweak things to your liking.

At Atoboy, two types of fish sauce go into the mix to hit just the right balance of saltiness. Speaking of…

So much depends on salt when it comes to kimchi. A saline environment encourages the development of the lactic acid bacteria that drive fermentation processes, which give pickles their characteristic tang, while also eliminating harmful microorganisms. Not enough of it will increase the chances that your veggies will go to rot, while too much will kill off those lactobacilli (good bacteria), halt fermentation, and make the whole thing unbearably salty.

Many kimchi recipes call for a two-step brine: First, a short dry brine in which the vegetables are rubbed with salt to help break down, soften, and open them up. This makes them more amenable to soaking in flavors during the second stage, a long wet brine in a solution that’s roughly as salty as seawater. It’s important to thoroughly rinse the salt off after the dry brine, otherwise you’re likely to end up with a rather salty batch.

Coarse sea salt is called for in most traditional recipes. Keep in mind, however, that the density of salt per volume can vary depending on the size and shape of the crystals, so it still helps to use your tastebuds to determine the right amount. Kosher salt works just fine as well. Stay away from iodized table salt, however: not only is it much saltier by volume, the iodine can inhibit fermentation.

One of the most frequent mistakes that kimchi newbies make is leaving in lots of air-filled gaps and bubbles after they’ve put their pickles inside the fermenting vessel. This is a big no-no: Too much air will increase the risk of there being unwanted bacteria, produce off-flavors, and result in an unevenly seasoned and fermented kimchi. Make sure that you pack in and press down firmly on your vegetables, leaving as few spaces as possible—ideally, there should be brine covering the top—and seal your container tightly. 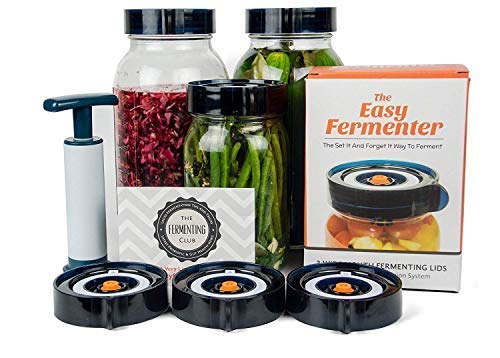 These lids are specially designed to prevent mold and ensure you don't have to burp your jar; they'll fit any standard wide-mouth jar, but those are not included.

5. Be Mindful of Where You Store Your Kimchi

Warmer temperatures will help jump start fermentation, so feel free to store your kimchi at room temperature during the first few days. Keep it away from sunlight, though, because this can spoil the contents inside. After it has started to gain a lactic tang, you can move it to a refrigerator to slow down the fermenting process and help it age gently, steadily, and gracefully.

Related Reading: What Is the Difference Between Fermenting and Pickling?

The span between when you pack your kimchi into the jar and when it’s ready to eat can be days or even weeks, during which time you’ll more than likely be tempted to open up the container to check on how things are going. You should try to keep the peeking and poking to a minimum, however: Introducing too much fresh air into the jar will oxidize things and increase the risk of off flavors. If you do steal a nibble, make sure to pack the top layer down again and ensure that it’s fully submerged in the brine.

Like a fine wine, the longer you let your kimchi sit and ferment, the more complex and interesting it will be. Think of it as the one thing that you want to get lost in the back of your refrigerator, only to discover it ages later when it has come into full maturity. When kept in a cool, dark environment with minimal exposure to air, it will last for months, even years.

If you absolutely can’t wait to enjoy some kimchi, check out geotjeori, a whole class of quick pickles that can be made in just a few hours, or even minutes. They carry the snap of their longer-fermented relatives, but with less funk and a fresher flavor.

Once you’ve got the basics down, you’ll have no problem acing any of these kimchi recipes:

This is your standard cabbage kimchi recipe, seasoned with pepper flakes and given a slightly funky edge from the addition of shrimp. You can eat it on its own or incorporate it into stews, fried rice, tacos, mac and cheese, potato salad—you name it. Get our Basic Napa Cabbage Kimchi recipe.

Made from fat, sturdy, Korean radishes, this kimchi has an addictive crunch to it, as well as a sinus-clearing dose of heat. Get the Kkakdugi (Cubed Radish Kimchi) recipe.

Brussels sprouts may not be traditional in Korean cuisine, but they’re a natural fit for being kimchi-ed nevertheless. Their snappy inner cores and frilly outer leaves become all sorts of tender and juicy when left to ferment in a strongly-seasoned brine. Get the Brussels Sprouts Kimchi recipe.

A kimchi without heat? That’s right: This pepper-free version swaps out the spicy stuff to focus on the sweet and salty. Get the White Kimchi recipe.

No time? No problem! Fresh kimchi can be made by allowing your veggies to sit and marinate for just a couple hours. This cucumber version stays crisp while still soaking in lots of garlicky and gingery flavor. Get the Quick Cucumber Kimchi recipe.

This post was originally written by Miki Kawasaki and was updated by Chowhound editors with new formatting, links, images, and text.

Miki Kawasaki is a New York City–based food writer and graduate of Boston University’s program in Gastronomy. Few things excite her more than a well-crafted sandwich or expertly spiced curry. If you ever run into her at a dinner party, make sure to hit her up for a few pieces of oddball culinary trivia.
See more articles
Load Comments