Biga on the Banks

Take me to my post
Restaurants & Bars
Texas San Antonio

I arrived at Biga around 7, left around 7:45. I like a speedy kitchen but that was a bit too fast. But the food was fantastic. I ordered from the "menu highlights." The first dish was the chicken fried oysters on squid ink linguine - texture of the oyster and linguine were both perfect. Next was the 11 spiced Hill Country venison and grilled quail. I think the venison was Nalgia. It was perfectly cooked but I didn't really like the gaminess of the Nalgia. On the other hand, I loved the quail - very tender and juicy.

The following day, I had 2 lunches - Granary for some cue and then pizza at Il Sogno. I walked around and didn't see La Gloria, thus missed a 3rd lunch. The pizza crust at Il Sogno tasted like saltines (too crispy and salty for my liking).

For dinner, I was going to go to Cured but I was tired of biking. I was visiting during the polar vortex and the entire day was cold and drizzling. So I canceled my reservation for Cured and went to Las Canarias.

At Las Canarias, I had some forgettable crab fritters. The pork belly pastrami was decent but the chicken fried quail was fantastic. Again, the quail was tender and moist, not easily accomplished.

My last day, I went to Mi Tierra for brunch. I did walk around Riverwalk several times and checked all the Mexican restaurants to see if any of them served menudos and found none. The menudos at Mi Tierra were pretty good (lots of delicious tripe and the soup was well seasoned). The combination platter (crispy taco, cheese enchilada, and tamal) was no better than your average tex-mex joint. Even on a shitty day, the place was packed though.

Ate at Rosario's at the airport. The menu didn't really have anything exciting on it so I got some chicken enchiladas. I picked at the food, drank my beer, and watched football. I don't think there's really anything good at terminal B. 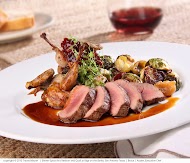 Biga on the Banks 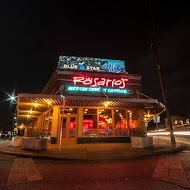 by Toniann Pasqueralle | Banana bread may very well be one of the greatest and most versatile gifts ever to be bestowed upon...

by Jen Wheeler | Is there anything more perfect than a steamy bowl of soup to fortify you on a bone-chilling winter...

by Patty Lee | The pastry case at a French bakery can hold a dizzying array of baked goods. There are breads, cakes...

by Pamela Vachon | If you're not accustomed to fancy restaurants and are nervous about exactly how to act or what to...

Easter Sunday and Monday in Rome