Take me to my post
Restaurants & Bars
Great Lakes Detroit

Packed a lot in during 5 days in Detroit and Ann Arbor (from Boston). On my way into town I decided to try Duly's for my first Coney Island dog since this seems to be such a thing in Detroit. It was super quick and easy and cost <$2 I think. I usually prefer a basic dog w/ onion but it was good and I liked the old school atmosphere. As I was in the area, I then stopped for one taco al pastor from Lupita with some special water whose name I forget. Cheap, nice, accommodating. Happened to pass Donut Villa and got a buttermilk but it was just ok. After some shots of Central Station, I checked into the Inn at Ferry Street and eventually took their shuttle to Rattlesnake down by the water. Had no idea I'd be so far removed from things and almost switched plans but sat at the bar and had crappy service from the long time bartender who had an article about him posted (Farouk?). Nothing I hate more than when you're not even nodded at, esp. with only 3 other people at the bar. Then he looks right at me and still doesn't say hello. I should have left but got their happy hour zucchini feta fritters w tzaiki sauce which were pretty tasty. He served the negroni in a martini glass which I hadn't seen. Whatever, it was early enough that I walked all the way back to the hotel (4.5 miles!), planning on hitting the Bronx Bar but when I saw the Old Miami, I quickly had half a cold beer in their beautiful backyard then a stop at the Whitney which wasn't on my list. Such a beautiful building and a very nice bartender who charged me less for the wine than listed.

Before heading to Ann Arbor on the 4th, I felt like I had to zip into Windsor. Unfortunately, there was no zipping on the bridge that day and no reason to see Windsor. Boarded up houses and many storefronts for rent plus a hassle on the way back into the States. Got to Ann Arbor and immediately went to Washtenaw Dairy for a maple nut donut and wandered around town, did some radio with my friend at WCBN then happy hour at Mani on E. Liberty St. That was very nice, a $5 drink special similar to a negroni, arancini HH deal and 3 of us split a bacon and arugula pizza. That nite after a BBQ and fireworks, we got a drink at the Jolly Pumpkin who are known for their beer but have some nice cocktails and a very nice bartender. Took advantage of the hot dog cart outside the Blind Pig, that guy does a fine job and offers homemade sauces and cole slaw. Headed out early Sat. morning taking Michigan Ave. back to Detroit with a stop at Dom Bakery in Ypsilanti for a sour cream donut. It was good but I'm afraid the MI donuts don't hold a candle to the LA mom and pop shops. As I got close to town I saw Telstar so stopped for a tiny cheeseburger slider before 10AM (had only eaten half my donut) just cuz it was there. I'm a sucker for that kind of long standing place. Wandered around Eastern Market then drove out Woodward to Ferndale with a stop at Great Lakes Coffee for a 12 oz iced coffee. $4 was sure pricey but the place is cool and has lots of craft beers. Unfortunately, Dutch Girl Donuts was on vacation so my donut taste test was over. Wandered around Ferndale, hit a good record store and enjoyed the Rust Belt art market (and the new wave music piped in on the streets).

Back to town to check into the Westin and meet my friend arriving from DC. We immediately headed out to Greedy Greg's BBQ on Sycamore, which had been on Anthony Bourdain's trip. Too bad Greg figured everyone was done with BBQ after the 4th and his tent was empty, but we were lucky enough to talk to him and get our pics taken. We really needed food before the Motown Museum so stopped at Hollywood Coney Dog and that was fine. I mean, I can't tell the difference anymore after a few dogs. Some guy was looking out for my car while we ate inside haha. Dinner that nite was at Cliff Bell's, wow what a beautiful place. I even liked the music and I'm not a jazz gal. Shrimp and grits were good (only 3 shrimp tho for $18) and J enjoyed his steak. Too bad the bartender barely paid attention to us. Walked around downtown and ended up at the Grand Trunk bar w/ good beers and a nice bartender and a good t-shirt to take home. Next day we wandered around the Packard Plant and Heidelberg Project then ate at Small Plates downtown just cuz we could sit right down and we were starving. J's huevos rancheros were different and good, my breakfast pizza ($10) was okay but a little too thick and big. Didn't realize when I got coffee next door at 1515 Broadway it was the same café I'd seen in the doc 'Detropia'. They advertise a free coffee w/ purchase of the Wurlitzer Building, haha. After more sightseeing, we stopped at Temple Bar on Cass cuz it had a great look and J had an afternoon beer. No one else there but a cat, dog and the nice gal bartending who wants to bring chamber music there.

We regrouped and got a drink from the LONG menu at Sugartown Sun. evening. Decent bartender, good drink called the Bronx and absinthe for J. Then it was off to Hamtramck for the Polish Village Café and splitting an order of mixed pierogies and the Hungarian pancake. Good stuff for cheap, nice waitress, foul smelling by the kitchen and restrooms. Walked down to the Motor City bar where the burgers looked great, music playing was horrible. Small's was closed so we headed to Jumbo's on 3rd St, played pool and talked with the locals. Mon. morning we went out to see the Grande Ballroom and stumbled upon Dabl's African Bead gallery and his really cool glass art outside at Grand River and W. Grand. A while later we made it back to the Westin and the taste test of Lafayette vs American coney island dogs. Even tho it had the right look, the people working at Lafayette were depressing. American is all big and bright but the people were nicer and I preferred their dog (grilled bun helps). J said he'd go to both but liked the dog at Laf better. Hung out at the Roasting Plant as it rained then more wandering and a taco at Jose's on E. Grand River, only open for a week. Their taco al pastor was large, cheap and yummy. We made it to the Roast happy hour where I spent my best $3 of the trip, the polenta and fried chicken liver appetizer. That was great. Well drinks were $5 so I had a refreshing grapefruit/gin combo and J had scotch, good bartender. We then met a friend at Buhl's which I assumed was more of a "craft" bar than it was. The bartender got a kick out of me asking for herbs and Domaine de Canton, etc. Had heard that the burgers at Bronx Bar were good but being huge didn't make up for the kind of flavorless, overcooked burger I got. Fried pickles were great tho and it's an awesome jukebox as long as it actually plays all the songs you pay for. Made another stop at the Old Miami to show those guys the backyard. Had read about something gong on at Northern Lights Lounge on W. Baltimore so hit that cool 50's looking place with a pretty patio. Played shuffleboard of all things while listening to decent punk rock.

Tues. morning we headed to the Henry Ford Museum in Dearborn but I stopped at Hygrade Deli first to get a pastrami sandwich to take on the plane. (Hard to choose between there and Mike's Ham place next door.) After the museum, we got lunch at Al-Ameer a few miles away. The waitress welcomed me back, not sure who she thought I was. I had a basic lamb and beef schwarma plate while J had a house specialty called arayes, basically a middle eastern quesadilla that I really enjoyed. Prices were about $10 and $15 and kept us full til landing in our respective towns. All in all a great time in Detroit and as you see advertised, I'll definitely "say something nice about Detroit". Thanks for helping out. 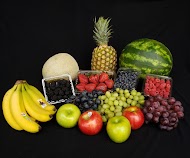 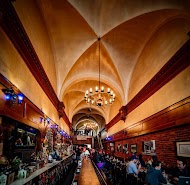 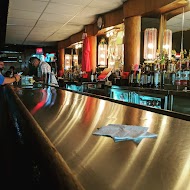 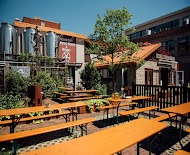 Beef and broccoli at home