March Cookbook of the Month: Jubilee by Toni Tipton-Martin Discuss
+

This is as close as you can get to the legendary and dearly lamented Boston Speed dog, which as I'm sure many people on this board know, the Wall Street Journal once called "America's Top Dog".

The original Speed, Ezra Anderson, is now in his 90's and retired, and his successor Gregg sadly passed away in 2013. But Larry Joe worked with Speed when he was thinking about expanding (and apparently helped train Gregg), so he has the bona fides to do a "White House" dog right (what I'm calling it, because it is based on the recipe reputedly served to the King and Queen of England when they visited FDR's White House).

1/2 pound, 100% beef, natural casing Pearl, cooked in apple cider/molasses, and grilled over hickory, split and served on a toasted bun with your choice of 8 condiments (no ketchup!).

Ask to try a "Traditional" frankfurter done up a la the original Speed dog with mustard, BBQ sauce, chili, relish, onions. But I actually think a "Western" sage & black pepper sausage, with BBQ sauce, relish, and just a little bit of hot pepper salad (spicy!) is even better, and the hickory smoke really comes through.

Is it as good as Boston Speed's was? Who can say? I haven't had one of those in ~5 years, and Larry Joe's recipe is similar but still different. But it is definitely worth the 40 minutes drive west from Waltham.

And Speed/Gregg never sang the blues while the dogs were grilling!

If You're Not Spiral Cutting Your Hot Dogs, You're Making a Huge Mistake 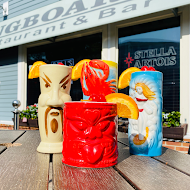 by Megan Meadows | If you're not a fan of corned beef, there are still plenty of delicious ways to celebrate St. Patrick...

by Caitlin M. O'Shaughnessy | If you're planning to down a few pints of the black stuff this St. Patricks Day, you'd be wise to...

7 Things to Do with Leftover Corned Beef

by Caitlin McGrath | One of the best things about the corned beef you've cooked for St. Patrick's Day is turning the leftover...

by Anna Gass | Although it may be difficult to muster up feelings of celebration on this year’s St. Patrick’s Day...

March 2021 Cookbook of the Month: Jubilee

Updated 6 days ago
Cookbook of the Month Cookbooks
3

What are you baking these days? March 2021 edition

What's lingering in your freezer or pantry? Use it up ideas