Italian Sandwich Shop-Deli from the 1890s?

I travel to NYC once a year, but it's probably been 15 years now since I went to a deli-sandwich shop established in the late 1890s in the ever-shrinking Little Italy. You just walked into a small store and ordered a sandwich. No seating, I don't recall sweets or hot tables, just a meat and sandwich counter. A small place and very old. This guy made me the "Combo" and it was a football-sized sandwich stuffed with the most magnificent cold cuts and peppers. It was on a corner and had black and white checked floor.

Does this place still exist? I've seen pictures of Di Palo's and others, and I don't think that's it. What's the oldest such joint still there? I'll be staying not that far later this month and was hoping to re-experience this sammich. 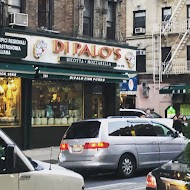