What Is the Difference Between Stock and Broth?

Stock and broth; two essential pantry items for any home cook. Though you can often “get away” with using water, having good stock or broth on hand can be the difference between a good and great recipe. But aren’t they the same thing? And aren’t they interchangeable in recipes that call for one or the other? Good questions. The answer is yes and yes, but also no. So then what is the difference between stock and broth? Let us explain.

Generally speaking, stock and broth are quite similar: water simmered with and flavored by meat and/or bones, and vegetables like celery, onion, and carrot along with aromatic herbs, then strained and used for cooking and to impart a depth of flavor that water simply can’t deliver (in the case of vegetable broth, meat is not used). Both are utilized as a base for soups, stews, sauces, and gravies among other things. Truth be told, some chefs use the words interchangeably, but there are key differences between stock and broth.

What Are the Key Differences Between Stock and Broth?

With regard to ingredients “stock is predominantly [made with] bones and some trim,” says Greg Fatigati, associate dean for curriculum and instruction for culinary arts at the Culinary Institute of America. As the bones simmer collagen is released creating a rich and viscous cooking liquid with a thicker more substantial mouthfeel.

Broth, on the other hand, is usually made without bones but rather pieces of actual meat and other parts, so it may have a slightly more identifiable flavor but less collagen and a thinner mouthfeel. Broth is a larger category as it can be made from any fish, mammal or combination of vegetables, while bones (and their collagen) are required to achieve a proper stock.

“Bone broth tastes more like a finished product than a cooking liquid, and can be served on its own,” says Nils Norén, VP of culinary arts for the French Culinary Institute. You can fortify stock with more meat to make broth and give it that soupy “finished” flavor.

Both stock and broth should be simmered slowly for at least a few hours to achieve the desired taste and texture, and while there is no hard and fast rule, the longer you are able to cook either broth or stock, the better they will be. Stock is especially reliant on a long cook to extract collagen from the bones and often times the bones are browned before any water is added to release even more.

When Should I Use Stock and Broth?

Now that we’re versed on the differences between the two, it would be wise to explore when to use stock and when to use broth. For practical purposes, if you’re making a recipe that calls for stock, you can use broth, and vice versa. So in some respects, the cooking liquids are interchangeable.

But because stock is richer, from all the collagen and gelatin released by long-simmered bones, and with a deep and concentrated base of flavor, it is perfect for hearty stews and sauces. Anywhere a deep, complex flavor is desired, basically. Broth, on the other hand, has a less intense, more nuanced flavor and can be used in place of water for a flavorful blanching or boiling liquid, to thin out a sauce or risotto, or as the main broth for most quick soups.

If you’re not making your own stock or bone broth (which you absolutely should; see recipes below) you can find canned or boxed broth at most grocery stores (stock is not as widely available). You can use this for any recipe that calls for stock too, but try to find a low-salt version because store-bought broth generally contains high amounts of sodium.

Why Is Everyone Drinking Bone Broth?

They’re not. The healthy bone “broth” trend you’ve been reading about is actually a bone stock trend since the whole thrust of the concept is consuming mass amounts of nutrients and collagen (found in bone stock) to support gut health along with other health benefits like preventing osteoarthritis, bone decay, and chronic inflammation. The term “broth” seems to have been implemented merely as a marketing maneuver, sounding more like a ready-to-eat food than “stock”.

Related Reading: Everything You Need to Know About Bone Broth | The Best Bone Broth You Can Buy

How Long Do Stock and Broth Last?

Both broth and stock will only keep a few days in the refrigerator, but you can freeze both for months. Tip: if you anticipate having to use stock in various small and large amounts, freeze it in ice trays and then transfer the stock or broth cubes into freezer bags to use at will and in the desired quantity.

Now that we’ve covered the key differences between stock and broth, learn to make both and store them in the freezer so you’ll never be caught without.

This homemade stock of chicken bones, carcass, vegetable, and fresh herbs can be made ahead of time and frozen for use whenever. There is no substitute for real homemade stock, but feel free to use a pressure cooker or Instant Pot to speed up the process if you’re short on time. Get our Basic Chicken Stock recipe.

Classic mirepoix vegetables and earthy mushrooms combine in this homemade vegetable broth. Perfect to start a soup or stew, or thin a sauce, or simply eat (drink?) on its own for a bit of fast, low-calorie, warming sustenance. Get our Basic Vegetable Broth recipe. 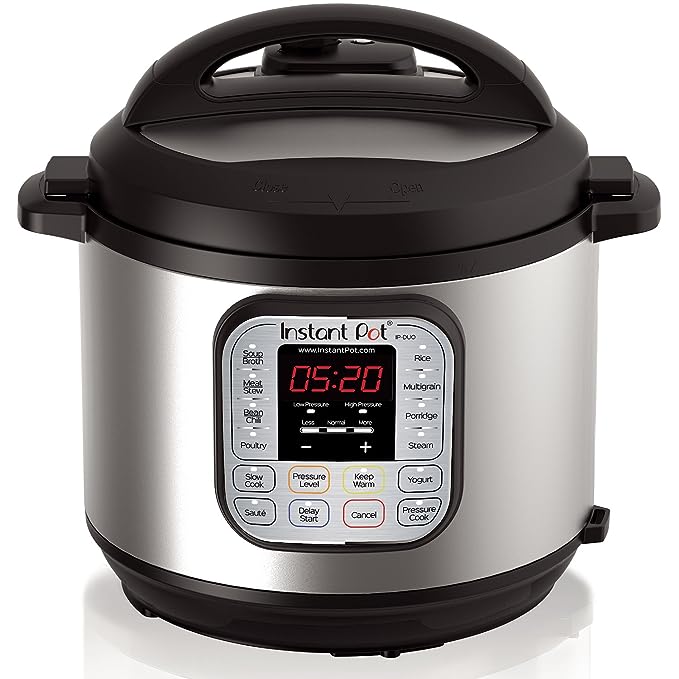 A pressure cooker can greatly speed up the broth or stock-making process!

Rip off some chicken from a rotisserie bird, heat up some noodles, and add the vegetables and other ingredients. Then, enjoy all those lovely flavors of ginger, basil, jalapeño, cilantro, Sriracha, and lime. Get our Quick Chicken Pho recipe.

This is a real Southwestern comfort food with just a few ingredients yet not short on flavor. Smashing some of the cannellini beans thickens the broth, and a squeeze of lime juice at the end balances the richness and heat with a bright kick. Get our White Chicken Chili recipe.

Ooh, some roast beef and an au jus created with meaty bones and beef broth is just the thing. Add some crunchy-crusted French bread and you’re cooking with gas…and bone broth. Get our French Dip Sandwich recipe.

Using a good quality stock or broth in place of water makes all the difference when cooking soups and stews. All sorts of spices plus some vegetables go into the soup besides chicken and tortillas. Here’s a way to make Tex-Mex into a fall meal. Get our Chicken Tortilla Soup recipe.

The nutty flavor and delicate chew of this ancient grain, farro, make this risotto a hearty and rustic dish. And with wild mushrooms, you’ll taste heaps of umami. Get our Easy Mushroom Farro Risotto recipe.

If you’re a devout vegetarian but find vegetable stock a bit bland, add some earthy ingredients like button and/or cremini mushrooms to the mix. It’s not technically a bone stock but it will taste pretty darn close. Try our Easy Mushroom Broth recipe.

Related Video: How to Make a Quick Shrimp Stock