It’s no secret that celebrities, as a rule, are well….odd. They wear strange clothing, say bizarre things, and come up with truly the most mind-bogglingly odd and awkward names for their poor unsuspecting children. All presumably in the name of ATTENTION!!!

Knowing this, it should come as no surprise that when it comes to food and dieting, celebs gravitate towards the weird and wacky at a far higher clip. No, the keto or Paleo diets, which seems to be working wonders for millions of us normals, simply won’t do. When it’s time to slim down for a role or shape up for the dazzling premiere, big game, or awards ceremony, celebs will go to the ends of the earth to find the most shocking ways to do it. From extreme color coordination to baby food, and even the good ole’ Bible—here are a few of the doggone strangest celebrity diets out there.

Just this year, funnyman turned action hero Chris Pratt has come under fire for his affiliation with trendy Hollywood super-church, Hillsong. As part of his new-found faith, Pratt was called by the holy spirit into a biblical fast, also known as the “Daniel Fast.” The diet is based on an Old Testament Jewish hero Daniel, and asks participants to avoid rich and indulgent “Royal Foods” like meats and booze for 21 days in order to draw closer to God (not unlike Lent). The modern version of this is virtually a combination of veganism and Whole30, restricting most animal products along with preservatives, flavorings, sweeteners, caffeine, and anything made with white flour.

U like fit’niss? How bout fitt’niss insta post up ya butt? Boom! #WHATSMYSNACK Thanks to @mensfitnessmag editor @shawnperine photographers @rikerbrothers the writer #JimSchmaltz and of course my dear sweet Bridget for grooming. @bridgetbragerhair and my publicist @allison_garman and God and of course Spider-Man for me stealing his pose. On newsstands now! #starlord #gotgvol2

Though not many stars have actually fessed up to this one, A-listers like Lady Gaga, Jennifer Aniston, and Reese Witherspoon are all reported to have been spoon-fed the baby food diet at various points in their careers. Also known as the “Gerber Diet” and conceived by celebrity fitness guru Tracy Anderson, this one’s fairly simple and calls for dieters to essentially replace breakfast and lunch with as many as 14 jars of low-calorie baby food. Mashed peas for lunch, anyone?

I don’t know if choosing a diet based on it rhyming with your name is wise or not but who are we to question reality TV icon Nicole “Snooki” Polizzi of “Jersey Shore” fame. A few years back Snooks turned to Dr. Siegal’s cookie diet where participants eat up to nine of his special protein-heavy, diet-suppressing cookies per day, along with a sensible dinner. An infamous party girl, Snooki also gave up “binge drinking” while on the diet in an effort to shed some unwanted weight. Dr. Siegel has been courting celebs with his cookie diet since the 1970s with mixed results reported. 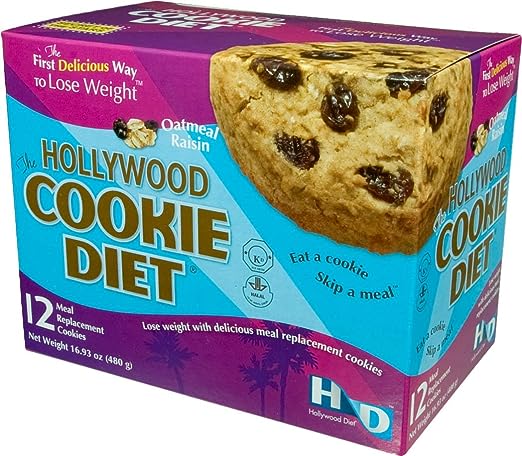 According to multiple reports, ’90s pop sensation Xtina has attempted the “7-Day Color Diet” on a few occasions. This one requires would-be weight losers to eat more fruits and vegetables by challenging them to binge a single color per day (white, green, yellow, orange, red, purple etc.).

It may sound odd at first but of all of them, this diet is perhaps the one informed most by sound logic and science. Rooted in the National Cancer Institutes 2002 “Savor the Spectrum” campaign which underscores that different food color categories contain different health benefits, so it’s important to try and incorporate as many as possible.

Add a little color to your diet plan!

The actress who starred in “Big Little Lies” and “The Fault in Our Stars” once told David Letterman that she, well, eats clay as a way to detoxify the body. The theory here is that clay, with a negative charge, helps to expel toxic metals containing the opposite charge, resulting in metallic smelling, um, bodily discharges and reportedly cleaner insides. The clay diet is not yet known to be either effective or safe and so we’d suggest exploring with extreme caution.

We forgive you if you’ve stopped reading after the headline, but yes, Madonna allegedly went on an Air diet back in 2010 after a French ad she was cast in played with the ancient spiritual concept. Rooted in breatharianism, which posits that the enlightened among us can live simply on sunlight and water alone, subjects of the Air Diet actually buy, prep, and cook food only to stop short of eating it, letting only the aromas of the food enter. Sound too constricting? Don’t worry, a delicious-sounding “soup” consisting of only salt and water is, in fact, allowed!

A few years back, 6-time Super Bowl winning (and greatest quarterback of all time) Tom Brady, let the world in on his rather dramatic diet. Brady describes the diet as “a mix of Eastern and Western philosophies” with principles that “have been around for thousands of years.”

The TB12 Method: How to Achieve a Lifetime of Sustained Peak Performance, $18.29 on Amazon

The Weirdest Celebrity Cookbooks Are Also Kind of Irresistible

We Can't Look Away from These Questionable Celebrity Cookbooks