Your Super Bowl Drinking Game for the 2019 Halftime Show

Super Bowl 2019 is nearly upon us, which means you’re probably scrambling to assemble your snack spread, and eagerly anticipating the new crop of commercials that will air this year. Whether you are more or less excited about the Super Bowl 2019 halftime show—featuring Maroon 5, Travis Scott, and Big Boi (of Outkast fame)—it’s happening, despite plenty of controversy. However you feel about it, may as well turn it into a drinking game! It can only make it more enjoyable, either way. 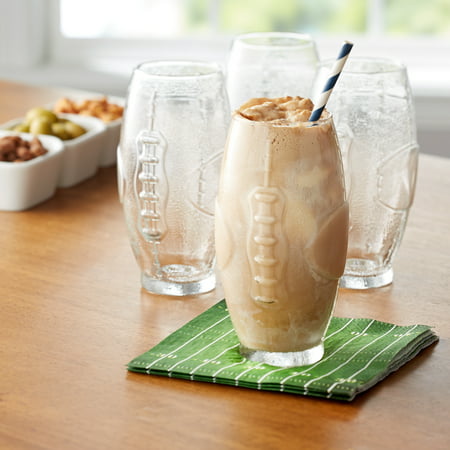 Order these so you can chug your suds in style.

As you may know, several artists, including Jay-Z and Rihanna, turned down the chance to perform at the 2019 Super Bowl halftime show (in case you’re somehow unaware, read up on the controversy for some background). Enough shade has been thrown and straight-up scorn cast out from social media that Maroon 5 must not be feeling any “Sugar.” USA Today has gone so far as to declare that the halftime show is “no longer a cultural institution.” But we all know hundreds of millions of people will still be watching—unless, like 75 percent of the country right now, hell actually freezes over and they cancel it. They did cancel the pre-show press conference already, but it’s highly unlikely the actual performance will follow suit. And so, we offer this list of suggestions for turning it into an interactive event.

A word of advice: stick to beer, the lighter the better in this case. Definitely do not try this with cocktails (but do check out our Rams and Patriots Inspired Super Bowl Drinks)! And if you’re too old (ahem) and/or sensible for drinking games, or just don’t do booze, turn it into a fitness challenge instead, where jumping jacks or burpees replace sips and chugs (your keto Super Bowl guests should be into that)! Just approach any such feats of daring—drinking or dropping-and-giving-20—with caution, and always use your best judgment; we wouldn’t want anyone hurting themselves, or others. Or ruining their host’s TV, whether through physical damage of the blunt force variety or, um, liquid immersion.

Take a drink if:

Finish your drink if:

Whether this year’s spectacle will produce any meme-worthy moments to be added to the most memorable Super Bowl halftime show events of all time remains to be seen—and if you watch it live, you’ll know right away. Plus, you’ll get to sneak in some extra drinks (or push-ups) if you play along.

There’s still time to enter our sweepstakes in honor of Super Bowl LIII on CBS! We’ve joined forces with CBS Sports, CNET, and TV Guide to give away a party-perfect prize package that includes an LG OLED 65-inch TV (courtesy of Daily Steals), a 6.5 Liter Chefman Air Fryer, and $125 in gift cards for CBS All Access. Enter for your chance to win before 3:30 p.m PT on February 3, 2019!