What Is the Difference Between Frosting, Fondant, and Icing?

They're all classic cake coatings, but which one's your favorite?

Frosting, fondant, and icing—they’re all sweet and commonly used to cap off cakes, but what exactly is the difference between them? All three include a base that is typically a liquid or semi-firm solid such as water, milk, egg whites, or cream cheese and all include the addition of sugar, usually either superfine, granulated, or confectioners’.

The virtues of the sugarbomb that is icing has been appreciated in recipes since at least the 18th century and as an ingredient for finishing off cakes and other sweets since the 17th century. Fondant, its more pliable cousin, has been incorporated into recipes since the 16th century. Frosting, with its fluffier texture and opaque color, has been around since at least the 19th century. Cakes frosted in white icing were even fit for queens with Queen Victoria being the first monarch to indulge in an iced cake at her wedding, hence the name “royal icing.”

Each one has its virtues and is appreciated by professional home cooks and bakers for different reasons but no matter which one finds its way to your favorite pastry recipe, one thing is certain: All of them will satisfy your sweet tooth and leave you with a sugar rush that is as addicting as it is fun to eat.

Frosting is typically fluffier and thicker than its fondant or icing counterparts with an opaque color and stiff texture once it dries. Because butter is often added to a frosting recipe (hence the name buttercream frosting), it often has a rich, buttery flavor, but its base could also consist of cream cheese or heavy cream.

Sugar is also added to frosting and because the resulting texture is soft but firmer than icing, it stands up to being piped into shapes. Its solid characteristic also means that it can be used as the base for cake layers but it’s also dreamy in whipped form atop sweets like cupcakes or cookies. 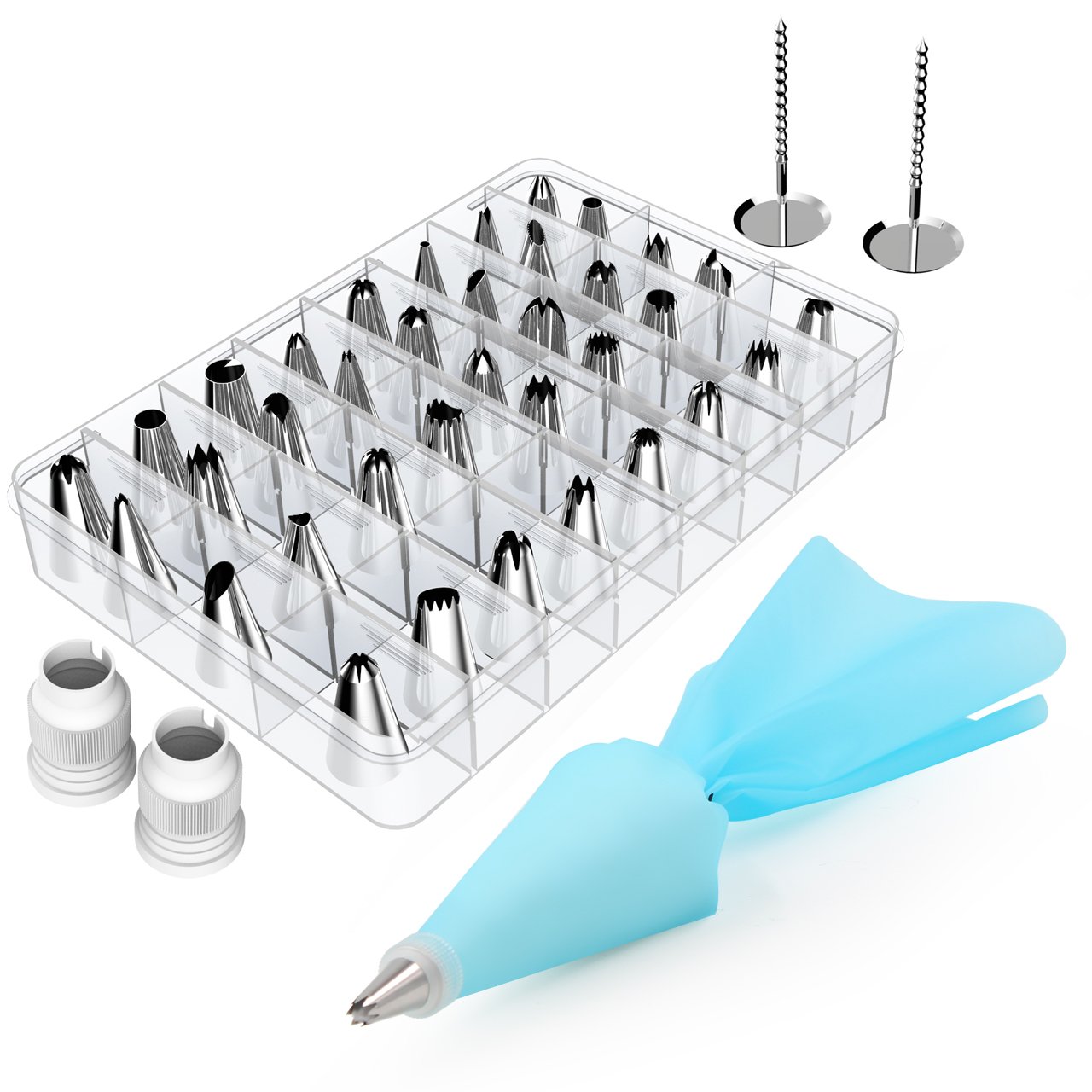 Kootek Frosting Tools Set with Piping Tips and Bags, 42 pieces for $11.99 on Amazon

A set to handle all your piping needs.

Icing’s trademark characteristics are its glossiness and the way it languidly runs over the item being iced. It begins as a thick, creamy liquid but it hardens as it dries, making it both easy to apply as well as to serve. The first step to making an icing is to begin with a liquid base such as water or milk, although eggs, softened cream cheese, or melted butter are sometimes used.

Sugar is then added. Typically the sugar used is confectioners’ since it results in a silkier, glossier texture than granulated sugar. Sometimes colors are added before icing but it’s just as appealing in its snow white incarnation.

Fondant comes in two forms, poured and rolled. Like icing and frosting, it typically contains sugar, shortening, and a liquid, typically water. Corn syrup is added to poured fondant to create its glossy sheen and to facilitate the hardening that takes place when it’s drizzled over pastries, such as eclairs.

Rolled fondant can be used almost as a dough because the addition of gelatin causes it to solidify before it’s not poured or spread but instead wrapped around cakes and other pastries. Rolled fondant is a professional baker’s darling because its stiff texture enables it to be shaped into virtually any desired shape. Too much of it isn’t quite as fun to eat, though.

How to Use Frosting, Fondant, and Icing

Here are some sweet recipes that use all three to different effect.

This deep chocolate sheet cake is a snap to pull together, and is a special treat for frosting lovers, as the layer of rich, fluffy mocha buttercream is almost as thick as the cake layer itself. Get our Easy Chocolate Sheet Cake with Mocha Buttercream Frosting recipe.

These indulgent cinnamon rolls are the only thing you’ll need to wake even the deepest sleeper in your household and entice them to the breakfast table. The chunky bits of chocolate that melt just so take these rolls to the next level. The homemade dough is not as challenging as it might seem but if you don’t have the time, swap pre-made dough—just don’t skip the cream cheese frosting; it pulls everything together and adds just the right amount of tanginess. Get the Chocolate Brioche Cinnamon Rolls with Cream Cheese Frosting recipe.

Using nonhydrogenated shortening and margarine plus powdered sugar, non-dairy milk, and a touch of vanilla results in a luscious vegan buttercream frosting. Just whip it good (a stand mixer is helpful for this). Get our Fluffy Vegan Buttercream Frosting recipe.

There is so much happening in every bite of these frosted cookies but not enough to distract from their chewy texture and the little nubs of pistachios that add the ideal counterpoint to every tender bite. Lemon brightens everything up and if that weren’t enough, the silky coconut icing recalls your favorite beach holiday, if your holiday included cookies as masterful as these. Get the Chewy Lemon Cookies with Coconut Icing and Pistachios recipe.

Powdered sugar and amaretto (or any booze you choose) are all you need for a simple glaze to dress up pound cake; crunchy toasted almonds lend a nice counterpoint to the tender crumb and sweet icing, and this works all year round. Get our Amaretto Pound Cake recipe.

This moist loaf cake is bursting with juicy blueberries and has a sweet-tart lime icing drizzled liberally over the top (plus a lime syrup soaking into the cake underneath the shiny top layer). It crosses the divide between breakfast and dessert, so you can serve it all day. Get the Blueberry Lime Loaf Cake recipe.

Sushi is probably the last thing you consider when you think about fondant but never fear, these whimsical mini cakes have nothing to do with fish and everything to do with flavor and fun. Store-bought colored fondant, a little coconut and a few other ingredients, and a tremendous amount of creativity transform simple elements into something extraordinary. These are wonderful cakes to serve at your next party where ordinary doesn’t have a place at the table. Get the Sweet Sushi Mini Fondant Cakes recipe.

Elegant and flavorful all at the same time, this fondant cake dressed with a flourish of colorful autumn leaves drifting down along the sides is a treasure. The trick for shaping the delicate leaves is an egg carton that rounds each one out in an organic way reminiscent of how fall leaves break free from their branches and drift gracefully to the ground. Get the Autumn Fondant Cake recipe.

I’m dreaming of this crazy easy Cinnamon Caramel Apple Cake for Thanksgiving next week! 👩🏼‍🍳 Find the recipe by clicking the link in my bio & then click “DomesticallyBlissful.com.” You can then find the recipe by scrolling down or by searching “cake.” 📲

Of course, fondant isn’t the only option for tall, impressive layer cakes, as this one proves handily. There’s no other word to describe this gorgeous cake than “masterpiece.” From its cozy autumn flavors to the way the stacked cake layers peek out from the frosting (not to mention the caramel-lacquered apples crowning the top), this beauty is a spectacular way to conclude a festive fall celebration. Whipping the cream cheese frosting gives it an airy texture that creates a fluffy base for the spiced cake and the caramel sauce dripping lazily down the sides make it almost too good to be true. Get the Cinnamon Caramel Apple Cake with Cream Cheese Frosting recipe.

Header image by Chowhound, using photos from Pixabay and Chowhound