last night four of us dined at chef yu or yuyu za zang in oakland. my friend and i are interested in sampling a variety of different versions of the noodle dish known variously as zha jiang mian, jja jang myon, za zang (which anglicized this way doesn't make sense to me because there is no Z sound in the korean language), and i think at san wang in japantown as noodles with plum sauce. which makes even less sense. in english, i think "noodles with black bean sauce" is more accurate when describing this chinese dish and it's much loved korean cousin.

so last night we tried this spot in oakland. we ordered the regular jja jang myon, the seafood gan jja jang ("dry" jja jang. i've never understood how it can be dry when it is still coated in sauce), fried mandu, cold jellyfish salad, and tang su yook, or sweet and sour beef.

the seafood gan jja jang myon came with a breathtaking amount of crudely chopped onion and a child's handful of overcooked squid. i thought the noodles were too soft, and the sauce tasted...limp. the regular jja jang myon was better, but still seemed to lack any of the fermented funkiness that jja jang or chun jang pack. it looked right, but it just tasted one dimensionally rich. again, overcooked noodles.

the jellyfish was tart and sweet, but i prefer this to come with some more mustardy heat. fried dumplings were satisfying in the way that freshly fried crispy food can be.

tang su yook was probably my favorite, but that may just be that i haven't had korean style sweet and sour in many years. chunks of beef that seemed lightly tossed in corn starch or rice flour came fresh from the fryer on a platter, with the sauce on the side with slices of napa cabbage, carrot, onion and pineapple. i wish i could find a place that served this with the combo of cucumber, onion, and wood ear mushrooms that i encountered years ago in korea. the sauce had a pleasant vingerar tang, and although it was sweet, it was nowhere near the sugary syrup that coats american chinese versions. plus...it wasn't orange.

so overall, a disappointing dinner, but maybe an inspiration to search for better versions of both chinese and korean noodles in _______ sauce. 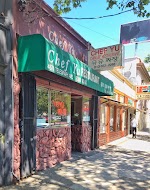