Hi Chowhounds - we had an relatively unusual Vegas trip for us - more casual eating punctuated by a few awesome dinners. It was our first time at Kabuto and the meal pushed us towards a realization that we've been approaching: anything but stellar sushi is really not worth it. Kabuto upped our game big time; we'd never had an omakase before and we'll be saving our bucks for the fine places in DC that offer it. Everything was fresh and immaculate, the service wonderful, the presentation beautiful. We did the $80 version and the only thing we didn't really care for was the grilled course - next time we'll go without it and order more off the menu. We also felt it was a little heavy on the tuna (Spanish), which was delicious but also served three or four ways. The umi was spectacular. My husband loved the mackerel. Even the green tea tiramisu was divine and since we were already feeling a bit too full for our planned stop at Raku sweets, it definitely put an end to that dream. Next time.

I'll quickly say that we did several in-room breakfasts at the Mandarin and can give it high compliments. It's the exact same price for the same meals at MoZu, so I can say that it's definitely worthwhile for an upscale breakfast, like a work meeting. Bread basket was particularly good with an out of this world blueberry muffin. Little treats like diced dried tropical fruit with the oatmeal made the ordinary special.

We grabbed a few slices for lunch one day at the new Five50 (weird name) in the Aria and it was good pizza. I had the foragers, white based with ricotta, spinach and mushrooms, and it was very good, but very oily. My husband loved the traditional red sauce with meats.

We meant to make a meal of happy hours at the Cosmo, but many of those great deals are unavailable on Fridays, so we got a bunch of apps at Comme Ca, which was one of the few venues doing the "social hour" on Friday. It was ok. I wish I could give it higher praise, and I don't know that we had a broad enough range of food to really judge it -- for instance, I would have liked to try the escargot pie but we loaded up on other choices, including a charcuterie plate and a cheese plate, which I didn't really taste. The octopus was just fine - wrapped in some kind of meat which wasn't mentioned in the description and which we didn't identify. The tartare was similarly good but nothing to sing about, with the poached egg yolk just sitting on top waiting to be mixed in and nothing much else going on in way of seasoning. We had a pickle jar, but everything came with pickles and they weren't particularly good or bad. The company was much better than the food.

Our highlight was a 40th birthday dinner at Bazaar Meats, which didn't disappoint - much. Highlights, by far, were the exceptional beef tartare, which would be delicious on its own but came with delectable warm Parker rolls that sent it over the top; the famous cotton candy foie gras, which would convert a vegetarian; and the "smoke and ice" oysters, whose applewood smoke permeated the whole table and which were off the charts in unique but unadulterated pleasurable taste. The place is just so crazy expensive that it's hard to relax, knowing that each tiny slab of tuna is $8, for instance. A lot of choices were delicious but not price worthy ($22 leche de tigre clams; the small portion of octopus for $18 that was really elevated by the homey potato and paprika accompaniment.) Vegetables, particularly brussel sprout petals and cauliflower, were excellent. The concept is really neat - truly a tapas approach to a steakhouse - but for us the disappointment was the meat itself. The whole meal refers to this coming glorious steak, by layering courses with seafood first, then tartares and meats, to prepare for the total carnivorous glory of the steak (or pig or other "central" meat dishes). They even bring very elevated small trays to hold up the meat above the heads of the diner on the table, and when it arrives it looks Flintstonian spectacular, with the ruby red slabs cut away from the bone. The meat was: good. Maybe really good. But not out of this world, blow me away spectacular. And for $50 pound, on the bone, it really should be. Translate this way - each bone-in rib eye weighs about 2-1/2 pounds. So you're paying $125 for a steak that yields about 12 oz of edible meat. At those prices, you need to be elevated by the actual eating experience, and not just by the height at which it is served or the pomp and circumstance surrounding it. When I took a bite of meat that exploded with flavor, I realized it was from one of the sparse flakes of sea salt that had been scattered too judiciously. I'm not sure whether to take from the experience that even spectacular meat needs seasoning, or whether this price point will always deliver disappointment. I'd also say the wine list leaves something to be desired - not a single cab in this meat-centric restaurant for under $170 or so. And no sommelier, at least as far as we could tell - no one came by, and when we made inquiries of the waiter, he never offered to deliver one. Long and short, we'd go again, but only to the bar to have the oysters and tartare with cocktails. And even then it's not too likely we'd go all the way to the isolated end of the strip where SLS resides just for apps. Since we're from DC, we're spoilt for Jose Andres choice, and most of those (like the wonderful Zaytinya, which starts your mezze meal with hot pita and pomegranate molasses laced olive oil) at least start with free bread!

Before our late dinner at Bazaar, we stopped into Cleo for a drink and quick app, and were glad we did. It's a nice atmosphere and the appetizer we got - carrot harissa - was great and reasonable in price ($7). It came with a large hot piece of laffa bread - tasted a little in between laffa and focaccia, actually, but it was very tasty. The harissa could have veered into baby food territory but the pureed carrot was topped with sliced ones, and the spice profile was not just spicy, but also varied and complex in flavor. No baby would eat it, which is why we loved it!

Finally, a dilemma for the ages. To buffet or not buffet for the Vegas foodie gourmet? We've always stayed away, although I've been severely tempted by Wicked Spoon since it opened. On United, however, they're gifting passengers with coupons to Cosmo joints, and there was a 2-for-1 offer for Wicked Spoon. We had to go. It was really quite great! Not for the brunch purist, maybe, and definitely not for the person who wants to inhale crab legs and shrimp cocktail (they had neither). I was craving Thai and we had to end this trip without a visit, so I started on the Asian side of the buffet. I grabbed a tiny cone of lemon cream and pesto that was delicious and that never reappeared. The papaya salad was not a highlight, quite salty, but I loved the five spice duck wings and the ddeok, which I'd never tried before. Later, they put out some delicious takoyaki with shrimp (got it fresh which I'm sure made the difference). Kale salad was way overdressed, but really good when tucked into the beef brisket benedict. Almost everything I had ranged from good to great and really nothing was inedible (the sushi innards were not bad, but I couldn't waste space on the gummy sushi rice). A tiny bite of smoked salmon pizza just reminded me that smoked salmon never needs to be recooked. Gnocchi in boar ragu were nice, and my favorite was probably the chestnut risotto, which was perfectly toothy and creamy and rich and the thinly sliced chestnuts sweet and meaty, not overcooked. Dessert was the main disappointment (it's a visual feast, though!) Pumpkin eclair, so promising, was just bad. Baba al rhum was tasty, as was a layer cake with a creamy coffee and a crunchy layer. I didn't like the Thai tea ice cream which I know many others have praised. Tip for the brunch purist is to arrive early, and for the buffet purists to arrive later - they were replacing a tray of eggs in purgatory with a hearty seafood stew (lots of shrimp and squid) when I was already on to dessert). I'm hungry just writing this.

Great trip, as always. Thank you Vegas, for offering the best of high and low cuisine! 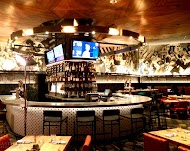 How to Navigate Cheap Wine and Score the Perfect Bottle

by Amy Schulman | There is no shortage of cheap wine in this world, but if you want good cheap wine, there are a few...

by Jen Wheeler | Is there anything more perfect than a steamy bowl of soup to fortify you on a bone-chilling winter...

by Patty Lee | The pastry case at a French bakery can hold a dizzying array of baked goods. There are breads, cakes...

by Pamela Vachon | If you're not accustomed to fancy restaurants and are nervous about exactly how to act or what to...

First time in the history of my Refrigerator