The Shop Breakfast and Lunch

Take me to my post
Restaurants & Bars
Southwest Albuquerque

Had breakfast today at The Shop - Breakfast & Lunch in Nob Hill. It's on Monte Vista just north of Central (in that tiny plaza at the South-Eastern corner of the UNM Main Campus, where Girard, Central & Monte Vista all intersect kind of awkwardly).

I think this is a place to watch. -- Still working out some stuff, but with its heart in the right place.

Here's the menu: http://www.theshopbreakfastandlunch.c... They serve shrimp and grits for breakfast, which I think, in and of itself, makes them worth a visit.

The price range is about the same as Flying Star, but there's a lighter touch and more of a home-made flavor to the food. It feels like an earnest young chef and crew are trying their best to do something that's a few steps above what you get in most restaurants at this price point in Albuquerque.

There's a little awkwardness in some of the dishes -- a weird butter sauce on the shrimp and grits, a jumble of salsas on the huevos rancheros, -- but even the missteps seem to come out of a considered effort to make something wholesome, fresh, and different from the usual chile cheese melt. Overall, the flavors are nice and the ingredients seem to be of good quality.

They serve Ohori coffee which thrilled some people. (I don't drink coffee, so I don't know.) The service was calm, friendly and efficient, but it was nearly empty when we were there so I can't say how it would be in a crush.

The Shop is solidly good now and they offer a more interesting breakfast selection than most other places in the city, but I think it has the potential to be really good and maybe even great. -- I hope it lasts long enough to get there. 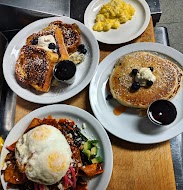 The Shop Breakfast and Lunch

by Amy Schulman | In this politically charged climate, oftentimes we feel helpless. The polar ice caps are melting...

by Shelly Westerhausen | Although risotto is one of the simplest meals you could whip up, there is something undeniably fancy...

by Chowhound Editors | A sauce of canned tomatoes tempered with cream is a no brainer for pasta. This recipe, however, which...

How to Make Chocolate Mousse

by Miki Kawasaki | It’s not often that you run across a homemade dessert that can be made easily and on a whim (save...

Recipes from Smitten Kitchen blog... what are your favorites?

Easter Sunday and Monday in Rome

What are you baking these days? February 2020 - Tenth Anniversary Edition!

Updated 2 hours ago 118 comments
Baking What Are You Baking? Cookbooks