Chop, Dice & Save $50 on a 2-Piece Zwilling Knife Set
10 Cooking Tools from Around the World You Didn't Know You Needed
+

For my first time at Sammich, I ordered the signature sandwich, Pastrami Zombie, made famous at its cart of the same name. I'd been unaware of the owner's Chicago roots, that became apparent with the flying W, Italian beef and Wrigley salad offerings.
https://www.chowhound.com/post/ne-por...

The Pastrami Zombie is described on the menu as "house-brined, smoked, steamed pastrami on sour rye w/ swiss & slaw. russian sauce (our favorite) or mustard… 14". Half-sandwich orders are not offered here. I liked the chewy rye bread's flavor though it lacked the crunchy crust of corn rye. The proportions were off with way too much of the crunchy, simple slaw burying the small portion of pastrami. Much better when I removed some of the shredded cabbage, but even then, the pastrami was not that flavorful. It was also dry and brittle, falling apart into crumbs. Though the thin slices had a streak of surface fat, the meat was not marbled. Also, the pastrami was room temperature and not hot, and therefore, the swiss cheese did not soften nor melt. Not at all impressed by this pastrami or the composition.

Sammich uses counter service, where you order and pay at the cashier. In my case, my food was brought to my picnic table outside, and the I was told I didn't need to bus my own dishes. The brisk air was refreshing and there was just enough umbrella cover to stay dry during the intermittent sprinkles. I was bathed in smoke from the puffing smoker. 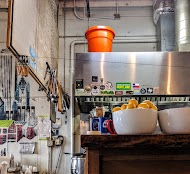 Treat Yourself to Tapas at Home for a Virtual Spanish Vacation

by Jessica Merritt | With coronavirus making travel a tricky and even potentially dangerous prospect this year, we're embracing...

by Pamela Vachon | With coronavirus making travel a tricky and even potentially dangerous prospect this year, we're embracing...

by Caitlin M. O'Shaughnessy and Jen Wheeler | With coronavirus making travel a tricky and even potentially dangerous prospect this year, we're embracing...

11 International Sauces to Enliven Your BBQ, from Aji Verde to Zhoug

by Pamela Vachon | With coronavirus making travel a tricky and even potentially dangerous prospect this year, we're embracing...

An argument AGAINST sit-down dining during the pandemic

What are you baking these days? July 2020 edition!

Updated 3 hours ago 107 comments
Baking What Are You Baking? Summer
5

Updated 3 days ago 21 comments
Dish of the Month