I was looking at my Yelp feed this morning and realized I had hit a few new spots and a few old favorites this past couple months and thought I would share some impressions, the good, the bad and the so-so. First off, Bangkok Golden at 7 Corners is now Padaek, but the Naem Khao is still one of my favorite dishes anywhere in NOVA. Excellent dish!

Peter Changs at Lee Harrison in Arlington is back on its feet after a rough season of really slip shod dishes. I have tried their Flounder and Sour Cabbage soup which was really tasty and perfect for a cold day. The King Oyster Mushroom Casserole is also really worth trying, tons of mushrooms and just enough protein (pork?) to make it filling. The bubble pancake still confounds me, not sure what to think of it. Kind of bland, dipping sauce is ok, though. The Big Bun also underwhelmed. The Grandmas Noodles were a slightly peppery bowl of hot rich noodles, very nice.

I also hit Ghin Na Ree just next door a couple times and the older gent that runs the place has upped his game! I ordered Red Curry and was pleasantly surprised by a rich, nicely spicey dish that reminded me of street food in Thailand. The pork was only ok but the dish overall was an incredible bargain, almost too much food. The apps were a thin, very tasty soup that I couldn't identify and failed to ask and a small, slightly overcooked spring roll. But a great bargain and a good lunch.

Now for something a bit different. I have been hitting Harris Teeter at Lee Harrison for lunch on Thursday for their carry out "Prime Rib" with potatoes and steamed table vegetables. It is a huge portion of what I would call a boneless standing rib roast, if there is such a thing, slightly fatty, completely delicious and served medium rare with a tub of horseradish if you ask for it. Man! That is a satisfying dish! I end up making a sandwich out of the leftovers the next day and it is almost tastier cold!

I also hit a Lebanese place called Raouche next to the H-Mart in Merriefield. The lentil soup was pretty good! The soup came out pretty quickly, hot and tasty. It was not complicated, just a bowl of lentil soup like Mom makes, if she is Lebanese... If I was at home I might be tempted to put a dollop of sour cream or its Lebanese equivalent (?) in for a bit of a taste counterpoint. The lamb kabob sandwich is a small wrap but very tasty. Decent amount of hummus and what tastes like sumac. Not a huge meal but it hit the spot and the price is right at just $3.50 for the soup and $7 for the sandwich. Very nice, well worth returning.
Hit H-Mart on my way out for the one item I keep coming back for. Kimchi Mat in the 1 liter container. They were out so I got "Kimchi for Sul Long Tang" (ox tail soup) and it was very similar to the home made Kimchi Mat. Very spicy, just an outstanding kimchi.

Went back to Ichiban in McLean after a long time away. Went on a weeknight, no line, but crowded. I have always liked the Spicy Tuna Roll there but I changed up and got a Utah Roll and it was really nice, my friend got the Rainbow Roll and it was delish as well. Food was pretty good but the waitress was really pushing us to give up our plates and leave. Service was too rushed.

Hit RT's on Mt. Vernon after many years away. They may have dusted the decorations but nothing has changed. Ordered my old favorites, She Crab Soup and Crawfish Etouffe, both were rich and delicious. Very good, not great but worth coming back for.

I took a hint from the Tyler Cowen Ethnic Guide and tried out the buffet table specialist, Hunan Gate but ordered off the menu for a couple of appetizers. The Julienne Potato Salad makes a very nice starter dish, but even as an appetizer it is just too much of a simple dish to finish. I couldn't get the chive pot stickers that Tyler liked, so I tried a pork dumpling and it was only ok. I like Tyler's guide, but this time I didn't get the ordering right and it was only ok.

And on the soon to come list, there is a Simple Greek cafe opening soon at 1731 Wilson in Rosslyn. Kind of a Chipotle-like operation, order the protein, then the rice or lentils, add options and you are good to go. Looks interesting, sign is in the window but not open yet.

I have been back to Arlington Kabob several times the past couple months, their lamb kabob is a bit pricey but you get a ton of delicious lamb and the chickpeas are outstanding as well! I also tried the lamb stew and though the portion size is a bit smaller it is a great lunch at a phenomenal price.

Sorry about the rambling format, but I hope some of you see something that is worth trying! 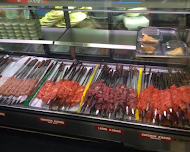