Nobu in Malibu remains a spectacular seaside venue. We have dined there weekly since they opened a the little mini-mall in Malibu years ago. The move to Larry Ellison's spectacular restaurant venue caught us a bit off guard as the intimacy of the mini-mall location was a real draw. Initially there was little culinary change in the new setting. There was a MAJOR attitude and customer service downturn however. Manager Erica who was always right on top of things seemed to be overwhelmed by the success and massive diner volume of the new venue. Over the last few months she is seldom seen. Instead, receptionists could care less about clients. More important, we have watched prices rise steadily over the past two years to the point where those at nearby tables could be heard complaining. This must have had an impact. With prices as high as they could possible go, instead of further price increases which clearly were impacting things. portion sizes began to decrease. The sushimi salad which used to be loaded with high quality portions enough to feed 4-6 hungry diners was downsized to the point where 2 people do not find the portions adequate. We were charged $3 for a request of extra teriyaka sauce for the dry chicken skewers we were served. The food (and sauces) remain the highest quality. The attitude, prices and small portions are taking their toll. We suggest you be prepared for an excellent, innovative but unreasonably small portioned meal at a huge cost. We are major foodies and do not complain about prices. But there comes a point. The combo of increased prices and smaller and smaller portions each time we go may lead us back into the Santa Monica mountains and to Katsuya which has alays been a close second. 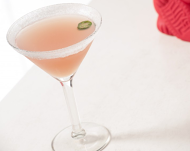 How to Make Dduk Guk (Korean Rice Cake Soup)
(07:01)
Video from CHOW-TO
Follow
In this episode of Chow-To, Guillermo visits Sarah Lee, founder of Kimbap Lab, and expert in Korean home cooking, to learn how to make Dduk Guk, a rice cake soup traditionally eaten to celebrate the Lunar New Year in Korea. This is a perfect winter soup beyond the holiday. Loaded with soft pillowy rice cakes, delicious garnishes, and a rich beef broth, this is comfort in a bowl.

by Jen Wheeler | Move over, Russell Stover. For choosy chocolate lovers, common candies just won't do. If your girlfriend...

by Amy Schulman | Valentine’s Day is replete with plenty of bouquets of roses and heart-shaped boxes filled with truffles...

by Megan Meadows | The noms are in. The snubs have happened. Love it or hate it, it’s time to start planning what to...

by Amy Sowder | There’s one team that everyone roots for, whether your eyes are glued to the game or you’re more focused...

Need help in curating a list for eleven nights in Paris

The Cutest Valentine's Day Gifts for Under $25

The Best Valentine's Day Gifts For Him on Amazon

The Best Valentine's Day Gifts for Her on Amazon