Take me to my post
Restaurants & Bars
Nashville Trip Report

Last Labor Day Weekend, I took a trip down to the [what I found out to be] land of Bachlorette parties.

The city itself isn't exactly picturesque, but does have its charms. The world of food media typically only mentions, not including the haute dining scene:

Now, of course I went to them, when in Rome:

Martin's (which had wonderful wings in Alabama white sauce), pretty flavorless pulled pork, and solid dry rub ribs. The sides were pretty unimpressive as I recall.

The Meat & Three's are for sure an institution, and many delicious, cheap, filling options to be had. The sides here are usually knock-out like their candied yams, or candied apples, or okra, or hushpuppies, or fresh cornbread. The meats can be hit or miss. Meatloaf is often a big favorite.. I went for beef tips which were so-so at Swett's.

Hot Chicken surely is the buzz-word and perhaps a bit over-hyped. The seasoning is good at Bolton's on their dry hot, don't get me wrong. The long lines just lead these places to be a bit too food travel-destination oriented.

At last, the place I truly felt most at home was Nolensville Pike, sometimes called Nolensville Road. A few miles south of Downtown proper, I took an Uber and walked several miles along the highway, with the plan to eat at as many gas station taco trucks I could (which there are plenty).

I started at La Fondita for 1 carnitas, 1 al pastor. It was a solid truck, don't get me wrong, but nothing particularly special - 6/10. An interesting observation is that all of the trucks I visited offer carrots with the tacos.

Just past La Fondita, there's a great Oaxacan ice cream spot and paleteria, La Colmena, offering a selection of nieves. I went for the traditional tuna and leche combination. It was a bit sweeter than I've had in the past, but extremely creamy and delicious.

I recommend La Colmena place over the more popular LA MICHOACANA PREMIUM #1, found in a plaza further up the road, which I later visited for a mangonada. As this was a particularly hot day, there was even a rival food truck in the La Michoacana parking lot selling diablitos, dorilocos, mangonadas, and the similar suspects as well, called La Cascada de Maty.)

However, just bit past La Fondita, further up the road going south on Nolensville, on a side street on the left, Whitsett, I believe, there was an unnamed taco truck. Going with a barbocoa taco and a lengua, these were perfect 10's on the scale.

It was so good, as I walked away, I saw two girls walking past me and I almost wanted to tell them to go there right now - or how good that place is.

They were so good that I decided I couldn't do better and cancelled the taco quest (walking by Carniceria Y Taqueria Don Juan, Tacontento, and several others). I later returned to Taqueria El Dollar, which is good but about a 7 on the scale.

Nashville is home to quite a large Kurdish population, a sizeable Salvadoran population, as well as various other ethnicities, but you wouldn't know it from Downtown/Midtown/Broadway since all the stores on Nolensville Pike.

Pupuseria Reina La Bendicion has incredible fluffy, pillowy, heavenly pupusas. Perhaps the best I've had, with a really rich tomato salsa roja, and a housemade green sauce to pair. Normally pupusas are a lot thinner, I find, which I hear is the norm in El Salvador as a means of preserving resources.

Plaza Mariachi is a recently built mall and food court for the Latin American population in Nashville, and is a really beautifully designed space. The food options didn't pique my interest, but it was really cool to wander around, and there was even live music.

Best Bites of Nashville in a long 4 day weekend:

Barbocoa tacos at unnamed taco truck on South side of Nolansville Pike Whitsett Rd or Joyner or another st very closeby.

Breakfast brunch at Monell's in Germantown

A Bite-Size Stop in Nashville, Tennessee 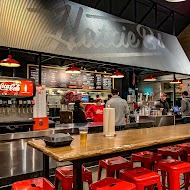 What are you baking these days? September 2021 Edition

Updated 11 minutes ago 221 comments
Baking What Are You Baking? Fall
5