Eater Boston reports that Mario Batali's Babbo Pizzeria e Enoteca -- which looks like an outlet of his Otto concept, presumably renamed because we already have several outlets of the Portland, ME-based pizza chain of the same name -- will open in early March on Fan Pier in the Seaport. 8700 square feet (!), wood-fired pizzas, pasta, gelato, and three bars: drinking, antipasti, pizza.

If it is indeed a relabeled Batali Otto, that's good news; I've found it to be among the more enjoyable and sensibly-priced of his NYC concepts (good wine bar, too). But I imagine Pastoral isn't happy about it. 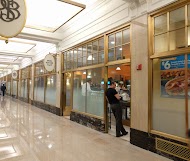