I was in San Francisco this week for WWDC (Apple's Worldwide Developers Conference). I found out a few months ago I'd be able to attend, so of course, I made a list and asked for advice beforehand. Now that I'm here, I plan on posting a report as quickly as possible for each day, to stave off procrastination. My report for "San Francisco: Day Five" (Thursday, June 5, 2014) is as follows:

As I approached late afternoon on Day Five, I thought to myself that this was going to be an easy post to write. I really only anticipated having to report on two places, but as it turned out, this ended up being a pretty full day, but before I get ahead of myself, let's rewind to lunch at a place I failed to try the previous day, as it's closed on Wednesdays...

I had heard about the wonton noodles, roasted duck legs, and pig kidneys, and I was interested. Also, it was very convenient to go between Moscone and the Tenderloin, and I had a limited amount of time for lunch that day as I had sessions I wanted to attend in the afternoon. I read I needed to order their duck leg noodles but had also gotten a tip to order the noodles "mee pok" style, and I think I conflated the two and confused the waitress. What I ended up with was a bowl of thick, yellow wonton skin noodles, a roasted duck leg, and some pieces of pig kidneys. The broth came on the side.

I like my noodles al dente, but these were a little on the hard side. They were fully cooked but cold. I'm thinking the noodles may not always be cooked to order, but perhaps to keep up with the lunch rush, they may be cooked in a large batch, cooled, then portioned out to bowls that will have hot soup poured on them. I ended up dumping the broth on the side into the bowl, which soften them up just enough. The duck leg was cold too, just okay in taste, but nothing to write home about. The kidneys were clean, pretty delicate tasting when not stir-fried with ginger and sesame oil (the way I usually consume it). So, I didn't love what I had, but I think I may have just ordered wrong.

After attending the afternoon sessions I wanted, I made another excursion to the Mission. Since it was my last full day in SF, and I wasn't sure how much time I'd have on Friday to go places, I wanted to make sure I got to try Humphry Slocombe. On my way there, walking from the bus stop, I passed by a place with an interesting name...

What pulled me in was a clapboard promising house-made sausages. I looked at the interesting menu, drawn, of course, to the beef tongue dishes they had, but then something else caught my attention: Poutine! I spent several formative years of my life in Montreal, and so I got to love poutine (and smoked meat, but that's another topic). I figured I'd try it out here, and it was mostly a success.

First thing I noticed was that they did use cheese curds, but either the gravy and/or fries were too hot, or the curds were not quite authentic, as they were nearly completely melted, while the poutine curds in Montreal have a fairly high melting point. But the important thing was that they tasted like curds, and not shredded cheddar or mozarrella cheese. The gravy was excellent, with the crumbled sausage adding a nice kick. I probably could have done without the relish they had mixed in, but it was fine. I was definitely pleasantly surprised by this take on poutine.

A half block later, and I was at my destination. I lost count on how many people told me to come here, both ones who've been and ones who wanted me to report back whether it's as good as they've heard. I sampled a few flavors, including several sorbets that were excellent, but I had to get the Secret Breakfast, a heady concoction of bourbon ice cream and cork flakes. It sounds quirky, but the combination really worked! For one thing, I love rum raisin ice cream, but I'm always eating around the raisins, and though bourbon and rum aren't the same, they taste pretty close in ice cream. The corn flakes were great too, giving some of that chewy-crunchiness like you get from the cereal after it's soaked up some milk in the bowl. This was probably my favorite scoop of my trip!

Since it was the night before the last day of the conference, Apple throws a "Bash" with free food and drinks and a musical act. This year it was Bastille. The band was fun, the crowd energetic, but the food was as one would expect trying to feed thousands of people at once, just alright. I left the bash around 9 PM and had to make a decision: Do I go back to the hotel and rest (and work on my posts), or do I go out and try to hit one or two more spots? Of course I chose the latter, so I headed out to Lower Haight to try the recently reopened...

The company just this week opened a shop in Santa Monica, my neck of the woods, but I figure I'd try it in Bay Area. I got a Single with Lemon Cookie and Chocolate Orange Confetti (I love shops that let you get two flavors with a single-sized portion). I thought the former flavor was good, but I really liked the latter. It reminded me of those chocolate oranges that you had to hit on a hard surface to break the "orange segments" apart.

It was getting late, but I decided to squeeze in one more place on my last night in SF...

This was on my mental list of late-night options, as they serve food until 1 AM every night. When I arrived after 11 PM, I was surprised to find the place was still hopping. The hostess mentioned that a show had just gotten out at a club in the vicinity. Since I was solo, I tried for a few minutes to unsuccessfully get a seat at the bar or communal table, but then I noticed a few seats at a counter right by the kitchen, and I managed to grab one, right next to the expeditor. It was great watching him organize tickets and calling out orders, and the chefs cooking and plating everyone's food, including mine:

Apricot, Honey Yogurt, Sea Salt: This amuse-bouche was a nice little bite. The apricot was fresh and sweet, the yogurt was tart and light, and the sea salt helped highlight the flavors in both.

Little Fried Fish: These whole battered and fried anchovies were great. The batter light and crisp, and the fish were decently sized very tasty. The surprise was the Romesco. I've had the sauce before, but here I could really taste the almonds, and they weren't ground into paste, so the texture of the sauce was pleasantly varied, rather than uniform.

Piggy Platter: This plate of assorted porcine parts in an array of preparations was quite impressive. It had some beautifully smoked pork tenderloin that tasted of ham, but with a delicate texture and without the high salt content. It also had some cubes of trotter fritters, made with pigs feet and carrots, that were surprisingly light. Then there was the unctuous mousse made of pig livers and hearts and other bits. Finally, the headcheese, a gorgeous terrine of cheek and jowl and tongue and fat that melted in your mouth. The accompaniments were simple--toasted bread, quartered strawberry, whole-grain mustard, and frisée--that went great with all the piggy parts.

I was really glad to have gone to Nopa on my last night in town. Even in just the two dishes I ordered, I could tell that they really put great care into their food. Had I known about their porchetta night on Tuesdays, I would have rearranged my schedule to eat there that night, but I was perfectly happy with this late last dinner in SF. 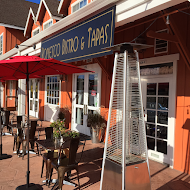