We hit the truck on a Wednesday, the day I usually go, when it is parked outside Cognoscenti Coffee on Washington Blvd. in Culver City from 10ish to 2ish or until they sell out. (On Thursdays/Fridays they are in front of Blacktop Coffee, and on Saturdays/Sundays they serve outside Blue Bottle Coffee; both in the Arts District in Downtown Los Angeles.) If I recall correctly, on that day the truck was actually parked around the corner from Cognoscenti Coffee, on Roberts Ave, for some reason. The menu consisted of three different tacos, a tostada, and a torta. We opted to sample each taco and the tostada.

Crunchy Sweet Potato Taco, with Oaxacan cheese, leeks, almond chile, fried corn, parsley: We started with the vegetarian option. Now I'm not generally one for the crunchy tacos, but this was just so good! The tortilla had just the right amount of lightness and crispness, and the sweet potato tasted just bright yet earthy. Chef Wes uses the almond chile in at least one dish each menu, and it is surprisingly versatile!

Chorizo Taco, with pine nut chile , pickled onions, cilantro: I'm not sure if Wes makes his own chorizo or not, but it was quite good. The sausage was relatively mild, but the chile made up for it. Delicious, but I have to say it was overshadowed by some of the other dishes that day.

Duck Breast Taco, with Satsuma tangerines, pistachios, arbol chile, chives: What can you say? It's duck! I like my duck breasts a bit more on the rare side, but these were still sufficiently tender and had a nice sweetness that was accentuated by the citrus. Love the use of the nuts in many of the dishes, including this one.

"Kajiki" Blue Marlin Poke Tostada, with white miso, wasabi, raw tomatillo chile, furikake: I had had this on a previous occasion, and it was just fantastic. The marlin has that fatty, melt-in-your-mouth flavor of hamachi (yellowtail) but with a firmer texture that makes it great for poke. This one definitely had more of a kick than the traditional Hawaiian dish.

I asked my sister which of the items we had she liked the best, and if I recall correctly I believe it was a tie between the tostada, which would have been my bet going in, and the potato taco, which was the dark horse. It just goes to show how deft chef Wes Avila is with vegetables!

Guerrilla Tacos turned out to be one of my sister's favorite places, of the ones I took her to while she was in L.A. It is definitely one of my favorites, and I always look forward to see what dishes are coming to Cognoscenti Coffee on Wednesdays. I've even tried starting a hashtag, #TacoWESday, for when Guerrilla Tacos comes to visit the Westside, but it hasn't quite picked up yet...

But we're not done yet! As promised, in addition to my sister's visit above, here are just a few more of the tacos, tostadas, tortas, and even a "stew" that I've had in the past six months:

Alright, I'll stop now. This is making me hungry. Looking forward to the next #TacoWESday! Also, someday I will make it to one of their DTLA locations; apparently, chef Wes Avila whips up a mean waffle with fresh fruits on Sundays!

What's the Difference Between Fajitas and Tacos? 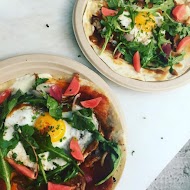 by Daphne Chen | Calling all seafood lovers! Whether or not you observe Lent, you'll want to try these delicious fried...

This Pineapple Upside-Down Cake Comes with a Poignant Story

by Amy Schulman | In the many decades that journalist and activist Toni Tipton-Martin watched the media cover African...