Just got back from Oahu after our first trip to Aulani. We didn't eat out much as my wife's relatives had us over for dinner the first night and the amount of leftover food was so huge that it lasted through our final day. We hadn't been back to Oahu in 6 years, so it was fun to go back to old stops.

Aulani: we really didn't eat here. It would have been fun to try 'Ama'Ama but we ran out of time.

Makahiki character breakfast: the food selection was overall fine for a buffet, and you really are doing this more for the character dining anyway. The fresh fruit selection was good (regular plus li hing mui pineapple, melon, papaya, dragonfruit, strawberries - our son particularly liked the banana half decorated as a dolphin popping out of a pail of blueberries). Typical buffet food (eggs, bacon, sausage, waffles) plus an omelette station. The fish was ok, didn't try the miso soup, fried rice and corned beef hash were good.

Mama's Snack Stop: the coconut shrimp was good as was the side of chili. The hot dog on a hawaiian roll was ok but not something to seek out like the corn dogs at Disneyland.

Ulu Cafe: that is where the dole whip is located now instead of the Lava Shack. I only went there for the coffee/drinks in the refillable mug. Best place to get the refills are the drink station by 'Ama'Ama as few people know where that is - does not run out of ice.

Monkeypod: we made it here for happy hour for a light meal. We'd been to the one in Maui. The lobster deviled eggs were creamy bites. We liked the chicken wings with the dill tzatziki dipping sauce previously and got them again, it is an interesting but pleasant pairing. The "dim sum" shrimp/mushroom potstickers were also good bites.

Roy's: we made it here for happy hour for a light meal as well. It was pretty empty as it is a bit farther of a walk (or drive, we are Southern Californians) than going to Monkeypod from Aulani. We liked their aloha menu better though. The baby ribs were tasty and fell off the bones, and we preferred the chili wings here although they are different. The dragon maki was good combination of flavors (cream cheese!) and crunch. Nigiri sushi and the spring rolls were both fine. The one thing about Roy's is that they use more sauces which tend to be a bit heavier (hoisin for example).

En Fuego: Google Maps has an incorrect location for them. They are not at the bus stop, they are in the Kapolei Marketplace with Safeway. My wife liked her seared ahi was good - lightly seared. Salad was standard greens. I got the combo plate of shrimp scampi and garlic chicken. The three pieces of chicken had a nice crisp crunch to it, garlic sauce was pretty light. The shrimp scampi was a small portion but the cream sauce is pretty heavy and filling. I really liked their kalua pig and cabbage spring rolls, nice combination. Our son inhaled his. We'd go back.

Foodland: Went to the deli counter. Poke here is pretty good if you don't have time to go farther.

Tanioka's: stopped by for snacks. It is a bit inconspicuous but a worthwhile stop. I really liked the tako poke, the spicy ahi poke was also good as well. Our son usually only likes eating spam, but ate the whole spam musubi, another sign of tastiness.

Leonard's Food Truck: the good: warm malasadas. the not so good: not totally heated all the way through. Still best to go to Leonard's if you are over there, but this was ok.

Laniakea cafe: This is inside the Pacific Aviation Museum. If you take the tour of historic sites at Ford Island, this is the stop after the Missouri. You don't need to pay for admission although we enjoyed the Pacific Aviation Museum. Has a full service restaurant and is air conditioned which was pretty key. We were just there for a break, but the garlic fries and edamame and beer were good.

Liliha Bakery on Nimitz: This is not the original, but is larger and more convenient from Costco. Went to the takeout bakery to get "coco puffs" which has chantilly on top and the chocolate filling in the middle. This was worth the stop!

Pig and the Lady: We barely made this but it was worth it. The french dip banh mi was great. The crunchy baguette went well with the beef and hoisin sauce and the cilantro and onions. Great sandwich. My wife got the P&L pho which was large and up to her standards as a Westminster/Garden Grove native. The broths for the P&L, pho broth, and the keiki chicken pho were all different but tasty. Our son hadn't had pho before but his pho disappeared quickly and I had to add mini noodles to the pho broth that came with the french dip banh mi for him to eat.

Nico's at Pier 38: last time I was here was when it was still a takeout counter. The food is still as good as I remember. Got the catch of the day which was mahi mahi in a watercress/shittake mushroom sauce, while my wife got the poisson cru which was the Polynesian version of poke with coconut milk and lime. We had a late lunch at Pig and the Lady, so were still full, but glad we made it. 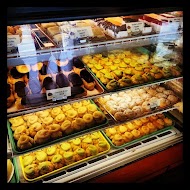