What Is White Barbecue Sauce?

Alabama has a different (and delicious) way of doing BBQ.

As in American politics, American barbecue sauce is largely a two-party system. On the right, you have the grand old Kansas City-style tomato and molasses camp. On the left, the bleeding heart vinegar and mustard styles of Memphis and the Carolinas. As in politics, loyalties are divided; strong opinions are often held that can prompt spirited debate, or at its worst tear otherwise peaceful, barbecue-loving families apart. But, as is also the case in politics, there are other, independent parties eager to throw their hats into the arena and compete for the devotion of even a fraction of the American public. With this parable, I give you: white barbecue sauce.

Regional RenditionsA Guide to BBQ Sauce Across the U.S.Without the saturated crimson or deep golden hues of most barbecue sauces, it may sound like a haunted variant that was forged North of the Wall, or at least, like, in Minnesota. In truth, a look at the American barbecue map shows that white sauce hails right from the heart of it all, with its origin in Decatur, Alabama. Robert Gibson of Big Bob Gibson’s BBQ is credited as the first to develop a creamy, tangy, “white” sauce with which to mop, or “baptize,” freshly smoked chickens.

“I often refer to Alabama white sauce as the next generation ranch,” says Jean-Paul Bourgeois, Executive Chef of Blue Smoke, a popular barbecue restaurant in New York City that pays homage to various regional barbecue styles. “I use it for everything. Not only smoked chickens, but a base to make new sauces, to salad dressings, and all the way to pork and wild game. It’s just that good.”

My 2nd Alabama recipe in my American Eats series is Alabama White BBQ Sauce! Guys, this stuff is crazy good on grilled chicken even if it seems totally weird slathering white sauce instead of red sauce all over those perfectly grilled bone-in chicken breasts. Add some corn on the cob, a tomato pie, and some fresh squeezed lemonade, and boom – that is one incredible summertime dinner that tastes of Alabama and the South. Try it, you won’t be disappointed! I promise! • Link in profile —> @houseofnasheats https://houseofnasheats.com/alabama-white-bbq-sauce/. • #alabamafood #alabama #southernfood #southerncooking #americaneats #summereats #grillingseason #bbqchicken #bbqlovers #bbqlife #grillmaster #cookouts #homecookin #homecookingisthebest #chickenbreast #barbecuesauce #barbecuechicken

So, what actually is this mysterious, pallid concoction capable of permeating yardbirds—that’s chickens to you Yanks—with a distinct tang and leaving a rich, alluring glaze on the skin? Big Bob Gibson’s recipe is rightfully kept secret, but according to available tribute recipes that claim to mimic its distinct texture and tang, the stars of the white sauce show are mayonnaise and cider vinegar, with supporting castmates in the form of horseradish and cayenne.

While white sauce has fixed roots in the south, its champions can be found wherever barbecue is enjoyed, as is evidenced by its appearance on a barbecue menu as far north and as far culture-wise from barbecue country as the Big Apple. “Alabama white sauce is smooth and creamy with tang right where you need it. Throughout the palate, it is layered in umami,” suggests Bourgeois, who also adds a few special ingredients to his take on white sauce. “White miso used in Blue Smoke’s Alabama White Sauce lends umami bombs and layers of salt, while Creole mustard adds a punchiness in the nostrils and zing to balance the richness. If a dish needs more roundness of salt and richness then I use Alabama white sauce.”

Echoing Chef Bourgeois’ sentiments, one retailer of white barbecue sauce goes so far as to call it “Anything Sauce.” 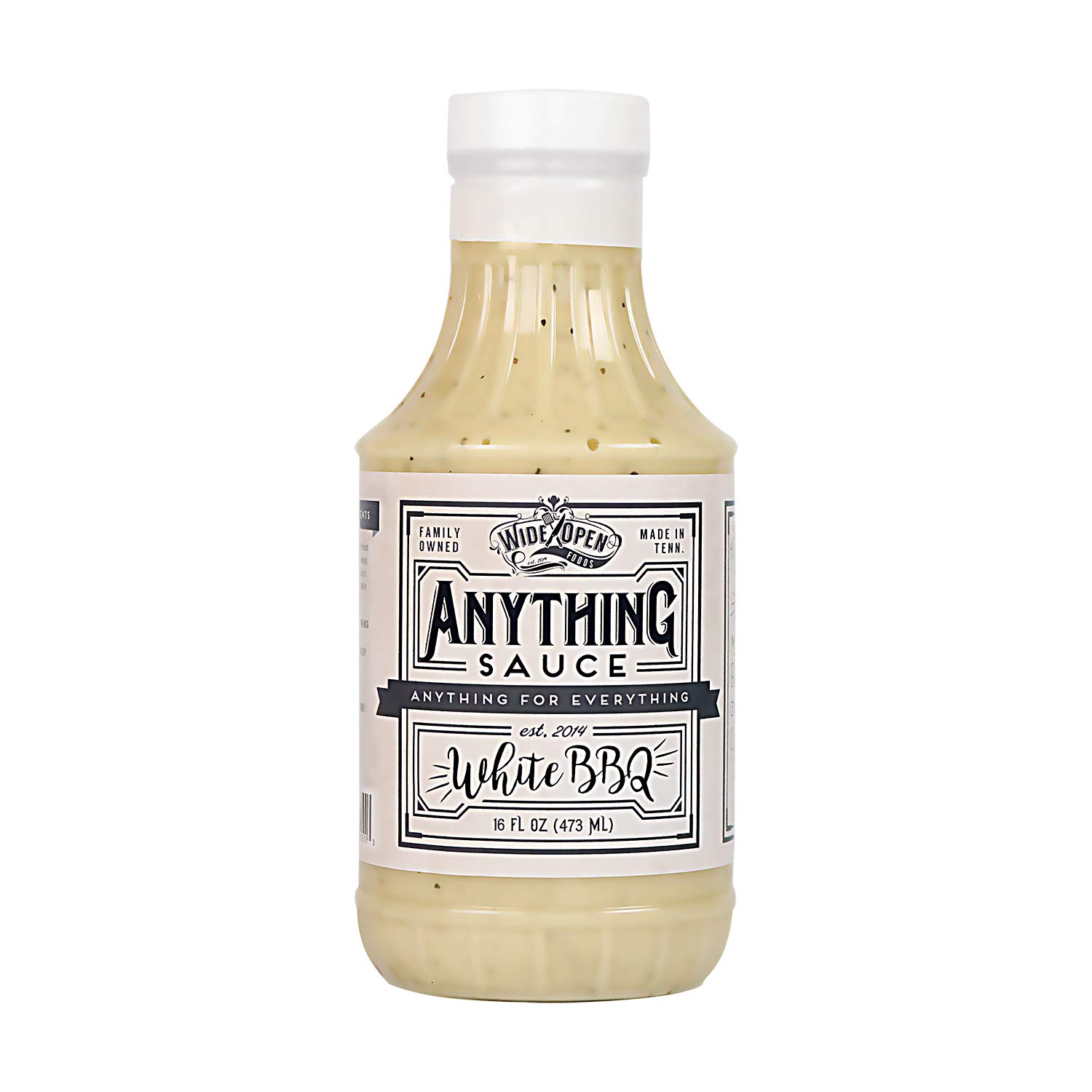 Put this on anything and everything.

If white sauce still seems a bit far out of your barbecue paradigm, Bourgeois offers encouragement: “Barbecue, like the sauces, is all about one’s personal palate which is oftentimes directly associated with a  sense of nostalgia. If you are from Kansas City, the likelihood of you preferring Alabama white sauce over a sweet tomato-based sauce is slim. Luckily for me, I have little ties to any particular barbecue region so everything is on the table. For me, each sauce has as a place on the menu.”

Intrigued? Think white sauce is just the third-party candidate to sway your barbecue vote? Blue Smoke in New York and Lillie’s Q in Chicago both have it on offer, as do numerous barbecue joints throughout the south, or you can purchase white sauce for home use by retailers from TGI Fridays to Sur La Table—or whip up your own Alabama white BBQ sauce recipe.

Yet another one to try.

As for me, if anyone needs me for the rest of the day, this New Yorker will definitely be at Blue Smoke up to her eyeballs in umami bombs.

Read More: Everything You Need to Know About BBQ & Grilling

Pamela Vachon is a freelance writer based in Astoria, NY whose work has also appeared on CNET, Cheese Professor, Alcohol Professor, and Diced. She is also a certified sommelier, voiceover artist, and an avid lover of all things pickled or fermented.
See more articles
Load Comments