Artisanal Matzo: It’s Worth the Investment

Matzo may not always be the most delicious thing on the Passover table (except when it’s made into matzo crack), but artisanal matzo is actually incredible all by itself.

When it comes to Jewish Passover food, there’s a lot to look forward to: tender slices of brisket dripping with savory gravy, fluffy matzo balls floating in a shimmering golden chicken broth, sweet charoset (a mixture of chopped nuts, apples, wine, cinnamon, and sugar, meant to symbolize the bricks and mortar Jewish slaves in Egypt used to build). But rarely does anyone wax poetic about eating matzo. Why? Because it’s about as delectable to consume as a mouthful of paste.

The matzo most of us grew up with is pale, thin, square, brittle, tasteless, and mass-produced by companies like Streit’s and Manischewitz. I can barely choke it down on its own without a swallowful of something liquid—usually water, preferably wine. But, thankfully, there’s a new generation of matzo makers who are working to change this. They lovingly shape and bake it by hand using premium ingredients, turning this boring Jewish holiday staple into a craveworthy snack. In true Passover fashion, I invite you to sit back, relax, and enjoy something we’ve all been missing at our seders: artisanal matzo. 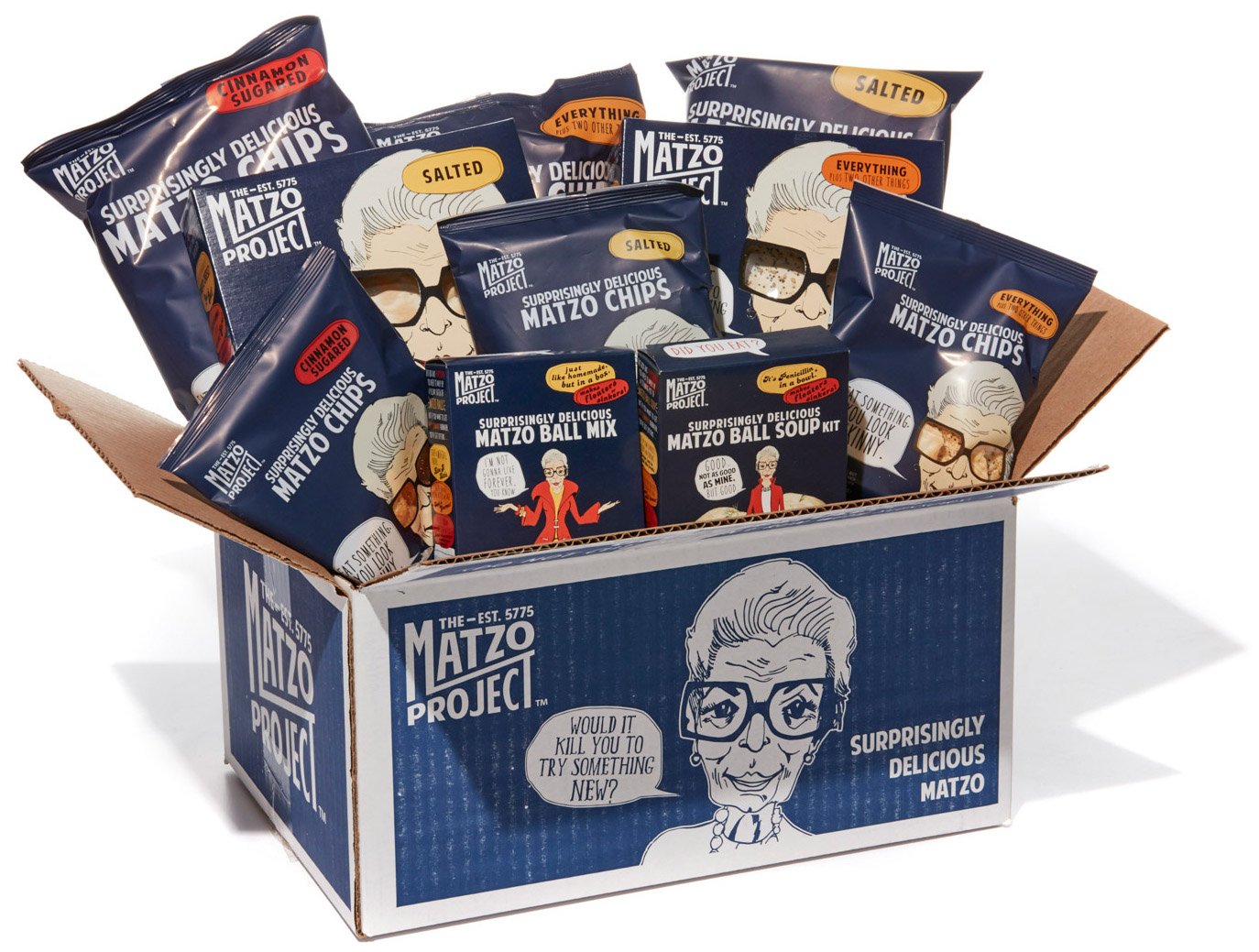 The Matzo Project The Whole Megillah Box, $47.49 on Amazon

Sample a range of products and flavors from The Matzo Project!

Not Your Momma’s Matzo Makers

“We just wanted matzo that tasted good,” says Dianna Dar, co-founder of Cult Crackers in Berkeley, California. “Most matzo tastes like cardboard. Our cracker is crispy, seedy, a little salty, has a lot of nice flavor, and has got a very satisfying crunch to it.” Handmade in small batches with organic sunflower, sesame, chia, pumpkin, hemp, and flax seeds, cassava flour, Himalayan salt, and coconut oil, the result is a gluten-free matzo that is gloriously interesting.

What began as a side project for friends and family turned into a seasonal product Cult Crackers now sells at the farmers’ market, in Bay area stores, and online. In addition to its traditional use, Dar recommends eating artisanal matzo like you would any tasty cracker—topped with hummus, goat cheese and lox, or crumbled on top of soup, salad, or even omelettes. Dar’s co-founder Birgitta Durell, true to her Swedish roots, enjoys eating it with pickled herring.

Across the continent in Middletown Springs, Vermont, Naga Bakehouse produces its own artisanal Passover specialty, Vermatzah. According to co-owner Julie Sperling, it’s a seasonal family affair; she, her husband Doug Freilich, and their two children have been making and selling Vermatzah since 2009. “Each one is shaped, weighed, measured, baked and packed by us,” she explains. Like everything they bake, their round matzo is handmade in small batches with local ingredients and cooked in a wood-fired oven.

Sperling and Freilich came up with the idea to bake their own matzo when they were looking to diversify their product line, which led to questions about who they are and where they came from. “It was a return to tradition, the simplicity of how it had been made before,” she says. “When we began to look into it, we realized that 5,000 years ago, matzo was made in small batches. It wasn’t until the 1800s that it was machine-made and square.” Sterling points out that while their product isn’t kosher for Passover, it’s eco-kosher, a term that dates back to the 1970s and roughly translates to “good practice.”

While most artisanal matzo makers only sell limited quantities for Passover, The Matzo Project in Brooklyn keeps its customers snacking year-round. “In the end, matzo is a good, crispy, neutral cracker,” says co-founder Ashley Albert. “We’re looking at it as more of a rye bread, something that could be part of the cracker lexicon.” As an all natural, kosher, vegan, nut-free, and sugar-free product that comes in flavors like cinnamon sugar, everything plus two other things, and the soon-to-be-released harissa flavor (“It’s like a fancy Dorito!” Albert exclaims), this matzo has universal appeal.

Albert also designed the attention-grabbing packaging, which features a Jewish grandma wearing a huge pair of sunglasses asking, “Would it kill you to try something new?” It not only tickles customers’ funny bones, but also gets them to relate. “Everyone sees their own grandmother,” she explains. “There’s an archetype of a sassy, smart, funny older woman you rarely see in pop culture that’s represented in our marketing.” This translates to how The Matzo Project sells its products. “It’s for everyone,” Albert asserts, “it’s not just for Jewish people.”

Making the Most of Artisanal Matzo

Like anything that’s made by hand in small batches, artisanal matzo will cost you more than you’re used to spending for the regular stuff—it can sometimes go for upwards of $10 a box. But you may find it’s worth paying more for something that’s tastier, fresher, and more thoughtfully sourced.

While it can be topped with, dipped into or crumbled over practically anything, it’s also worth experimenting with using it to make matzo brie, kugel, stuffing, and even pie crust. Here are a few of our favorite recipes to help you make the most of your matzo, artisanal or not.

What better way is there to showcase a high-quality specialty matzo than by smothering it in chocolate to make it that much more extra? With just seven ingredients (and a little imagination), you can turn this Passover staple into a sweet treat worth gifting to friends and family. Get our Matzo Brittle recipe.

hey! bake your matzo brei! add za’atar and cheddar, top with harissa and herbs. and lemon and sumac! recipe is on the blog. 🤗🍳🚚📜🚫🍞🌿🍋❤️#passover

Food Network star Molly Yeh’s take on this classic dish is, unsurprisingly, a winner. She combines broken up matzo with cheese, spinach, cream, eggs, fresh herbs, and spices to create a frittata-like oven-baked savory meal that will incentivize you to keep a box of matzo in the pantry year-round. Get the Spinach and White Cheddar Baked Matzo Brie recipe.

Matzo Granola with Apricots and Pistachios

While matzo brie is a classic eggy option for brunch, this version of granola may become your favorite way to start the day. It replaces oats with matzo crumbles, which you can either break up yourself or buy pre-made as matzo farfel, mixed with honey, maple syrup, ginger, cinnamon, apricots, golden raisins, and pistachios. Get our Matzo Granola with Apricots and Pistachios recipe.

I don’t want anyone to panic, but @Bubbys is serving a Three Berry Pie WITH A CRUST MADE FROM @MatzoProject MATZO!!!!!!!!!!

According to Ashley Albert, Bubby’s of New York City has been known to use The Matzo Project’s artisanal matzo in the crust of its dynamite triple-berry pie. Try making your own with this version from Martha Stewart, which combines finely ground matzo with salt, sugar, water, and coconut oil. It works particularly well for any pie that calls for a graham cracker crust. Get the Sweet Matzo Pie Crust recipe.

Every year, the James Beard Foundation hosts a Passover seder in collaboration with some of the nation’s most celebrated chefs. This particular recipe—a family favorite of the foundation’s chief financial and operations officer, Marilyn Platzer—is earthy and filling, flavored with chicken broth and mushrooms. It makes a great side dish for roast chicken, or even a Thanksgiving turkey. Get the The Chanin-Platzer Family’s Matzo Stuffing recipe.