Everything You Need to Know About Steak Tartare

Beef, in the raw.

Steak tartare. Or beef tartare. One of those classic preparations that seem to be constantly falling in and out of vogue. Off-putting to some and a coveted delicacy for others, the dish retains a certain mystery and charm for being wholly unique, simple, yet still somewhat difficult to execute and undeniably French. Or is it? And what exactly is beef tartare (or steak tartare) anyway?

What Is Steak Tartare?

Simply put, steak tartare is a dish of finely chopped beef, served raw and mixed with any number of accompaniments but most commonly egg yolk, Worcestershire sauce, Dijon mustard, hot sauce, fresh herbs, and other seasonings. It’s often served with bread or toast of some kind, and though it can stand alone as a main course, is often positioned on restaurant menus as an appetizer. Any meat, fish, or even vegetable can be served “tartare” style but for the purposes of this article, we’ll focus on the original. Beef.

A Brief History of Steak Tartare

Born of necessity, tartare is said to have originated in the “Tartary” region of Northern Asia (between modern-day India and Russia), as a quick and easy way for Mongolian and Turkish horsemen to make their not-so-fresh raw meat edible. Legend has it that the men would ride with flanks of raw beef, horse, and camel tucked under their saddles to tenderize it before giving it a fine chop or grind and mixing it with eggs and milk to soften the undoubtedly terrible taste.

It wasn’t until the 20th century in the upscale hotels of Paris when the dish earned a more elite mark, and despite its Asian roots, has become as much a part of the French cooking lexicon as crème brûlée or coq au vin. Nowadays, you’ll find the dish, and variations of it, on menus in trendy eateries, classic French restaurants, and steakhouses alike. At New York’s Her Name Was Carmen, for instance, Chef Omar Ben-Hammou makes a steak tartare (seen below) with Dijon, shallots, chives, and olive oil, finished with a drizzle of lemon, puffed quinoa, and cured egg yolk flakes on top.

Tonight…this Steak Tartare is yours with its Cured Egg Yolk, Creme Fraiche, & Caviar. 🤤

The most important ingredient to consider is, of course, the beef. Because it’s being served raw there is absolutely no excuse or substitute for a less than excellent product. If you have a trusty local butcher, that would be a great place to start. Let them know you are making beef tartare and that you need their freshest cut of beef tenderloin. Because there is no cooking involved, tenderloin is the preferred cut—mostly free of gristle with a rich and even texture, and tender, of course. But a good sirloin would also suffice if no tenderloin can be had. From there be sure you have a fresh egg yolk for binding along with herbs and other seasonings of your choosing. Worcestershire sauce, hot sauce, and good Dijon mustard are popular figures in beef tartare, as are fresh parsley, fish sauce, capers, and minced shallot.

Another option is ButcherBox, which delivers grass-fed beef to your door.

Making beef or steak tartare is about as simple as you might think (no oven!), but the devil is truly in the details. For starters, try to chill or even par-freeze the beef before starting so it is nice and cold when served, and easier to dice and work with.

From there, mince the beef with a well-sharpened chef’s knife. In my opinion, the finer the chop the better it works in this dish, but there is an argument for a chunkier tartare, too. Chopping the beef by hand is the traditional method but a meat grinder or food processor will also do the trick. After that, gently mix the chopped beef in with the egg yolk and Worcestershire sauce, salt, and pepper, Dijon mustard, and herbs until evenly distributed. Finally, form the beef into a hockey puck-sized round using your hands for a rustic look or food mold, like the one below, for a more refined presentation, and serve immediately. 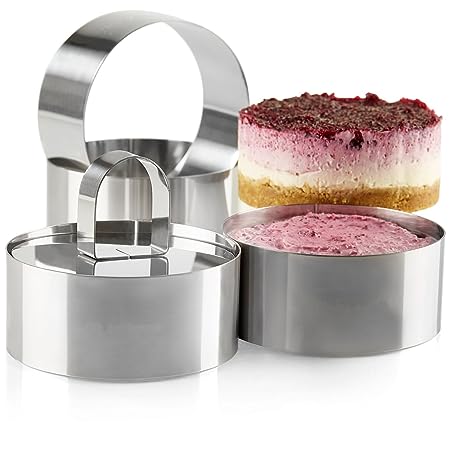 Effortless presentation for your next beef tartare!

For a more eye-catching (and classic) presentation, feel free to gently set the egg yolk atop the tartare and allow yourself or guests to mix it in manually with a small spoon.

How to Garnish Steak Tartare

The finished tartare can be served with toasted bread. Rye or French baguette are popular choices for toast, just be sure it’s something sturdy enough to hold a heaping scoop of beef tartare without folding. Capers, anchovies, or bright and salty cornichon pickles are good to cut through the rich beef and egg. The raw beef dish can also be served over a bed of greens or with a small side of french fries (frites).

Raw DataWhat Is the Difference Between Ceviche and Tartare?Safety Concerns

Because serving raw beef is a fairly uncommon practice people often want to know if it’s safe to eat. The short answer is, as long as you’re working with quality beef and you keep it refrigerated until serving, there is little cause for alarm when serving and eating beef or steak tartare. As with any raw food, there is a heightened possibility of foodborne illness so take a bit of extra precaution when selecting and preparing the beef for tartare.

Drinks to Pair with Steak Tartare

Because you might save this one for a dinner party or special event, it may be helpful to learn what wines and beers pair best with beef tartare.

Chowhound’s resident sommelier and general drinks nerd, Pamela Vachon, reminds that “steak tartare is still steak, after all, with added richness, so classic beef pairings with a little heft and grip still hold up, like a big Cabernet Sauvignon or a meaty Syrah. Or, if you like your tartare with a little extra spice, something with some sweetness like an off-dry Riesling gives a nice counterpoint to the heat.” And don’t worry if wine’s not your thing: “There’s always beer,” says Vachon. “An extremely rare burger (i.e. tartare) sometimes just begs for a crisp, refreshing pilsner or Kolsch.” Sufferfest, a newer brewery in San Francisco makes a dandy Kolsch called “Repeat” brewed with bee pollen that would do just the trick.

This recipe is as classic as it gets. The rich beef gets a salty umami tang from the anchovies and heat from a few dashes of Tabasco. As you already know, any good beef or steak tartare starts with good beef. From there you can tinker with the flavorings and accompaniments but keep in mind a balance of salt, umami, and bright herb is ideal for this dish. Get our Classic Steak Tartar recipe.