Washington DC on a budget. A review of several eateries in DC center.

Hello, I have been forced to live on USD 20 per hour after taxes and went to present research in Washington this week. I couldn't afford a hotel but found a wonderful rowhouse on 10 th st NW which suited my budget. I brought along a new girlfriend and we went to the following eateries:

1) Old Ebbitt Grill.
The half price discount on the Orca platter from 130 to 65 USD must be the deal of the week, right? You get an ENORMOUS amount of seafood, consisting of a lobster, 12 large peeled prawns, 12 crab claws and 2 dozen fresh oysters you yourself get to pick from 5 different varieties. What is there not to like? Well, oysters WERE delish, and we bought an extra dozen, sampling 5 different varieties! All wonderful and fresh. The rest then? Very filling, but I must confess, NO TASTE whatsoever! Why, oh why, can´t they boil them in something other than just plain water and a minuscule amount of salt? A la nage for example?

2) The Partisan. USD 290 including tax and tip for the Pig feast and a wine package for two? With two dishes "old" in spite of the restaurant having their own butcher????

3) El Sol. I didn't see no hordes of customers queuing, and neither should they. Mexican food. No twist. Nothing memorable. End of story.

4) Benito's place. A delightful honduran food hole in the wall and cheap to boot. Why is there then no taste? Nothing memorable.

5) I Ricchi. Thank GOD for the groupon coupon. Because of that-a decent affordable meal. At full price-a total ripoff

6) At las t- Espita mezcaleria: WONDERFUL USD 5 tacos at happy hour. Still expensive from our standards-but SO mouth-wateringly good. And kind service. And Thally's-mentioned in despatches because of the wonderfully personal and likeable bargirl.

All in all - I do NOT see how DC can be so lauded in her restaurant achievements. I have dined far better and less expensively in Philadelphia San Diego San Francisco and Austin. Just as good in Chicago and Salt lake city, better in Vancouver Atlanta and Montreal.

Dire chimes, but I really cannot say anything better. 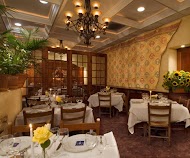