One final stop in Taos after checking out of Casa Benavides https://www.chowhound.com/post/casa-b... , I circled back to Tiwa Kitchen for lunch. I had spotted it on my early morning visit to the Pueblo, and I'll note that it is much closer to the entrance to the Pueblo than GPS directed when I returned.

I ordered the day's special, buffalo sausage on fry bread sandwich with green chiles and sauteed onions, mostly because I wanted something that I could take with me that would reheat easily later. Lean and on the dryish side, but deftly spiced, more in the Teutonic category than Mediterranean with allspice and cardamom subtle notes. And yes, those were great fries.

But if I'd not been time strapped, I would have ordered the rainbow trout. The night before at The Love Apple the server had explained that its trout came from Idaho because New Mexico does not allow the sale of wild caught trout. But here at Tiwa Kitchen on Indian lands, the native family that owns this place can catch wild trout from its own streams and serve it here. I regret not ordering it when I had the chance. My friends tried it a few days after my visit and report that the trout is indeed wonderful and also recommend the fruit turnovers. 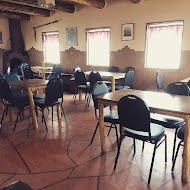