Last week I escaped the back up on northbound 101 by exiting in San Mateo. I thought I'd grab a bite to eat in the downtown core but could not find a place to park at 7pm --- worse than San Francisco! Then I thought I'd head over to a Peruvian place I"d noticed some months ago. I pulled up in front and then decided that the sign for Tacos al Vapor, actually the name of the restaurant and its specialty, was the more interesting bet.

The full name of the place is Tacos al Vapor Nueva Italia, after the town in Michoacan. It's open starting at breakfast. The place smelled really good when I stepped inside the door.

I ordered the namesake tacos al vapor at the counter. Complimentary chips, that were nothing special, were brought to my table with a caddy of salsas. The red and the green salsas both packed a lot of heat, but were fairly simple, the kind of thing to drizzle on tacos. The salsa de molcajete made with chunky roasted vegetables was excellent, and my favorite for eating with the chips.

My favorite was the salsa macha, a style that I've not seen often outside of the Michoacan places in Salinas. It's made with oil, dried chiles and has a natural sweetness from caramelized onions. I complimented my waitress on this, and she said she likes it best with pozole. She also suggested that I try it at home with some tortilla chips spread with mayonnaise then drizzled with salsa macha.

Tacos al vapor are offered with lengua or cabeza. I got one of each with everything and the upgrade to handmade tortillas. The tortillas were extremely tender and light. The meats were like butter and in need of a bit of salt. The essential softness from steaming was there though these are assembled to order. The plate was garnished with sliced radishes, wedge of lime, and white onion cured with salt and vinegar.

I ordered a jamaica with my meal. I wish I'd bought a champurrado to go to try the version here.

My pair of tacos with the tortilla upgrade, medium agua fresca, tax and tip came to less than $6 for a sit-down meal. Can't beat that.

Anyone else tried this place?

13 of the Best Mexican Recipes to Grill This Summer

What's the Difference Between Fajitas and Tacos? 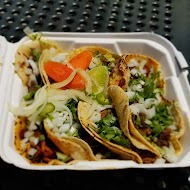