Take me to my post
Restaurants & Bars
Quebec (inc. Montreal)

Who Smokes their Smoked Meat

I always read and hear conflicting reports on this, whether on Chowhound, Montreal food blogs or speaking to actual owners of deli's that will just tell you, "yah yah we smoke it ourselves".

So who do we know with certainty that smokes their own product in house.

I think we all know with certainty that Schwartz smokes their own meat in house. Now how about the others?

Delibee's has told me that they smoke in house but then I've read conflicting reports online. 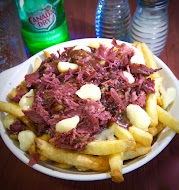