April Cookbook of the Month: Amá by Josef Centeno Discuss
+

Returning to a "never again" restaurant (in my case EMP)

EDIT: A moderator moved this post from the Manhattan board because the original version did not mention a specific restaurant (which is perfectly fair imo). I hestitate to name the place, but I'm now including it -- EMP -- because I'm genuinely curious whether I should return.

Some years ago, my now wife and I decided to celebrate our last day in NYC before we moved across the country, so we decided to have a blow-out meal. The food boards/bloggers were raving about Daniel Humm, who was turning around EMP. We managed to score reservations and were super-excited because the food looked amazing.

Unfortunately, what we experienced was the worst fine- (or really, any) dining experience in our entire lives. It was less that the service was bad, which happens, but that we were actively treated poorly while everyone else was coddled. Just one example: we opted for wine pairings with the menu (which were customized based on taste and price point), and the sommelier approached our table - but upon seeing us and how young we were, walked away without speaking to us and sent wines much less expensive than we were prepared to select. Meanwhile, through the evening, tables around us had in-depth discussions with the sommelier. The whole evening proceeded in this way. It was so categorically bad that I would remember new slights for weeks later.

I had vowed never to return again, but the restaurant has been accumulating accolades and from what I've heard/read about from others, ours was a rather anomalous experience. So I got a reservation, but I'm feeling quite ambivalent about returning. There are plenty of places that have been great to us, and it seems unfair not to return to those restaurants... but I would like to know what this place is like during a normal dinner.

For people who love EMP, would you return if you had an experience similar to mine? More generally, have any of you returned to "never again" place? Was it worth your time, or should I go somewhere else? 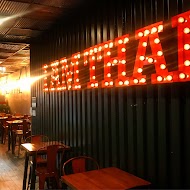 Sam I Am Bagels

by Susannah Chen | Spring asparagus is absolutely worthy of celebration, so we rounded up some of our best asparagus...

by Miki Kawasaki | Summer may seem like prime time for salads, but fresh spring produce also shines in simple preparations...

The Ultimate Guide to Picnicking

by Chowhound Editors | The picnic is one of the annual joys of warm-weather (and sometimes cool-weather) eating, and our...

Celebrate Spring with These Seasonal Cocktails

by Brittany Loggins | There’s no better way to shed your winter layers and ease into spring than with a delicious cocktail...

Birthday lunch in the bay area

Blue cheese differences? What is your favorite?