2A Am Heumarkt, Wien, Wien

Spent a couple of days in each of the above three cities.

Here's how I would rank our high-end meals, with a quick review :

Of the 200+ restaurants we've been to that are chowhound type places, I'd say this was in the top 5 (probably top 3).

A couple of days afterwards I turned to my wife randomly and asked her, "You know what I'm thinking about right now?" and without pause she replied, "the leek tempura at Mraz and Sohn" -- she was right.

Also, a really amazing cheese cart, among about 10 other things I could rave about.

A big step above Steirereck, for me.

We had a 6 course lunch here, but (I think unwisely) skipped the cheese course.

A lot of interesting ingredients with good execution. There were parts of a few dishes that were truly outstanding, and there's something to be said for the effort that they take with growing and procuring interesting produce.

Overall, I can't fault the experience and did enjoy it -- though the food wasn't mind-blowing for me. Of the 6 courses we had, I really liked 3 of them, and felt the other 3 could use some editing / adjustment.

I would opt for a 4 course menu, and get the cheese course if I were to go back.

(If you do go, make sure to check out the jams and vinegars on offer. We purchased a strawberry jam that is really phenomenal. )

A casual bistro by the team behind La Degustation in Prague; of the three dishes I tried, one was inedibly salty (mushrooms with egg yolk, kombu, shichimi). It was truly awful, and a real challenge to get through. But the idea was nice, and if it wasn't so salty it would have been a good dish.

The other two were outstanding for me. One was cauliflower with a black trumpet mushroom sauce -- really fantastic flavors, simple, but cooked and seasoned extremely well. As a vegetarian, I've had a lot of roasted cauliflower at high end restaurants, and this was probably the best.

For a restaurant with a rotating menu and simple dishes, I would excuse them for missing badly once in a while. That's just me though. I still really liked my meal.

(Probably a stylistic thing that this is 3rd on this list, I think my wife would rank it 5th.)

Really good cooking, but a definite step down from the top two restaurants on this list.

Definitely going for a Michelin type atmosphere and cooking, and succeeding in my opinion (did just get awarded their first star).

This was our last meal of the trip, so we were probably feeling some "Michelin-fatigue". It gets to a certain point I guess where you don't really see enough of the chef's point of view, and have dishes that could have been served in a dozen of the other restaurants you've visited in the last few months.

I can't fault the restaurant for that, but definitely something to consider.

A step above the restaurants below it on this list, but not a considerable one. I don't think there were any standout dishes for me.

Offers a 7 course for around 35eur. We had to settle for a 5 course (couldn't do 7 courses for vegetarian), but this was enough food.

Good preparations, modernist but not too much so -- really well executed individual components.

Overall, an enjoyable meal, didn't really feel too 'Hungarian' but I'm probably not the best judge of that. Similar in quality to a lot of 1* places we've been too.

I would probably opt for something else in Budapest given a short stay / limited number of meals, but it's definitely a really good value proposition for the quality of food.

Good, but not more. Too much going on; flavors that were competing instead of complementing.

Ordered a la carte, and 2 of the 4 dishes were quite good actually.
("Pumpkin, spicy butter, curd, black garlic") and a chocolate dessert with pickled currants. But again, those probably had one or two extra things on the plate that didn't need to be there really, IMO, or didn't integrate as well as you'd like.

I.e. they had a dish that was a beet gel with cheese, but had about 4 or 5 other things going on as well -- whereas we had a dish at Seta in Milan which just paired a beet jus (with a raspberry vinegar, maybe?) and burrata, and that really was phenomenal. Same general idea but more simple, focused, and exuberant flavors.

Definite pass for us. Not sure why there is hype or a Michelin star. Nothing stood out. Maybe an off night?

Eska
We visited for breakfast, and also got some sandwiches to take on our train ride to Vienna. I'd highly recommend it. The bread in particular was really good, as were the fermented lemonades -- and the breakfast itself was very satisfying. A really enjoyable meal, cool atmosphere, nice ingredients and preparations. Also open for lunch and dinner.

Thai Issan Kitchen
It's hard to find somewhere that's open on a Sunday night. They had some Thai grandmas cooking the food in a kitchen that's visible through the front window, which made me think maybe having Thai food in Vienna wasn't an awful idea. And to be honest, it wasn't -- I really enjoyed it. We had recently been to Kin Dee (1 Michelin Star in Berlin) and I would say the flavors at Thai Issan were better (my wife disagreed) -- but of course they don't use the top quality produce / products which detracts from the overall meal. But the food there was comparable to what we ate (and enjoyed) in Thailand. I wouldn't hesitate to go back. It wasn't necessarily cheap (I think it was 50eur for 1 main each and a shared appetizer, 2 beers).

Langos at Retro Langos Bufe (a simple outdoor stall).
It was delicious. I think in Budapest, this is probably the way to go. Too much topping for my taste, but fried dough with sour cream and cheese is a real easy sell for me.

Koleves
Potentially tourist trap restaurant in the Jewish district, after reading some reviews and our tour guide recommending it as a place with good local food, we decided to try it. It was awful.

Mazel Tov
A hip israeli restaurant in the Jewish Quarter. It was okay/good, but not outstanding in any way. Not a bad option if you want a change of pace, but personally I wish we had made the trek to Budapest's Chinatown instead.

Bonus Research (additional restaurants to consider in each city):

2A Am Heumarkt
Wien, Wien 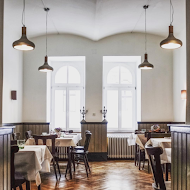 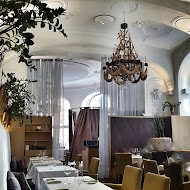