Last week I had my first visit to Guerra Meats out on Taraval. My mission was to pick up corned beef for St. Patrick's Day. Three types here: point cut of brisket, flat or center cut of brisket, or round. Guerra says they're the last practitioner in the City of old-fashioned artery pumped brining. Roberts actually popularized this, but now uses another injection system. Fully cooked corned beef dinners are also available.

The brisket is USDA prime, and the 7.5 pound point cut ($4.99/lb) hunk I bought might be the most marbled I've run across. The counter man separated three different whole briskets to find the size I requested and trimmed it down pretty well. A pack of pickling spices was $1.50. Then he carried my purchase out to the car for me. The atmosphere of the shop and the cute Italian butchers reminded me of Petrini's back in the day.

I cooked the corned beef yesterday in diluted Guinness Draught. I'd split it into two pieces. The part attached to the flat was done in 2 hours and 45 minutes, the second piece with the rest of the point took an additional hour to reach tenderness and soften up some hard streaks of connective tissue. The flavor's richly beefy. More interesting is how the salt levels varies through the meat, making each bite taste a little different than the last. The overall salt level is rather low for me, enough so that I added salt to the cooking water after tasting a test piece midway through cooking.

For smoking and barbecue afficionados, Guerra could be a good source for packer briskets. It makes corned beef year-round, starting a new batch every other week. The butcher said that it has briskets on hand almost all the time, but to call ahead.

I also bought some of the ready-to-cook marinated Korean short ribs. The seasoning tended toward fruity and was fairly mild. The meat was very beefy but much too chewy.

The deli was doing a brisk business in sandwiches. How are they? 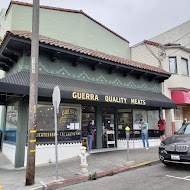 Salads are my Achilles heel...