Last year during Christmas week, I headed to the Sonoma Coast for bivalves. I was also interested in trying the crab sandwich at Gourmet Au Bay. But it was not available and I stepped over to its neighbor, Ginochio's Kitchen instead. I ordered the clam and scallop chowder. When Paul Ginochio at the register asked me if I wanted anything else, I replied that when I can have a larger meal, I'll come back to try the 14-hour smoked brisket. He offered me a sample and I indicated that I prefer the point end. He brought out my soup and the brisket to the table saying, "I thought you'd like a taste of the brisket burnt ends." I blurted out, "OMG! Be still my heart, how could you know how I feel about burnt ends? I'm a Kansas City Barbecue Society master judge, and burnt ends are the best part of KC barbecue." Well, then he brought out a sample of his pulled pork too and asked for my feedback. I told him I liked both meats, but the pork would be better with more smoke influence. He explained that he uses cherrywood and the pork shoulder and brisket go into the smoker at the same time for four hours of smoke contact. I found the pork a little overcooked and the brisket was on the firm side and could have used a little longer time. Using the same cooking time seems to be suboptimal for both. Still, it was refreshing to taste barbecue that did not have the injections that create a sameness of flavor in competition meats. The black pepper bark on the brisket was tasty, but not having the glaze baked on, these weren't really burnt ends. His sauce is from his friend, Rob's Smokin' Rubs. https://www.robssmokinrub.com/

We started talking about other BBQ places and he asked me if I'd ever been to Emil Villa's. Turns out Emil Villa was his great uncle, the brother of his own grandfather. His grandfather owned a bakery where his mother grew up working and she made Emil Villa's famous pies. So of course we got into a discussion of Emil Villa's brown barbecue sauce. He does not have the recipe nor does his mother. I shared with him my long ago convo with the late Bob Kantor, the founder of Memphis Minnie's about that sauce, and the debates on the internet of people who are trying to reproduce that sauce. He seemed to have an interest in reverse engineering it. I implored him to draw on the surviving family's taste memories to come up with something similar or even improve it.

And now that I know his mother came from a bakery family, I'll have to try his baked goods next. The chowder was too thick, perhaps reduced at the end of the day, but really tasty. I had almost added a little half-and-half from the coffee station, and should have. A fisherman delivered local rockfish while I was there that will become ceviche and fish tacos. The beef is grassfed from Stemple Creek. Good to know that suppliers are local.

* The quest for Emil Villa's brown barbecue sauce recipe <-- continue discussion of the recipe at the link below:
https://www.chowhound.com/post/ev-bro...

BBQ 101: How to Grill for Total Beginners

Points, Flats, and Packers: What's the Difference Between Brisket and Texas Brisket? 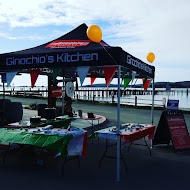