I recently called Francesco's, a preserved-in-amber 1961 Italian-American tavern in White Plains, "The Last Great Italian-American Restaurant" (I wrote about it, featuring porny photos, on my Slog (http://jimleff.blogspot.com/2017/09/f...), but I see I forgot to crosspost here, sorry!). I stand by that assessment when it comes to full-out Italian-American stuff, which is easy to find but excruciatingly hard to find good.

But there's Italian-American, and then there's Italian-Italian cooking...with maybe some American inflection. Don Peppe's, in Ozone Park down near JFK, is more along those lines. And it's just ridiculous, with a level of precision and perfection well above most of the cooking I've enjoyed in my life.

Don Peppe's is the sort of expensive cash-only place where elderly Italian men dine in track suits but the waiter demands you remove your hat. And I can't say I'm accustomed to $85 lunchs (including tip and a couple glasses of frigid "homemade" red wine). But, man, is it great.

I once devised a surprisingly non-ditzy system for rating foods on a scale of 1 to 10 (http://jimleff.info/eating-by-the-num...), and everything we ate here was tennish ("Absolute certainty that no one at this moment, anywhere on Earth, is eating anything more delicious than what you're currently consuming").

I didn't shoot photos because Yelpers have abundantly documented this place (see here: https://www.yelp.com/biz/don-peppe-so...). Let's go through the courses:

Baked clams are pulled from the broiler with a plus/minus .5 second tolerance. Another second and they'd have burned. There is nothing in the flavor of these baked clams that might surprise or intrigue you. This is baked clams 101, but the exemplar of the style. The sauce is tangy, but not so tangy that you'd remark on its tanginess. It's garlicky, but not to the point where you'd ramark on its garlickiness. Every parameter is optimized and balanced without any palpable effort. Not a bit of this is "impressive", it's simply as good a neighborhood Sunday-dinner-style representation as you'll ever taste, period, amen.

Linguini in white clam sauce has the same effortless sauce perfection. For example, the parsley is optimized for taste, not for visual; there's much less than usual, but it's precisely the right amount. But the pasta - oh, the pasta - is a master class in al dente. Cooked, once again, to a plus/minus .5 second tolerance. I imagine the chef watching the pot with enormous, bloodshot, violently locked-on cartoon eyes, but I'm sure it's second nature at this point. This doesn't mean, however, that decades weren't spent tortured with OCD, learning to get things just right.

Let's take a brief intermezzo while you digest the preceding, so I can debunk the biggest lie in food. Anytime someone tells you that the best cooking involves simply letting great ingredients sing, they are lying to you. Ingredients do not sing on their own, as any chef quickly learns. It's chefs - talented chefs! - who make ingredients sing, to the limits of their skill and diligence. Particularly great chefs erase their own tracks, so their efforts are not apparent in the final result, but this requires insane degrees of skill, talent, and hustle. You need to drive yourself crazy to cook effortless-tasting food. But, in any case, it's human skill and love that transforms ingredients into deliciousness, and don't let anyone tell you otherwise. A magic trick requires a magician, and a completely seamless magic trick requires a great magician.

Veal scallopini with lemon and butter featured, naturally, fork-tender veal, but it wasn't the overly tenderized version served by the usual show-off places, where the veal's more viscous than meaty. It's meaty-satisfying AND disarmingly tender. And while it's clobbered with butter, the copious butter doesn't scream for your attention. It's worked in and optimally balanced with the lemon and the garlic. Tracks erased!

All these dishes come with sauce studded with whole cloves of garlic, evenly golden and melting (though still substantial). They must prepare these separately, and toss them in during the sauté. You don't see that much.

Broccoli rabe ("broccoli" on the menu) was not denatured of its bitterness, which I appreciated. And it was tender without being overcooked or stringy. Again: non-remarkable perfection in all aspects.

I rarely order red sauce in restaurants, because paying for disappointment is not really my thing. But at this point my two companions and I still had some appetite (we figured from the high prices that these dishes would be family-sized, but not really), and we decided we trusted the house enough to take the risk. So I went against all my experience and training and requested a $25 plate of spaghetti marinara. Less dramatic leaps of faith were seen in Jonestown.

I honestly don't remember much about the sauce (all sauces here are unremarkable in the very best sense of the term; they are simply exactly what you want). But the texture of the spaghetti was to weep for. Again: a masterclass in al dente. What a difference a nano-second makes! My teeth have experienced non-stop phantom-spaghetti effect ever since. I am literally gnawing at thin air as I write this. My needy, sorry teeth never felt completely UNDERSTOOD before, in all my decades of life.

We skipped dessert, which surely would have been a letdown, and we pulled clutches of 20s from our wallets, and it was good.

Important note: we arrived at 3:30 on a weekday, so the place was nearly empty (waiters played cards at a big round table). The food might not have quite this degree of shimmering optimization at peak hours.

Next time, I want to try "Chinese chicken", a unique dish that apparently takes 55 minutes (not an hour; 55 minutes) to cook.

9 Easy Slow Cooker Pasta Sauces to Last You All Week 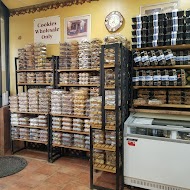 Went a little crazy at the apple farm stand!

Updated 1 hour ago 29 comments
Cookbook of the Month Cookbooks