A recent dinner at Chalkboard in Healdsburg was saved by the desserts. The end of our meal was so strikingly better than the many savory dishes we tried, I asked if the kitchen had a designated pastry chef. Yes, it does and his name is William Woodward.
https://www.instagram.com/pastryboy66/
http://www.winemag.com/2014/07/24/boo...

Linked below is the SF Chronicle's photo of "The Candy Bar", my favorite of the three we tried. A brownie bar with a dense layer of caramel under icing and flaked salt crystals, a tower of milk chocolate creameaux, and peanut crunch underneath the scoop of nougat ice cream. Next time I want one to myself.

I was also impressed by the "Butterscotch Banana Bread Pudding" with a lighter, almost airy body instead of a dense custard-y style that's remarkable for the chewy butter pecan fudge nestled in a puddle of creamy banana caramel on the side and the intense roasted banana ice cream.

"Pumpkin Upside-Down Cake" topped with cranberries and studded with walnuts was a bit too dry. The highlight of this dish was the root beer ice cream, that had more sarsaparilla pizzaz than most bottled root beers.

While I would have liked to see more fresh fruit options on the menu, the house style of confectionery and ice cream on each creation works on an individual basis. And desserts are only $10. I'd definitely come back for a seat in the lounge to have dessert at Chalkboard.

And I'll quickly run through the savory dishes our party of seven tried with pluses and minuses for the record.

SNACKS
+ Warm pretzels, $6, chewy and warm for dunking in a creamy cheddar cheese sauce with some spicy mustard too
- Pork belly biscuits, $14, excellent two-bite flaky biscuits, turned out seitan had been subbed for pork belly for the non-meat eaters and it was oddly spongy in texture and flavorless, goopy sweet cornstarch sauce that represents the worst of bad Americanized Chinese food

RAW
- Spicy tuna rolls, crispy panko crusting outside the nori wrappers was interesting, but the temperature warm, smelly, slimy, mushy tuna inside turned my stomach
- Golden tilefish crudo of the day, poor knifework, fresh-tasting fish and zesty citronette, but who thinks that slices of hard, raw zucchini should be served with delicate raw fish?
+ Big eye tuna poke bowl, half-inch cubes of red tuna, not too salty shoyu and sesame dressing, repeated wakame served with tuna rolls where another type of seaweed would have been a better choice

VEGETABLES
- Smoked eggplant, $12, fresh tasting basil pesto and San Marzano tomato sauce, housemade mozzarella cheese had already hardened on the plate even though I was the first person served, eggplant was undercooked, fibrous and tough.
- Roasted autumn squash, $9, brown butter, black garlic and too much added sweetener (maple syrup?) covering up the natural taste of the vegetable

SEAFOOD
+ Hamachi collar, grilled quite well with non-bitter charring and crisp skin, would have liked some wasabi or chile flakes to perk up the dressing

HOUSEMADE PASTAS
+ Nuvole, $18, my favorite of the five we tried, pasta cooked too soft but nice silkiness, umami bomb with black garlic, scallions and wild mushrooms plus caciocavallo
+ Ricotta & green gnudi, $17, a repeat of roasted squash on the plate, kale and a fierce amount of lemon juice in another creamy, buttery sauce
- Gramigna, $18, soggy waterlogged pasta but may be because this was the gluten-free version, tasty pork sausage with tender rapini, basil, red pepper flakes and pecorino, bathed in overly rich creaminess again
- Cocoa trifoglio, $24, overcooked pasta, chocolate tones of the cocoa came through stronger in this dish than in similar pastas I've had elsewhere, enjoyed shreds of duck confit but flavor overwhelmed by foie gras butter, hazelnuts and unchecked sweetness of madeira
- Squid ink pasta, $22, mushy pasta, dried out threads of out-of-season Dungeness crab, waste of grated fresh black truffles, another creamy sauce

Again, the only thing I'd return for here is dessert. Some posters have commented on the service lapses at Chalkboard. I'd say we had particularly good service, including a swap out of our share plates. However, we were there with a couple of regulars and might have gotten more attention.

Anyone else been to Chalkboard recently?

Husk On vs Husk Off: The Best Way to Grill Corn This Summer 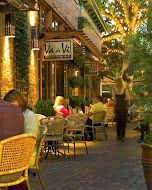 by Gretchen Lidicker | If you want make the best smoothie of all time, take these easy tips and tricks to heart. Too sweet...

Make Your Blender Clean Itself

by Chowhound Editors | Do you hate cleaning your blender because you have to take it apart and scrub around those sharp blades...

by Julie Boor | If you haven't tried it yet, grilled romaine lettuce is surprisingly delicious—here's what you need...

Squash Your Beef: Smashburgers Are Juicy, Crisp Perfection (If You Make Them Right)

by David Klein | A grilled hamburger is always great, but you don't need to take it outside for perfect results. Learn...

Your current preferred knife setup in your home kitchen?

15 Watermelon Recipes You Need to Try This Summer