I am in San Francisco this week for WWDC (Apple's Worldwide Developers Conference). I found out a few months ago I'd be able to attend, so of course, I made a list and asked for advice beforehand. Now that I'm here, I plan on posting a report as quickly as possible for each day, to stave off procrastination. [Previously: Day One (http://chowhound.chow.com/topics/977596), Day Two (http://chowhound.chow.com/topics/977726), and Day Three ([BROKEN LINK REMOVED]]

WWDC didn't have as many sessions today that I was interested in, so I ended up with a pretty epic day of eating! Starting in the morning, I finally made time to have breakfast in the Mission District at...

I ordered the one item at Craftsman and Wolves that had the most buzz among my friends, The Rebel Within, along with a slice of Kimchi Cake, and a Buderim Ginger Brew. Leaving the Rebel last, I tried the kimchi cake. I thought it was good, not enough heat for my own personal taste, but definitely had a kick to it. Since the "cake" is really more of a bread, and since the loaf was pre-sliced, it was a bit dry. The ginger brew helped with that, of course. I had heard that Buderim is one of the more spicy ginger beers, and indeed it was, but my personal favorite is still Maine Root's ginger brew.

The moment had arrived to try The Rebel Within. I bisected it with a knife, opened it up like a book on the plate, and as expected, some of the yolk flowed beautifully out of the muffin and onto the plate. I dug in and found the muffin to have a nice crusty exterior and a moist interior. However, I found the flavors to be lacking. Perhaps I was expecting a scotch egg-like experience, but for a baked good with asiago cheese, sausage, green onions, and of course the soft-cooked egg, I was a bit underwhelmed at how un-savory it was (not to be confused with unsavory, since it did not actually taste bad).

While I was waiting in line at Craftsman and Wolves, I noticed the party ahead of me carrying these beautiful glass bottles of bright colorful liquids. I noted the name on the bottle, tracked it down on my iPhone, and proceeded to...

Turns out that well respected Mission restaurant Range is a juicery during the day. Organic fruit and vegetable juices by Happy Moose Juice are available between the hours of 9 AM and 3 PM at Range. I was able to sample a few juices with obligatory cute names, like Chard Knock Life (chard, pear, orange, spinach, lime, ginger) and Beat It (carrot, beet, celery, apple, lemon, ginger), even a non-juice, the Vanilla Moose (almonds, dates, vanilla bean, sea salt, filtered water).

I ultimately decided on a Ginger Shot, 2 ounces of pure ginger juice! The people at Happy Moose Juice are not kidding around with this stuff. No sweetener's been added, nothing to cut the spice, though a less potent Ginger Lemon Shot is also available. This was 100% unadulterated ginger juice, filtered so there was no stringy pulp. It went down very smooth but then the heat creeps up fast. For a ginger nut like myself, this was great. I wouldn't say it was exactly refreshing, but it was eye-opening.

Jen, the juice-tender, was very affable, and we chatted about why I was in town, good food in the area (she brought up Ippuku in Berkeley; I mentioned La Ciccia), and a little about L.A. The spice had not quite subsided from my throat, so I decided to order an actual bottle of juice, the Refresh and So Clean, Clean (watermelon, cucumber, mint). After the Ginger Shot, this was an oasis, but actually I think this juice would be great mixed with a shot of ginger.

In our conversation about food, I mentioned that I had tried Bi-Rite and Mitchell's for ice cream. Jen suggested a place just up the street, called...

I couldn't try it just then, as I had to get back to the conference, but later that day after lunch, I went back. Xanath is the retail store for Vanilla Saffron Imports (http://saffron.com/), an importer of, you guessed it, vanilla and saffron. They make their ice cream with lots and lots of scraped vanilla beans. I tried a scoop, which had so much vanilla bean in it, it looked almost like black sesame ice cream. The texture was also a little "sandy" from the beans, but was a small price to pay (really, not a big deal) for just the richest, most fragrant vanilla flavor.

[Reports on the other places mentioned in the title will be coming up in Part Two, and possibly Part Three! May be a little slow on those. After churning these reports out daily, I'm running out of steam...] 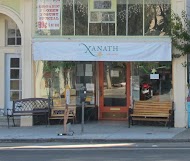 Is my biscuit supposed to look like this whole baking? (Oil coming out)

NOVEMBER 2021 Cookbook of the Month NOMINATIONS

Updated 2 hours ago 116 comments
Halloween Baking What Are You Baking? Fall