Apart from Center Street Deli and the surprisingly good, hole-in-the-wall Chinese place - " Anne's Congee ", the area around Promenade Mall, in my opinion, is a total culinary waste land. As such, I was curious and eager to give this place a try, when chowhounder ' Chester Elegante ' mentioned to me of this out-of-the-way Indian restaurant in Thornhill, offering some pretty good Indian fare.

Yesterday, a small party of 4, including myself and 3 other chowhounders - Estufarian, Juno and Chester Elegante descended on this quaint, cozy and clean eatery in the hope of discovering some nice Indian nosh! Based on the food we ordered, some of our wishes were partially answered. But, unfortunately, as with the majority of Indian places in the Markham/Vaughan/Richmond Hill area, overall quality and taste profile were only so-so. We detected a number of dishes, sadly using a generic, mother sauce to form the base of our cooking/dishes. We were hoping that the chef would create separate, aromatic, spiced base sauces from scratch, for our individual dishes instead....'wishful thinking?! Ha!'

A few stand outs to our meal included some gorgeous, piping hot and crispy Naans ( the garlic version being the best ), the nicely executed, well marinated and not overcooked Tandori fish ( this was a special request by Estufarian to test the skill of the chef ) and a fairly tasty Chicken Kahari.

On the negative sides were some overly battered Pakoras, Samosas and Onion Bajias....though the Tamarind base dipping sauce was really good. The Korma dish was a bit one dimensional and a touch disappointing. The cashew nut component did nothing to elevate or enhance the taste profile. The meat however was very tender. Chester Elegante commented that for some unknown reason, this dish looked and tasted totally different from the version he so thoroughly enjoyed a while back. Interesting??!!

Service, on the whole was friendly and efficient.

Overall bill of $103 for four, including 2 beers, was acceptable and IMO, very good value for the amount of food.

This is a decent and above average Indian place located in an area deprived of such offering. However, for Indian food craving, I will not make a special effort to come and eat here, opting for my current favorite ' Chauhan's ' over in Markham ( Woodbine & 14th ) instead.

A final note! As with past Chowmeets, though the food component is important, however, to me, it is meeting up with old ' foodie friends ' and the company that really counts! As such, the evening was a most enjoyable one!

Thank you Chester Elegante for organizing! Until next time! 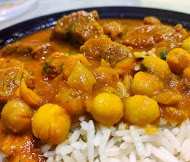 Updated 10 hours ago 8 comments
Cookbook of the Month Cookbooks