Upon this pitted fruit we feast.

Peaches, nectarines, cherries, plums, and apricots—here’s your guide to picking and preparing all the best summer stone fruits.

Summer brings a lot of things; lawless children with waaaay too much time on their hands, sweet sunsets caked in SPF 80, and a whole lot of stone fruit. Stone fruits—also known as drupes—are marked by a large stone-like pit (seed) inside and the sprawling category includes mangoes, lychees, and even almonds, but a few “summer stone fruits” shine brightest during the warm months of June, July, and August are gone long before our tans fade.

Peaches, plums, cherries, and apricots have relatively short growing seasons in North America beginning in spring and generally running no later than September 1 with some as short as a fortnight. In honor of these beloved, fleeting summer stone fruits, we thought we’d share a helpful guide including a breakdown of the many varieties, tips on how to spot a good (ripe) stone fruit, and of course a few recipes to make the most of your summer haul.

Related Reading: Why You Should Be Grilling Fruit This Summer

The most popular stone fruits and for good reason. Peaches are good eating alone or in desserts. You can grill them, bake them in a pie, or just grab a ripe one and go at it, though there’s nothing quite as bad as a bad peach, so choosing a good one and eating them in season is key.

In pop culture, peaches are so beloved when something is great or perfect, even, it can be described as “peachy” while in emoji language, peach, of course, means tuchus.

When are peaches in season?

May officially kicks off peach season and it runs through late September making them an ideal summer nosh. Most come from Georgia (“The Peach State”), South Carolina, Florida, California, and Idaho with the warmer climates coming in earlier, but many other states produce them as well.

Read more: What Is the Difference Between a Peach & a Nectarine?

How do I pick the best peaches?

Buy local! If you can buy from a farmers’ market, do it; otherwise ask the produce manager if any of the stockpiles came from a nearby farm. Or, find out what your closest peach producing state is and see if you can track those down, in-season.

Experts will warn not to squeeze peaches and nectarines since they bruise easily (gosh, so sensitive!) but rather give the skin a whiff and smell for a pungent sweet peach flavor. If you must squeeze them…do it gently.

Peaches should have some give but avoid a mushy or overly soft specimen. Better to buy underripe as you can let them ripen at home or put them in a brown paper bag on the kitchen counter to speed up the process.

How should I use peaches?

Besides the obvious (just biting straight into the thing), peaches make great additions to fruit salad, filling for a pie or cobbler, or the base for jelly or marmalade. Peaches grilled with a scoop of vanilla is one of the simplest summer desserts and a major crowd-pleaser to boot.

In savory applications try slicing and grilling them to serve with a pork loin, or dice into a spicy peach salsa to heap over chicken or fish or pile onto tacos. Or swap them in for heirloom tomatoes in a peach Caprese salad.

A medium-size stone fruit, plums are also popular both as a hand fruit and used in cooking, with just a bit more tartness than peaches and nectarines, generally speaking. There are over 2,000 varieties of plum, spanning a range of colors, tastes, and textures, and plums are produced all over the world (Asia being the largest producer). Most sport some pretty great health benefits, too, including loads of vitamin C and iron.

When are plums in season?

Plum season is similar to peach season with the best hauls starting in May and lasting through October, in some cases.

How do I pick the best plums?

A ripe plum will probably seem a bit heavy for its size. The smell test works too albeit not as well as with peaches. Too soft is also probably a bad sign and may mean it’s overripe—plums should be slightly more firm than peaches but not hard. And maybe you’ve noticed a thin white film on them. That’s bloom and it’s a good thing. It means they probably came from a somewhat local farm and haven’t been handled much. It can be easily rubbed or washed off at home.

How should I use plums?

Like most stone fruit they go great in fruit salads, tarts, or just eaten as is. Plum sauce is popular in Chinese cooking, especially with duck, though we also like a fresh plum sauce on a grilled pork chop. Or grill the plums and serve over a salad with goat cheese and walnuts. Plums sauteed or roasted with chicken is another popular way to work the stone fruit into dinner. Plum wine made from uve plums is popular in China and Japan as an aperitif, and dried plums (or prunes) are a sweet snack eaten the world over.

A personal favorite of mine within the stone fruit category, cherries are the ultimate summer snacking fruit. Nothing looks prettier than a bowl of bright red or yellow cherries in summer, and this itty bitty stone fruit packs a flavor punch used in everything from pies and ice creams to savory sauces, cocktail garnishes, and jams.

Ironically, one of the most famous cultural references to cherries, the story of George Washington confessing to cutting down his father’s cherry tree as a symbol of honesty, is widely thought to be untrue, while one’s ability to tie a cherry stem with just their tongue has a more lascivious meaning.

When are cherries in season?

Cherries have quite a shorter season than peaches and plums. Sweet cherries are generally available from May to August while tart cherries show up for just a few weeks in June (which is why you might forget about cherries until they are everywhere for a while during the summer and then vanish as quickly as they arrived).

Loosely, cherries are broken down into sweet and sour cherries with most varieties falling under sweet.

Related reading: 8 Ways to Use Your Cherry Haul

How do I pick the best cherries?

Look for cherries to be firm, brightly colored, and shiny with no signs of shriveling or browning, and a fresh green stem. Be less concerned about their ripeness and more concerned with whether or not they are juicy and tasty which largely depends on the season. Because cherries are so tiny you might try sneaking one from the bag to taste before purchase (but don’t say we told you to).

How should I use cherries?

Cherries pack a punch of flavor despite their small size. Cherry pie and ice cream are popular uses but cherries soaked in booze like Maraschino and Luxardo cherries play a role in cocktail culture, too. And don’t forget about savory applications. See a few of our favorite recipes to use your cherry haul this summer. 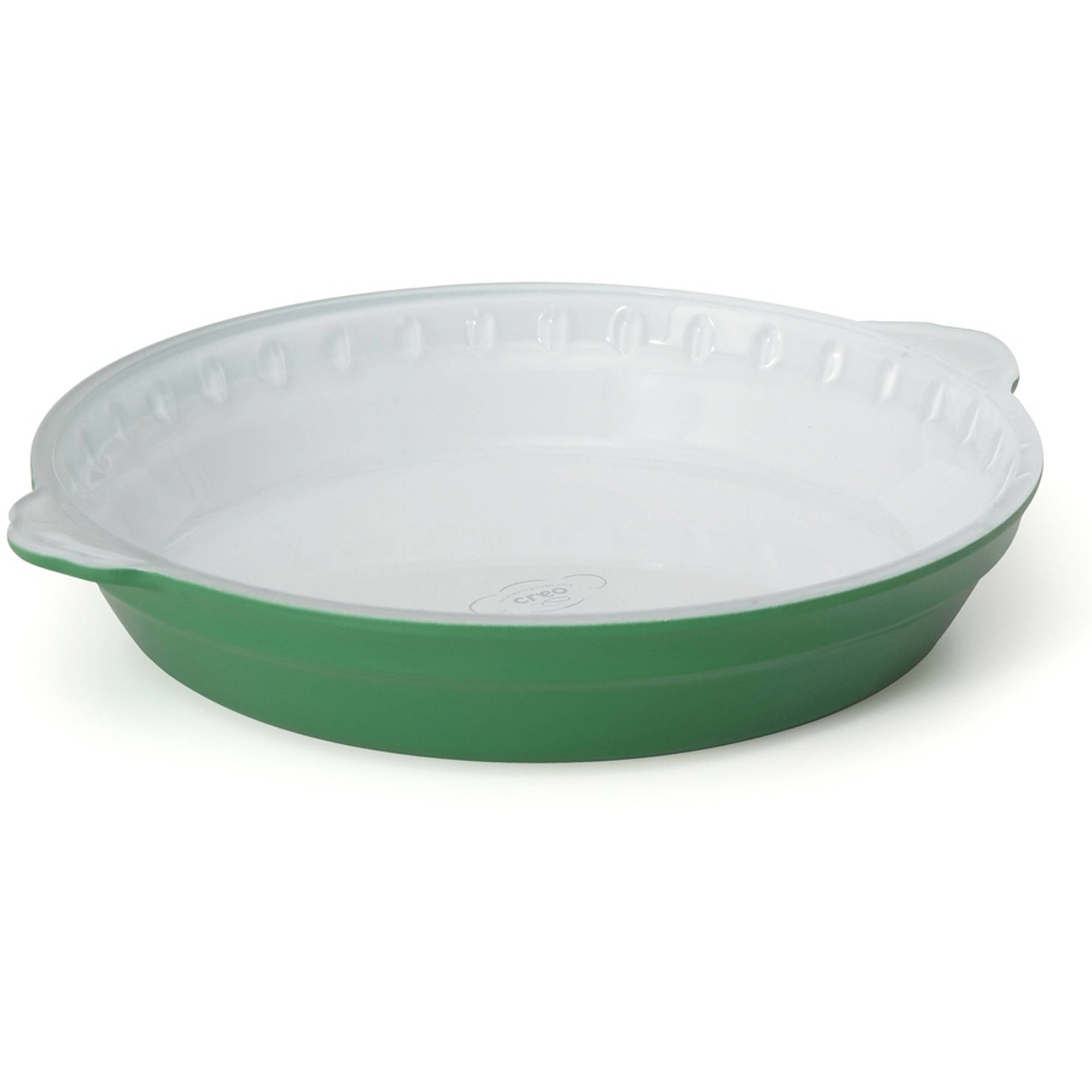 This light green pie pan is so pretty for summer!

Apricots look a whole lot like orange plums but have some significant differences in taste. They grow on trees, like all stone fruits, but are lower in overall sugar than most and are known for a heap of health benefits including fiber, vitamins A and C, and the antioxidant beta-carotene which improves vision.

They have a flavor similar to peach with a bit more tartness and are delicious when eaten raw but you’ll also find them dried or cooked down into jam.

Fill these classic glass jars with some homemade jam.

When are apricots in season?

Like cherries, apricots have a short growing season from early May to July. Almost all North American apricots come from California.

How do I pick the best apricots?

Look for bright orange apricots that are just slightly soft. Like peaches and plums you can ripen them at home in a paper bag or just set out on the counter. Once ripe, they should be stored in the fridge.

How should I use apricots?

Apricots are great eaten whole but because of their lower sugar content also work well in tarts and cakes, jams and jellies. Dried apricots are popular as a snack but also stewed in with chicken or made into a sauce or reduction.

Read More: The Ultimate Guide to Summer Berries | Eat the Rainbow: The Science Behind Brightly Colored Summer Fruit and Why It’s So Good for You

The Ultimate Guide to Cooking with Matcha