Pride Branding: Is All This Rainbow-Washing for Good or Greed?

There's a pot of gold at the end of this modern marketing rainbow.

As I watched the million bits of rainbow glitter cascade off a bottle of vodka and down to the floor having just removed it from an equally glittery box, three things occurred to me 1) I really do love glitter 2) “glitter” is a portmanteau for “gay litter,” and 3) we’ve finally reached critical mass for LBGTQ+ Pride Month branding.

If you live within a hundred miles of any Pride celebration (or have internet ) I don’t have to explain that corporate marketing around Pride has become more a rule than an exception, with more clever adaptations of the rainbow insignia than a Lisa Frank binder. And yes, sometimes it reeks of unfettered corporate opportunism because, well, mostly it is. But maybe that’s okay.

To be clear, it’s a sign of the times, and a good one, that public opinion has shifted in such a way that brands feel empowered, nay compelled, to fly their Pride colors as brightly as queer people, activists, and allies have for decades. Of course, few major (or minor) corporations make any decision about their outward-facing image without considering impact on the bottom line, and clearly, there’s a pot of gold at the end of this modern marketing rainbow. So yeah, the joy of seeing all this “rainbow-washing” in June is dually met with cynicism aaaand the occasional eye roll from me, and my cohorts, but at the end of the day, representation matters. Exposure matters. And so does solidarity, even if it’s instructed by a mix of motivations, not all of which are pure.

Speaking with Jehan Agrama, one of the founding members of GLAAD, the Gay & Lesbian Alliance Against Defamation, who happens to co-own a food brand of her own, Lemonette Dressings (California), she shares the same mixed sentiment. GLAAD along with groups like the Human Rights Campaign (HRC) have always kept a close watch and tally on brands who were there for the LGBTQ+ community in the darker days of marriage bans, and far fewer civil rights. A time when branding for Pride mostly didn’t exist.

Agrama still remembers goosebumps she felt seeing the iconic Absolut Vodka bottle, so famous for its clever advertising, adorned with a rainbow flag for the first time in the late 1990s. Ben & Jerry’s, which still maintains a solid score of 95 on the HRC’s corporate equality index, was another early adopter of LGBTQ+ support, offering benefits, protections, and promotions for queer employees as far back as 1989—long before it was popular. And when marriage equality finally passed they released a celebratory ice cream flavor called “I Dough, I Dough.”

As we moved through the beginning of the 21st century, and into a more accepting America, Pride month has presented an opportunity for food and drink brands to safely market to this “new” demographic as it came roaring out of the shadows, and many have done so with varying degrees of deftness. “In those early days, we liked being considered a new market because we were considered one for the first time,” Agrama remembers. “Just being considered at all was a major step forward.”

Today over 60 percent of the population supports marriage equality, and mostly because of that, rainbow packaging and swag are nearly ubiquitous this time of year. Everything from booze bottles to candy wrappers, clever social media images, and storefront decals, but of course, that doesn’t really tell much of a story on its face. Agrama suggests people “dig a bit deeper into a brand’s history, and more importantly what the current iteration of the brand is doing to support LGBTQ+ rights with donations, community outreach, and its treatment of employees (see the HRC’s index) if you want to be discerning about how, and where you spend your money.”

And if you don’t, that’s okay, too. For many in the community, that a brand chooses to embrace Pride at all is a win unto itself. Solidarity matters and visibility is powerful.

Certain brands with a long legacy of support wear their history of commitment to Pride like a (well-deserved) badge of honor. Tito’s Handmade and Smirnoff vodka, for instance, have both publicly supported LGBTQ+ causes for more than two decades, and continue to sponsor pride events nationwide touting their resumes, while Starbucks, another longtime ally, has a published timeline of key LGBTQ+ milestones & moments on its website.

Newer brands, without history to reference, have also worked to establish themselves as staunch allies with robust LGBTQ+ campaigns, mostly centered around Pride Month but some reaching past June. Snack bar company Kind created a special Pride nut bar donating all the proceeds to LGBTQ+ charity, for example, while Seattle’s Elysian Brewing released GLITTERis Pride Ale with actual glitter hiding behind the can’s label to be uncovered, flung in joy, and eventually dust-busted.

The full list of brands—even in the food & drink category—who are rolling out a Pride campaign of one sort or another would be long. Very long. So here are a few favorite old guard food and drink brands, as well as some new kids on the block, shining their rainbow colors, and giving back this June.

Smirnoff Vodka has been working on behalf of the LGBTQ+ community for decades and this year enlisted a veritable army of Pride ambassadors including Queer Eye’s Jonathan Van Ness, drag superstar Alyssa Edwards, and trans activist and actress Laverne Cox. In addition to sponsoring events in and around World Pride (NYC), in June 2017 the legacy brand launched its Smirnoff “Love Wins” bottles,  which feature an iridescent rainbow aesthetic and photographs of real couples and real love. For every bottle made, Smirnoff has pledged $1 to HRC totaling nearly $1.5 million by 2021!

Just Salad is an official sponsor of World Pride and has reintroduced The Big Gay Garden Salad with proceeds benefiting LGBTQ+ organizations. In addition to Pride activations throughout the month, the salad spot will be feeding hundreds of NYC Pride volunteers on Pride weekend.

Sugarfina, the innovative and Insta-sensation candy brand, will donate all of the net proceeds from online or in-store purchases of three rainbow candies to GLAAD.

Brooklyn Brewery’s Stonewall Inn IPA is brewed in support of  The Stonewall Inn Gives Back Initiative and is now in its 3rd year. The beer is available all over the US, in select countries, and of course in NYC to commemorate World Pride. The beloved outer borough brewery will also be hosting Pride parties, including a VideoOut SpeakOut Story Panel in their Tasting Room on June 27, and participating in the Pride Parade on June 30, side by side with Stonewall.

KIND has introduced a Pride Bar, with 100 percent of proceeds benefiting the Ali Forney Center, which protects and empowers homeless LGBTQIA+ youth across the country. This marks the first time in its 15-year history that the brand has changed its packaging. The Snack & Give Back Project, a multi-year program to inspire inclusivity, is a personal mission for Founder & CEO Daniel Lubetzky.

Tito’s Handmade Vodka, an Austin-based vodka producer, has long been a supporter of the LGBTQ community. Tito’s supports hundreds of nonprofits annually via the company’s Love, Tito’s philanthropy team. One of the first nonprofits that Tito worked with over two decades ago was Project Transitions, an Austin-based organization dedicated to serving people with HIV and AIDS.

Chipotle is celebrating Pride in perhaps my all-time favorite way with giggle-inducing “¿Homo Estás?” t-shirts. In addition to making me full out LOL, the Mexican fast-casual chain is donating a portion of proceeds to The Trevor Project, and hosting fundraisers for LGBT nonprofits across the country. You can purchase them here.

Starbucks‘ rainbow Pride cups hit store shelves this month in support of the 50th anniversary of Pride. As they’ve done in the past the coffee giant is also partnering with Lady Gaga’s Born This Way Foundation and will match donations to the foundation up to $250K. Born This Way helps increase access to mental health resources and support organizations that empower the LGBTQ+ community. Donate on the app or online here and find the brands full timeline of LGBTQ+ support here. 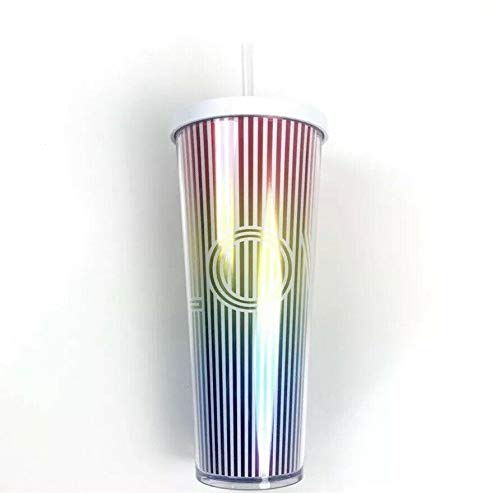 The coffee giant is teaming up with Lady Gaga to give back this Pride.

Absolut Vodka is bringing back its groundbreaking rainbow bottle and launched a multi-year partnership supporting GLAAD’s work in accelerating acceptance for the LGBT community. The vodka brand has also enlisted iconic pop photographer David LaChapelle to honor the spirit of Stonewall through an impactful image with EJ Johnson, Alexandra Grey, Sasha Velour, and his longtime muse and gay icon, Amanda Lepore.

Shake Shack is bringing back the beloved cake batter and sprinkle-bedazzled Pride Shake, and committing $25,000 to The Trevor Project, the world’s largest suicide prevention and crisis intervention organization for LGBTQ young people.

Goose Island‘s 312 Dry-Hopped beer can is wrapped in an iridescent label this year, reflecting back every color of the rainbow. The Chicago brewery is giving $1 for every can sold to Project Fierce Chicago, a grassroots initiative to create transitional housing for homeless LGBTQ+ young adults.

Tank Garage Winery released “Love & Pride” this month to celebrate pride. The edgy wine producer has committed to contributing at least $7,500 of the proceeds from “Love & Pride” to LGBTQ Connection via Tank Cares.