A Slice of Tradition: Wedding Cakes Around the World

There’s all the reason in the world to round out your reception with a wedding cake. It’s delicious, photogenic, traditional, and lucky, since it’s a fertility symbol (wheat, the basis of most flour, is associated with growth, harvests, and plenty), mixed with sweetener, like sugar or honey, which is meant to bring the newlywed couple a sweet life—and who doesn’t want that?

Top It OffThe Best Wedding Cake Toppers for Every CouplePlus, there are an infinite number of ways to customize a wedding cake and make it your own, from cake toppers to flavorings, to the type of cake itself. Wedding cake is so iconic that most cultures have their own version of it. If you dream of a bleeding armadillo groomsmen cake, “Steel Magnolias” style, Sugar, you go right ahead, bless your heart. But you might want to consider some even older cake-based wedding traditions that make much prettier desserts. Choose one that reflects your heritage, the country where you first fell in love, or your honeymoon destination—or just pick the one that looks most delicious, and auspicious, to you.

Norwegian almond cookies. In Norway we call these kranskekake. Follow the link in my profile ☝ for the recipe in both English and Norwegian #norway #cookies #kransekake #elskernorge

In Denmark, Iceland, and Norway, couples serve kransekake, “wreath cake,” a cone of successively smaller rings made of almond paste, confectioner’s sugar, and egg white. Iced with white glaze, and often decorated with sugar flowers, bows, crackers of the kind you see at Christmas, and/or flags, it’s light, tasty, and lucky, too, because, like a wedding ring and a good marriage, each “wreath” has no beginning or end. As an added bonus, the hollow center made by the tower is sometimes filled with candy or a bottle of aquavit.

At many weddings in Indonesia couples feast on a three-layer sponge cake called kue lapis sarabaya, which represents the ladder to success. It may be frosted and presented in tiers to look like a Western wedding cake (in which case, the pair cuts it from the bottom, not the top, so that they’re climbing the ladder of success together), but the interior is always the iconic three-layer cake, with two yellow, buttery layers sandwiching a cocoa-flavored dark one. After cutting, the newlyweds not only feed each other, to show that they’ll be sharing life’s experience from now on, but also serve cake to their parents and grandparents as a mark of respect. The same specialty is known in the Netherlands as spekkoek; it became popular there when Indonesia was a Dutch colony. 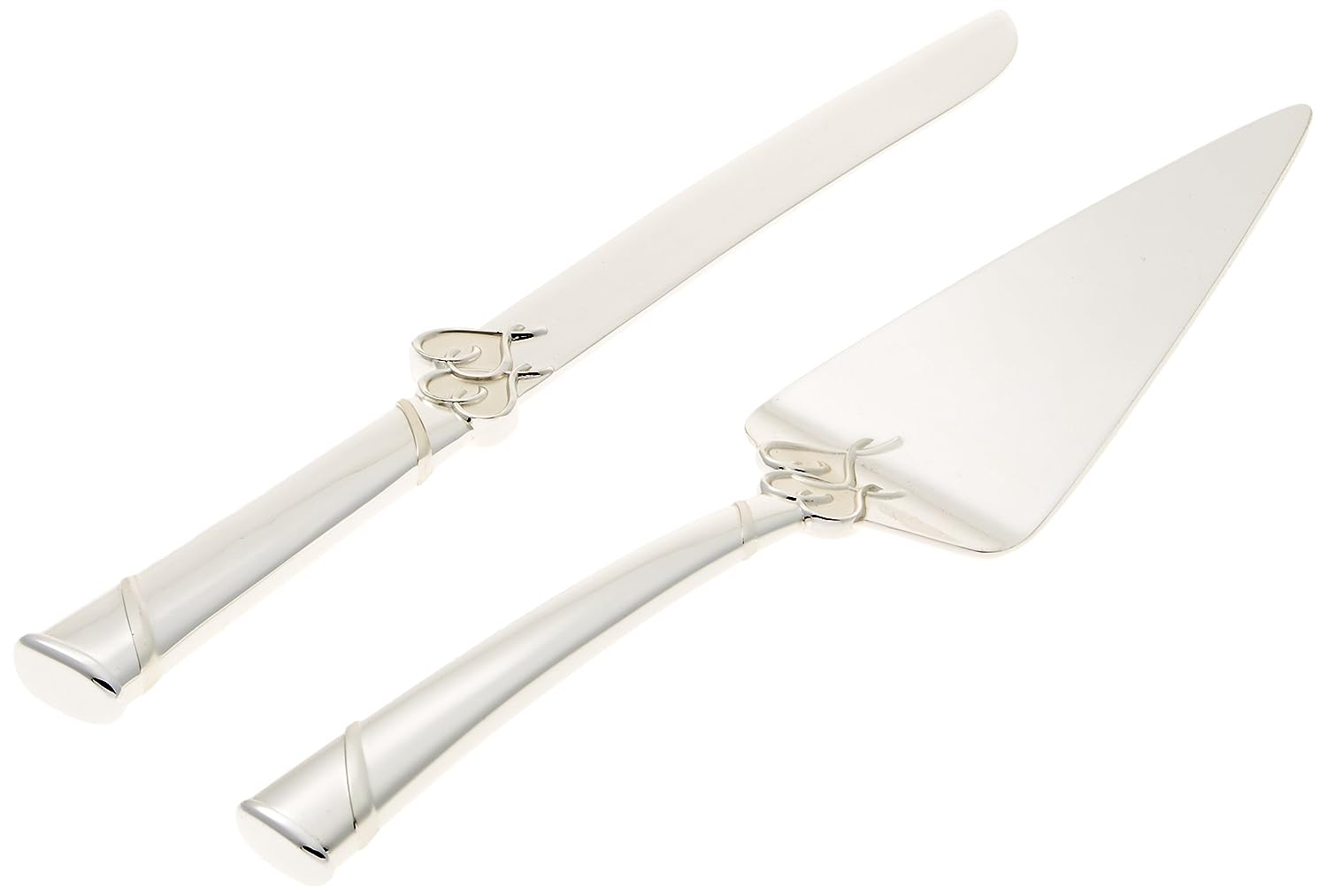 Can't have a wedding cake without something to cut and serve it.

Sri Lankan love cake is a delicious mash-up of sugar and spice and everything nice. Specifically, it contains fertility symbols including semolina, eggs, and cashews; the sweet touches of sugar and honey; and spice in the form of doce de chila pumpkin preserves—a Portuguese treat that was introduced to Sri Lanka when the country was a colony of Portugal’s—cloves, cinnamon, cardamom, vanilla, and rose water. Legend has it that its name comes from the fact that the grinding of spices and nuts make this cake a true labor of love. Often dusted with confectioners’ sugar, love cake is served wrapped in gold paper at weddings, so that guests can take some home as a favor, too.

German baumkuchen is made by rolling layers of honey-and-almond batter around a large skewer and baking on a spit, to achieve a ring shape (which, we don’t need to remind you, is a symbol of eternal love). It’s made with at least 15 layers, and the name translates to “tree cake,” because the rings resemble those in a tree trunk, bringing in another lucky symbol, as trees call to mind a family tree, rooted in the past, but growing toward the heavens. At weddings, baumkuchen may be stacked, glazed, or frosted for visual impact. And baumkuchen’s appeal knows no geographic boundaries: After a German baker brought it to Japan, mini baumkuchen became popular favors at Japanese weddings—a marriage of cultures in a cake!

In Lithuania, the traditional wedding dessert is sakotis, which is shaped like an evergreen tree because butter, egg white, sugar, flour, and cream dough is dripped over a rotating spit, creating branch-like protrusions. The name means “branched tree,” and what could be a more appropriate symbol of an enduring love that promises to be evergreen? Versions of the cake, which can range from 16-36 inches in height, are also found in Poland and Hungary, and for weddings, the “branches” may be decorated with sugar flowers.

The French wedding go-to is the ever-popular croquembouche, a pyramid of cream puffs linked by caramelized sugar whose name means “crunching in the mouth.” It probably dates back to the late 1700s, as it’s found in an 1815 recipe book by famed pastry chef Antonin Careme. The cream inside each pastry can be flavored with anything from vanilla to pistachio. In France it’s served with great ceremony (and sometimes fireworks shooting off the side of it). After the bride and groom cut it, it’s plated so that each guest is served three or four puffs.

Fertility symbols are stacked on top of each other in the traditional Italian wedding cake, millefoglie. The romantic name means “a thousand leaves,” which refers to the (less than 1,000) layers of puff pastry alternated with cream and fruit. It all adds up to abundance, which is what everyone wishes for the couple.

Many Congratulations to @princesseugenie and Jack Brooksbank ahead of tomorrow’s Wedding! Remembering this very special time in 2011 and the cake that a team at Fiona Cairns created for the Duke & Duchess of Cambridge – 6 weeks, 17 cakes, 8 tiers, over 8 people and 2.5 days to assemble on site in Buckingham Palace! We cannot wait to see the cake @sophiecabot is going to create! #princesseugenie #royalwedding #princesseugenieandjack #jackbrooksbank #princesseugenieofyork #royalfamily #london

Studded with the fertility symbols which give it its name, fruitcake is also soaked in alcohol, which preserves it should you want to save the top tier, a.k.a. “the christening layer” for the birth of any future heirs to your throne.

Eleni N. Gage is the author of "Lucky in Love: Traditions, Customs, & Rituals to Personalize Your Wedding," a collection of cross-cultural rituals meant to bring luck to couples getting married. The former executive editor of Martha Stewart Weddings magazine, she graduated from Harvard University with a degree in Folklore & Mythology before becoming a journalist and author. She lives with her Nicaraguan husband and their Greekaraguan children in New York City, where they bake a magic cake for luck every New Year's Day.
See more articles
Load Comments

11 International Dumpling Recipes to Wrap Up Dinner This Fall