Spoiler: they're both hard

Sohui Kim is the Chef/Owner of The Good Fork and Insa restaurants in Brooklyn, New York. This article is part of our ongoing spotlight for Asian Pacific American Heritage Month.

Sohui Kim knows a thing or two about juggling acts. The Korean-born, Bronx-raised immigrant chef and mother of two is in the midst of building a small empire of restaurants in North Brooklyn. Chef Kim, with support from her husband and business partner, Ben Schneider, operates two beloved yet starkly different restaurants, with plans to open a third in the fall on the site of one of New York’s oldest and most iconic culinary landmarks—the old Gage and Tollner building. Though anytime is a good time to catch up with someone as thoughtful, accomplished, and talented as Kim, with Asian American Heritage Month and Mother’s Day both looming in May, what better time than now?

Speaking with the James Beard-nominated Sohui Kim between stints in the kitchen preparing for weekend service, she seems effortlessly fearless. Having done more in the business (and life) in just over a decade than some ever will, if there is any residual exhaustion Sohui hides it well. I was interested to find out how she so seamlessly ties together the threads of her past, present, and future, creating food that is interesting both to her, and notoriously fussy New Yorkers, but also representative of a unique cultural experience. Oh, and quietly raising a family while nobody’s looking.

Kim’s first restaurant, The Good Fork, which opened in 2006 in lively Red Hook, is still going strong as a cozy neighborhood favorite for quiet dates and casual family outings. To call it a “Korean” restaurant might be a stretch, though many of the “New American” classics that dot The Good Fork’s menu are adapted through her Korean lens, like a savory scallion pancake appetizer with English peas and mint, or Ramen Bolognese, a playful meeting of the east and west. Her second spot, a Korean barbecue and karaoke outpost called Insa (also in Brooklyn) is more decisively a product of Kim’s original roots, and a pulsing source of pride, but it wasn’t always in the plan.

Packed with Kim’s recipes for flavorful, globally inspired cuisine that a home cook can make any night of the week.

Kim began later than most in the industry. After her family moved from South Korea to the Bronx in 1981 she was shuffled off to Bowdoin and Barnard to chase “the immigrant ivory tower” as she calls it, a dream invented by her father who passed away when she was a teen. She earned herself a steady and well-paying corporate job out of college, but just before turning 30 decided it wasn’t a good fit, and after a flurry of raves from dinner parties she’d thrown, realized it was cooking that called to her. Kim enrolled in one of the speedier programs at the Institute of Culinary Education (ICE), learning technique, but also business management skills that she still pulls from today. Following a series of high-level internships and cooking jobs at upmarket operations like Blue Hill at Stone Barns and The Savoy, Kim and her husband/partner decided to jump headfirst into the restaurant world themselves.

In March of 2006, husband Ben, who worked in restaurant contracting at the time, found a small storefront right near their home in Red Hook, and the two were off to the races.

If you’ve ever been party to a restaurant opening OR parents having their first child you’d know that doing either one seems logistically impossible on its face. Somehow Kim did both at the same time between 2006 and 2007.

“You just have to do it,” she says, “and really want to do both things badly because neither one is easy.” It took the doctor eventually kicking Kim out of the kitchen as her pregnancy neared its final stages, but it really does take a village, and she credits the great team around her and her husband, of course. But don’t misunderstand the seemingly un-flummoxable Kim; nothing about it was easy, and given a “do-over” Kim says she might have (definitely would have) slowed things down with that first restaurant opening— a luxury she has been afforded in more recent projects.

A Few of Her Favorite Things

One of Kim’s favorite kitchen tools is a capsule infuser she found at Asian Home Mart. “It looks like a very large tea steeper, made of stainless mesh and I use it to put herbs, parm rinds, whole spices, lemon peel, etc… to infuse sauces, ragus, and soups. No need for cheesecloth and it’s washable and reusable!” She also praises her peeler and zester as “an indispensable tool in any kitchen.” 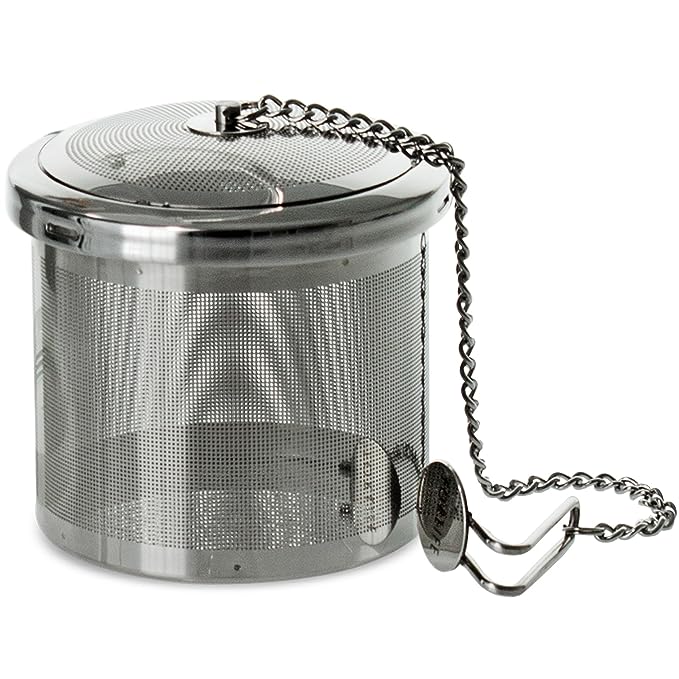 Chef Kim recommends a large reusable steeper instead of cheesecloth for your infusing needs.

On Opening a True Korean Restaurant

Korean wasn’t always her natural culinary inclination, as evidenced by the New American style that dominates her first venture, The Good Fork. But something changed when she had kids. Six years after The Good Fork, Kim and Schneider opened Insa, a Korean barbecue and karaoke restaurant serving traditional fare like bibimbap (Korean rice bowls), japchae (sweet potato noodles), and kimchi and pork stew in South Boerum Hill.

“It doesn’t get much more Korean than bibimbap, barbecue, and karaoke,” jokes Kim, but it wasn’t a total no-brainer to go full force Korean on her second project. “Taking our kids on destination outings to all the great Korean spots in Flushing (Queens) and Manhattan, eating Bonchon (Korean chicken) and noodles, made me realize how important it was to have an outlet for our roots to blossom. Something about the immigrant experience is so important to me, and was something I really wanted them to have too.”

Growing up [mostly] in New York City Kim had more access than most American kids to Korean food and culture, “but still,” she says, “it’s nothing like what you’re seeing today. People have the knowledge or are asking about Korean food in a way I never thought possible. I mean, people actually know what bibimbap is!” she glows knowing she’s part of the reason. Insa has been a big hit in the restaurant-riddled neighborhoods of North Brooklyn but, she notes proudly, “there really wasn’t much of a Korean culinary presence before we opened Insa, and people really seem happy that there is.” Two big shiny stars from the New York Times doesn’t hurt either.

On Family and Reconnecting with Her Roots

When it comes to cooking, if you’ve received your initial training from the Institute of Mom or Dad, there is little hope in trying to unlearn their lessons, and little sense in it either. The melding of world cultures is something that makes this country unlike others and truly special. Kim was classically trained and admits she fought off instincts to “cook Korean” but now can hardly imagine life in the kitchen without kimchi or soybean paste. One menu favorite Kim alludes to as an example of having been made better by virtue of having been made Korean: the steak tartare at Insa, which she punches up with soy sauce, sesame oil, and Asian pear, all topped with nori crisps.

Tender, juicy, pleasingly chewy… our steak tartare is mixed with refreshing asian pear and topped with a creamy golden egg yolk. We finish it with toasty black sesame seeds and serve it with crunchy, sweet and salty shrimp nori chips. Dig into our #yukhwe while sipping on our Pear Blossom cocktail and toast to the weekend! #insabrooklyn . #InsaEducates : Yukhwe is Korean steak tartare and it’s origins can be traced back to the 19th century! It is traditionally served with korean pear and egg yolk, and is a popular #anju (drinking snack).

2018 was a big year for Kim and returning to her roots. She released her second cookbook “Korean Home Cooking” which serves as both a guide to Korean food as she knows it, as well as a journal of her experience as an immigrant turned chef, turned mother, turned arbiter of one of the worlds great cuisines.

In December she returned to South Korea for the first time in 18 years, bringing her family with her. Kim brought her husband and kids to see her childhood home where her mother used to throw fabulous dinner parties of her own. She was delighted to see the house still standing, mostly unchanged but knowing how far she’d come from this starting point. “A full circle moment,” as she calls it, and affirmation that all of this hard work had always been about “something bigger.”