What Is the Difference Between Pozole and Menudo?

Pozole and menudo: both classic Mexican soups with hominy and meat, but some major differences.

What is the difference between pozole and menudo? One has a stomach-churning past, the other is actually made with stomach. But they’re both a pair of soul-satisfying soups that also happen to be two of Mexico’s most iconic dishes.

When it comes to pozole (also spelled posole), a hearty combination of rich broth, meat, corn, and spices, its cultural significance has especially deep roots that date all the way back to the Aztecs. The soup’s name derives from the Nahuatl word for its signature ingredient: hominy, which is dried corn treated with an alkaline solution resulting in chubby, chewy kernels.

Hominy’s importance in the dish wasn’t simply a matter of flavor and texture. Corn was considered a sacred crop by the Aztecs and pozole was largely reserved for special occasions, which brings us to that stomach-churning portion of its history. The Aztecs were known to engage in human sacrifice and pozole would often play an integral part in the ritual. I think you know where I’m going this. If not, let’s just say they did not want to let any meat go to waste. (Pozole was prepared with human flesh, just to be clear.)

Of course, the recipe has evolved since its ancient origins. When the Spanish introduced pigs to Mexico, pork became the primary meat found in pozole. (Some claim that pork was a welcome substitute to human because they’re similar in taste—I’ll take those people at their word.)

Today, the preparation of pozole varies from region to region and even household to household (some people swear by pig’s head; others prefer the shoulder; then there are those who opt for chicken). Generally, the soup is divided into three varieties broken down by the colors of the Mexican flag: the standard white pozole; a version prepared with green ingredients such as tomatillos, cilantro, and jalapeño; and a chile-infused red version.

Though pozole is now enjoyed any day of the year, it remains a staple for special occasions and is a particular favorite on New Year’s Eve.

Time-intensive menudo is also served during major celebrations but it’s most famously known as a dish that is served the day after the party. Though there’s no scientific proof to back it up, the soup is renowned as a hangover killer which is why it’s such a popular daytime option on Saturdays and Sundays. If you find yourself at a Mexican restaurant for weekend breakfast or lunch, it’s almost a guarantee you’ll find someone slumped over a bowl of menudo, eager to wash away the pain (and regret) that lingers from the previous evening.

Like pozole, menudo is prepared with hominy, but its main source of protein is cow. The stomach lining, more commonly known as tripe, is the star of the dish, which often features a supporting cast of other cuts including beef tendon and feet of both the cow and pig variety. Here in the United States, eating tripe, like most innards, is often considered a hard pass, but a spoonful of menudo can change the mind of the skeptics. As the tripe simmers for hours in a fiery red broth redolent of chiles (if you can’t take the heat, seek out the white version), garlic, and spices, it becomes tender like calamari while sponging up all the flavors that envelop it. The finished product is spicy, complex, and packed with flavor.

While pozole and menudo are sufficiently slurpable on their own, an assortment of additions such as Mexican oregano, sliced radishes, chopped onion, cabbage, tortillas or tortilla chips, avocado, and a squirt of lime juice provide the exclamation points for these intoxicating bowls of homey goodness. 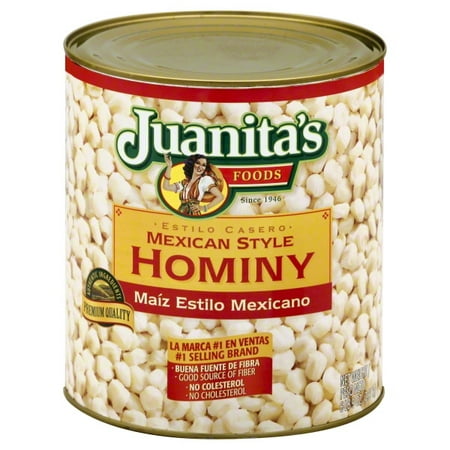 Whichever soup you're making, you're going to need hominy, and plenty of it.

Dried hominy is traditional, but canned hominy is convenient, and tastes great in this spicy broth infused with dried chile peppers and plenty of garlic. Get the Mexican Menudo recipe.

Mexico in My Kitchen

This white menudo includes a tiny bit of mint, but most of the flavor is from garlic, onion, and the slightly earthy tripe itself. Get the White Menudo recipe.

This rich red pozole is packed with tender pork shoulder and hominy, and gets a flavor boost from a homemade enchilada sauce. Pile on as many toppings as you like. Get the Pozole Rojo recipe.

Tomatillos, jalapeños, and cilantro make a flavorful green broth, and this version uses shredded chicken instead of pork, but of course includes hominy. Get the Chicken Pozole Verde recipe.

The standard white pozole is less spicy but just as satisfying, and just as suited to garnishing with lots of fresh, crunchy, and creamy additions. Get the Pozole Blanco recipe.